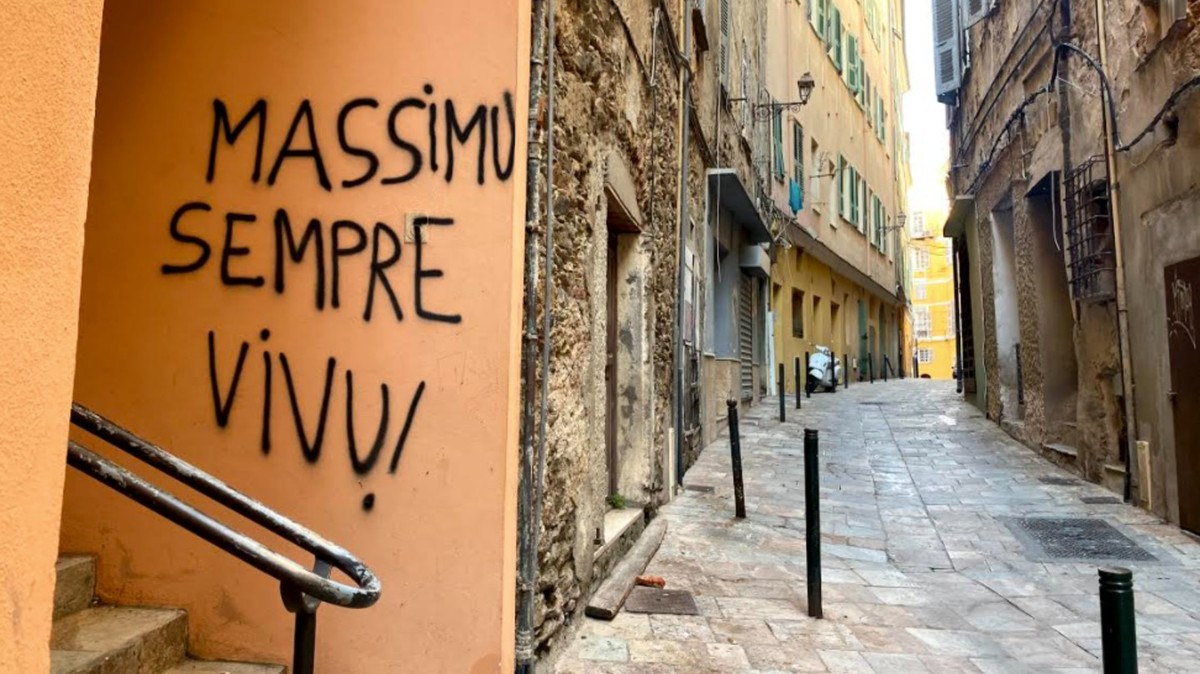 AJACCIO, France – Massimu Susini was murdered on his way to his seaside restaurant around 8 a.m., killed by a shotgun fitted with a telescopic sight usually used to hunt bears.

Nearly two years after his death in September 2019 in the Corsican town of CargÃ¨se, French prosecutors have yet to identify Susini’s killer, who burned and abandoned a fleeing car on a nearby coastal road.

But despite the lack of progress in the official investigation, Susini’s uncle, Jean-Toussaint Plasenzotti, is convinced that the murder of his 36-year-old nephew, a well-known political activist and environmentalist, was carried out by a gang. criminal based in the Corsican capital Ajaccio. “I have not heard from investigators at all,” he said. “But the Mafia was behind it all.”

Corsica, an island in the Mediterranean in the south-east of mainland France and one of France’s 18 administrative regions, must elect the members of its regional assembly on June 20 and 27. Ahead of the crucial election, activists told VICE World News that powerful criminal gangs operate with impunity on the island and that politicians refuse to talk about the Corsican mafia – or even acknowledge its existence.

“Some politicians are scared, others look away and don’t want to interfere [matters involving the mafia] and others are accomplices, â€said Plasenzotti, who created the Massimu Susini Collective, an anti-Mafia campaign group, after the murder of his nephew. â€œThe reality is that organized crime is at the heart of Corsican life.

Civil security teams clean the Corsican beach of Scaffa Rossa in Solaro, after the arrival of pollution from a presumed illegal degassing of a nearby ship. Photo: PASCAL POCHARD-CASABIANCA / AFP via Getty Images

In an attempt to force the hand of politicians in the run-up to the vote, another campaign group, the Collectif Maffia No ‘, a Vita IÃ¨, is pressuring the candidates to expose their policies against the Mafia. But progress has been limited, with responses received from fringe parties, including the environmental group Ecologia Sulidaria, but no key political figures such as Ajaccio mayor Laurent Marcangeli.

â€œWe want to make it a priority,â€ said LÃ©o Battesti, co-founder of the Collective Maffia No ‘, a Vita IÃ¨, which was created in 2019. â€œAll elections are important, but this one in particular. de Corsica has a power that it has never had before, they will have a lot of funds and it is likely to be infiltrated even more by the Mafia.

Since the creation of the new regional administration – the CollectivitÃ© de Corse – in January 2018, greater financial resources have been delegated from the national government to the regional government. As a result, Corsican civil servants now have an operating budget of 1.2 billion euros (around 1 billion pounds sterling) for its 350,000 inhabitants.

But critics worry about a lack of action. The Collectivity has never held a debate on the subject of the mafia and in an interview with the French television channel Canal + last year, Gilles Simeoni, president of the executive council of the Collectivity of Corsica, denied its existence. Simeoni, currently leading the polls, is part of a pro-nationalist movement calling for greater autonomy for Corsica.

â€œIs there a mafia in Corsica in the sense of a Sicilian mafia, that is to say a structured, pyramidal, military organization, with strategic and institutionalized decisions between political and economic powers? He asked. “Quite frankly, I don’t think so.”

Experts recognize that part of the problem lies in the nebulous nature of the Corsican Mafia, which lacks a clearly defined structure in line with stereotypical criminal racketeering. “They expect it to look like the Sicilian mafia with a specific structure and format, but this is not the case with the mafia in Corsica or even in Italy,” said Fabrice Rizzoli, expert in Corsican mafia and president of the Crim ‘association. Stop. â€œThere is not a fixed gang but several dispersed groups that are linked by their illegal behavior. But the impact of their actions is undeniable.

For decades, the Corsican mafia has had a hold on the French island, raising money and influence through racketeering, trafficking and other illicit activities in sectors such as construction, real estate investment and waste disposal. Those who annoy local gangs often face a grizzly end: Corsica is the murder capital in France – with more than triple the murder rate than in the Paris region – and over the past two decades the Mafia has been trolling profile of the murders of four mayors.

“The dominant feeling in Corsica is fear,” Plasenzotti said. â€œThe Mafia terrorized people in a culture of silence. “

But according to Rizzoli, while banditry has long reigned in the poorest rural areas like Corsica, or Sicily and Calabria in Italy, globalization and mass tourism have brought new levels of wealth to the regions – allowing mafia to thrive while enjoying activities less risky than traditional mafia crimes such as drug trafficking and armed robbery.

â€œWe shouldn’t overstate the novelty of the Mafia,â€ said Rizzoli. â€œBut his influence on the island has never existed at this level before. The great danger is that the Mafia becomes part of the legal economy.

Instead of the overt violence seen in previous generations, analysts say the Corsican Mafia now operates in more subtle and less visible ways, believing its greater influence on the island. “It is not among these odious acts that we can measure real power,” said AndrÃ© Fazi, lecturer in political science at the University of Corsica. â€œIt is influence in politics and in society. The Mafia has a sprawling influence and it has infiltrated the government.

For Fazi, this means that the next election could lead to even greater Mafia infiltration of politics. “It is very worrying,” he said. â€œAlready, it is very easy to imagine a mayor being assassinated if he refuses a building permit.

But Susini’s murder is seen as a turning point by activists, and ordinary citizens are leading the response against the Mafia. The Massimu Susini Collective and A Maffia No, a Vita Le were both set up after his death and popular outrage is evident on the walls all around CargÃ¨se, Ajaccio, Bastia and other Corsican towns, with graffiti bearing the words “Massimu Vivu” (Massimu Of Lives). â€œWe want to mobilize the people,â€ Battesti said. â€œIt is thanks to citizen mobilization that there has been a positive development. But that’s not enough.

Signs of progress were visible when in January 17 people linked to the Ajaccio-based gang Le Petit Bar were arrested for the alleged laundering of â‚¬ 48million (around Â£ 41million). But the threat of the Corsican mafia is far from having disappeared. In February, amid debates on the management of the waste sector, subject to Mafia influence, four garbage trucks in the municipality of Lisula-Balagna were set on fire. Then, earlier this month, several restaurants and bars across Corsica were set on fire within 24 hours, and last weekend flames ravaged the port of Sagone, destroying seven boats, including one belonging to Christophe. Versini, militant of the left. Corsica Libera political party. “These abuses, the criminal origin of which does not seem to be in doubt at the present time, are added to the list of pressures and violence suffered by Corsican society,” Corsica Libera said in a statement.

A boat set on fire in Sagone. Photo: Jean-Guy Talamoni

But as tolerance for the Mafia wanes in some parts of the population, in others, experts warn that the lure of gangster life is growing for those who live in an area that remains the poorest in France and where 20% of the population lives below the poverty line. . “The mafia succeeds in generating wealth,” Fazi said. â€œThe challenge is to overcome a system that is already so powerful. “

Activists say Corsican politicians must quickly introduce policy to tackle the scourge of the Mafia, especially given the very low levels of prosecution for violent crimes in Corsica. “There is blatant impunity for these murderers,” said Rizzoli. â€œThe state needs to be much more efficient in delivering justice. “

Among the measures that Plasenzotti said should be adopted include a law to specifically sanction Mafia killings, legislation allowing the state to redistribute confiscated property from the Mafia, relaxation of restrictions to allow former Mafia informants as well as a parliamentary commission to investigate the existence of the mafia in Corsica. â€œUntil then, we cannot speak of justice but of the semblance of justice,â€ Plasenzotti said. “And I won’t stop until we get justice for Massimu.”

The CollectivitÃ© de Corse, the deputy for Corse-du-Sud, Paul-AndrÃ© Colombani, and the Specialized Interregional Jurisdiction (JIRS) of Marseille, responsible for leading criminal proceedings in Corsica, did not respond to a request for comments. .