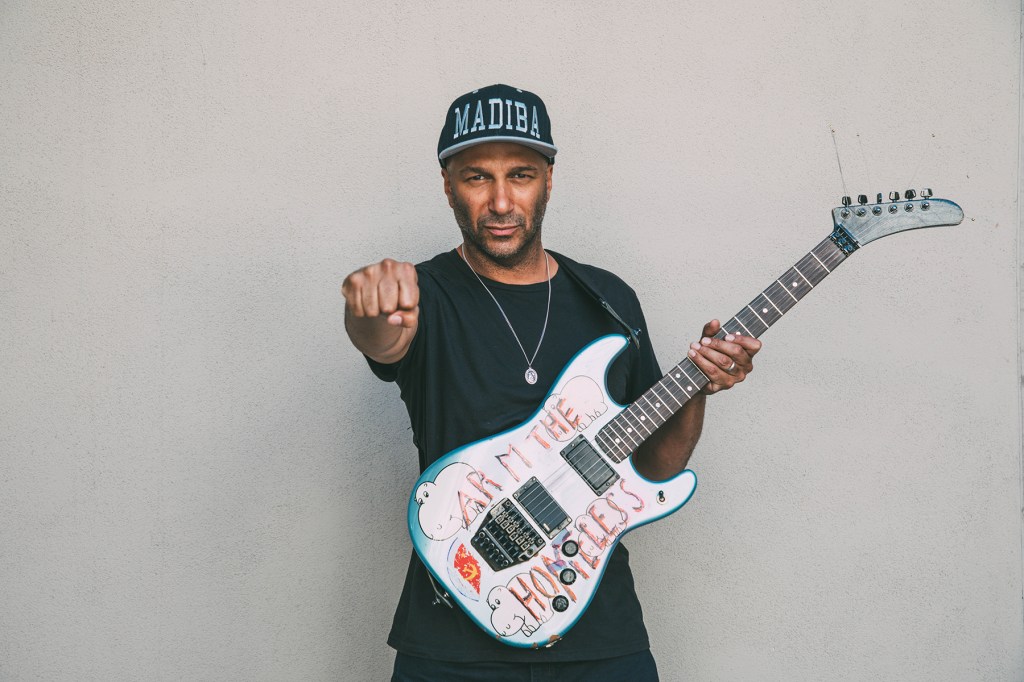 BROOKWOOD, ALABAMA— Tom Morello is used to playing arenas, and now that Rage Against the Machine has returned to life as a touring unit, he’s spent the last few months rocking in front of oversized crowds with a full show and many bells and whistles. It’s business as usual for him, but yesterday Morello found himself in a very different environment, playing for a very different audience, for a cause close to his heart. He was there to show his support for the 1,000 members of the United Mine Workers of America (UMWA), who were striking at the Warrior Met Coal in Alabama since April 1, 2021, and who have endured month after month hardship, uncertainty and violence from a Wall Street-backed corporation that seems determined to starve them. Eighteen months into their grueling battle with coal bosses, the miners are still holding the line, but are in desperate need of Support. After Morello caught wind of their struggle through a hazardous Twitter exchange with UMWA, he made a few calls, grabbed his guitar, and hopped on a plane.

Brookwood is a long way from Los Angeles, but even before the rally began, it was clear that Morello — a workers’ rights advocate who grew up in a mining town and is proud to be a member of not one, but two unions – felt like home. He’s no stranger to a picket line or a protest, and has been a pro-union voice for decades. The rocker dropped by the strike pantry earlier in the day to help pack bags of groceries and visited striking miners on the picket line, listening intently to their stories as the breakers’ trucks strike rumbled. When the rally began at 6 p.m., it was greeted by a wall of union-brand camouflage clothing; instead of a mosh pit, the evening ended with a prayer. Admission was free, as were the 800 hot dogs that the ladies’ auxiliary had painstakingly prepared as refreshments for the evening.

As he stood on the rickety wooden stage that had been hastily erected in front of the union hall earlier in the day, Morello surveyed the hundreds of coal miners, retirees and their families who had sprawled into the grass in front of him, and smiled. . “My name is Tom Morello and I am a trade unionist!” he roared, unleashing a half-hour of acoustic fury that saw him release several originals (including the very apt “Union Song” and “Hold the Line”) as well as covers of the haunting ode. Steve Earle’s coal mines “The Mountain,” which he was performing live for the very first time, and a rousing rendition of Woody Guthrie’s “This Land is Your Land” that saw him invite a dozen miners on stage to help him shout the chorus. This last moment of joyful and sweaty togetherness made it clear that even if there was a real rock star among them, everyone knew it was not about him that night. It was about them.

This interview has been condensed and edited for clarity.

What brought you to Brookwood, Alabama tonight?
I’m here specifically because I tweeted something about a strike or my support for labor more generally and then a gentleman involved with the United Mine Workers in that Alabama strike retweeted me and said, “Hey sir, I’m so interested in the labor movement, we’ve been on strike for over 500 days. Why don’t you come to Alabama? I retaliated and said, “OK! “It’s honestly super easy. If you have a strike that I can participate in and no children’s football game prevents me from doing so, I will come!

The big picture is that I am a longtime supporter of radical working class movements, and United Mine Workers have inspired me for decades. I am a member of the Los Angeles Musicians Local 47 and the Industrial Workers of the World, and I firmly believe that the best chance we have of overthrowing injustice is through working class solidarity. And here, where people have sacrificed so much and put their families and their lives and their well-being on the line for a year and a half, this is a place where I can definitely take a few days of my life to go and play some songs for help put some steel in the spine on the picket line and roll up the sails of the strike if I can.

You have a personal connection here too; as you mentioned on stage, your family were coal miners and you come from a small mining town.
The Morellos were coal miners. My great-grandfather, Quinto Morello, and his four brothers came from Italy to mine coal in central Illinois; they landed in Marseilles, and worked all their lives in the Marseilles mine. The stories that filtered down through the generations were that these guys got up in the morning before sunrise, went into the mines, worked their 12, 13, 14 hour shift and got out of the mine after the sun. had come down. Throughout their working lives, they never saw the sun and never knew their children, because they worked seven days a week and spent their whole lives toiling underground, because they had no no union to defend. them and to help them defend themselves. This is one of the reasons why I have always been a passionate union activist and why a coal miners’ union strike is of particular interest to me.

And yet, as we see with this strike, with these workers trying so hard to carve out a decent life for themselves and their families, so little has changed in these mines.
Whatever rights and protections exist, it is because of unions and because people have sacrificed and fought in the past, just like these Alabama United Mine Workers are sacrificing and striking now. It’s just one more link in the chain. The dynamics are the same. It is the insistence on the supremacy of capital that holds them back. The bosses have spent 10 times more to break up the union than they could have spent to accede to the legitimate demands of the strikers. The idea is that they will not submit to alternative power in the workplace. They must be the sole decision makers of what workers’ lives are like, and they will use misinformation, and they will use the press and they will use the courts and the legislature and all their power and prestige and underhanded tactics to undermine the demands workers.

A few things I heard over and over again was one that these miners are not going to give up; this mine has been devastating to them, it’s been devastating to their families, and they’ll hold on forever, if that’s what it takes to win. And that’s very inspiring, because they’re not just doing it for themselves. And two, that this is a historic moment in the labor movement; since Striketober, we’ve seen a rising tide of labor militancy in the United States that we haven’t seen in generations. The outrageous change of time in the organization of Amazon, in the organization of Starbucks, of young people recognizing that through solidarity and unions, they have a chance to transform their lot – not just their lives, but their society – is very, very real. We were right on the picket line in front of one of the coal mines, watching the scabs move the coal, and a guy who had been working for four years was in tears. He is destroyed by this, but he is committed to fight until the end. Another who had worked for about 37 years said, “I wanted to retire, but I’m in this until we win. He said, “Look, I’m not a radical, but I just want a decent life for my family. I said, “That’s the most radical thing in the world to want.”

Right now, right here, we have over a thousand multi-racial, multi-gender blue-collar workers in the Deep South who have been fighting a Wall Street-backed corporation — an old enemy of yours — for nearly two years. It should be headlines everywhere. Why isn’t it?
That’s a great question, why isn’t it? It’s a modern David versus Goliath story, where you have these multinational corporations, hypermillionaires doing their best to eradicate a working class movement from Alabama. I think one of the most powerful things that was said [tonight] by the head of the union was that everyone on the other side of the bargaining table was millionaires. I was there today when they were putting bags together so the kids wouldn’t starve; it’s on one side, and on the other, the owners of the company who make the decisions on how to deal with the union, have three or four houses in the Hamptons, one or two yachts. It is a heroic struggle of the American working class that everyone should support.

And here’s the thing: United Mine Workers is no joke, man. They have been the sledgehammer of workers’ rights for 100 years, from the West to West Virginia. They won’t be threatened, they won’t be intimidated in court or on picket lines, and they’re very, very inspiring to me. I’m glad I came to play some songs for them.

As Wobbly yourself, it probably feels good to be here with Mother Jones‘ friends.
Yeah, Mother Jones didn’t start until I was 60, I started a little earlier! But as I said, my ancestors were miners. Wherever you knock, I come.

Is it a promise or a threat?
It depends on which side of the picket line you are on.