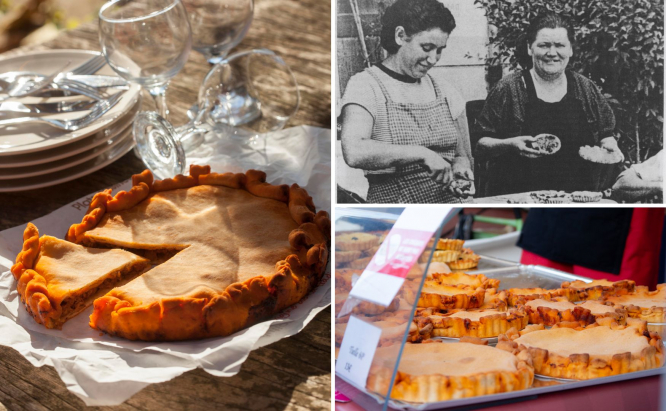 The essential ingredients of tielle are octopus or squid and tomatoes.

“Above all, the tomatoes must be really good and the sauce must simmer for a long time. The reason I opened my store was to carry on the family tradition. I knew the recipes: I grew up with them.

Sophie Cianni, in her boutique in Sète, Hérault, talks with passion about a subject that she masters to perfection: “tielle“, the famous round tart with fluted edges and a beautiful orange color, made of octopus or squid and spicy tomato sauce, which she sells from morning to evening in her shop in the city center, Sophie Cianni & Co.

As in the family tradition, the facade of the store reminds us that it is also an integral part of the tielle: decorated by the architect Guy Falco, it proudly displays the portrait of Sophie’s great-grandmother, Adrienne Virduci.

It’s a fine tribute because, in the 1930s, this enterprising “mamma” managed to transform a humble dish of poor fishermen in Italy into a famous gastronomic specialty still made by her descendants.

Today, they constitute a veritable dynasty, the “tielistsby Sète, which includes Sophie Cianni and her many cousins.

“In Sète, essentially two families make tielles: the Ciannis and the Dassés,” says Sophie who, before opening her shop in 2014, owned a restaurant.

“They are the children of Adrienne’s children. Each in their own way tries to keep my great-grandmother’s original recipe alive.

“Since his time, the recipe has remained unchanged. Of course, like any dish, everyone has their sleight of hand.

Eating a tielle is a ritual

Thanks to this family, over the years, the tielle has become a real institution in this small port on the Languedoc coast where the poet Paul Valéry and the singer-songwriter Georges Brassens were born and buried.

To understand it, just stroll on Sunday morning in the streets of the city with its colorful facades or in the market of Les Halles where the Sètes, installed on the terraces of restaurants and cafes, taste a plate of oysters from Bouzigues before eating ritually a tielle accompanied by a glass of Picpoul, the local dry white wine.

But it is not in Sète, isolated between the Mediterranean to the east and the Etang de Thau to the west, that the origins of the tielle must be sought.

They are found instead in 16th century Italy, more precisely in the small fishing port of Gaeta between Naples and Rome.

In this region, then under Spanish domination, the fishermen and their families, often poor, lived mainly on a kind of pizza made from dough, tomatoes, anchovies and olives.

But they noticed that the Spanish soldiers also made a similar pie, except it was covered in dough.

Undoubtedly derived from Spanish empanadas, it had the advantage of preventing the filling from drying out, an important detail for fishermen and sailors staying several days at sea.

They adopted it little by little, eventually liking it so much that they even created an earthenware mold to bake their dough-covered pizzas.

Later he became the tielle in France, but it took nearly three centuries to get there.

Origins of immigration and poverty

During the second half of the 19th century, many families of Italian fishermen from southern Italy, expelled for economic reasons (the anchovy banks where they fished are running out), settled in Cette, as we spelled it until 1927.

For them, it was ideally located because there, the Mediterranean was full of anchovies.

They first settled in the Quartier Haut, a poor district, protected by the Madonna of the Saint-Louis church.

They lived according to their own customs and spoke Neapolitan.

Food was kept within the Italian community

Above all, they brought with them two culinary specialties: macaronade (a mixture of pasta and beef) and, above all, the “teglia,which they would transform by adapting to local resources.

As these fishermen often struggled to make ends meet, they sold fish but kept small octopuses (called “poufs”) that no one wanted and started using them to make tielle.

At the time, these fishermen rarely went to town and the rest of Sète society, where wealthy shipowners and wine merchants prospered, was completely unaware of this dish of the poor.

But soon, thanks to Adrienne Verduci, the energetic wife of an Italian fisherman, Bruno Verduci, the tielle would gradually emerge from the restricted circle of immigrant families.

“My great-grandparents met at the port. In the 1930s, to sell their fish and shellfish, they had a stall at the Pont de la Civette called “la Reine des Mers” frequented by the high society of Sète”, says Sophie.

“When her husband went to sea, she made him tiellesand one day, to make ends meet, she thought of reselling them.

“She put them in little baskets and went around the markets.”

The success of this “octopus pie” is such that the bread oven that Adrienne used was no longer big enough.

In 1937, Mimi Cianni, Adrienne’s son-in-law and Sophie’s grandfather, traveled to Marseille to buy a larger oven which he installed on the ground floor of their house.

Adrienne’s production then grew and soon the notoriety of the tielle of Sète grown up.

The best tielles are made by hand in Sète

Adrienne died in 1962 at the age of 66, but her many children and grandchildren continued her legacy by gradually opening workshops and stores.

Today the tielleThe fame of has spread far beyond Sète.

Currently not protected by any label, versions often made far from Sète are sold in supermarkets all over France.

“For me, the only positive aspect of the sale in supermarkets is that it has made it possible to make tielle known outside of Sète. But the tiellethe real one is eaten better in Sète,” says Sophie, whose workshop employs half a dozen people.

“What is not reproducible on an industrial scale, to begin with, is the handling of the dough.

“When it’s filled manually, the process changes. Then it’s all about the sauce.

“It must simmer for a long time. I make it myself because the recipe is secret.

“The products are local as far as possible except for the tomatoes, from Italy.

“We prefer Mediterranean octopus and squid, but it depends on the period and the production.

“They are more expensive and rarer than before because the Spaniards are buying a lot.”

For breakfast or aperitif

Sophie’s policy of authenticity obviously pays off because her shop is always crowded.

“We recommend eating them within three days because we don’t use preservatives,” she says.

“Some people buy it for breakfast or an aperitif. It is best to eat them immediately or freeze them. When you reheat them in the oven, they’re basically like when they left our kitchen.

No need for PGI regulations

To protect them from competition and imitations, some “tielists» attempted to obtain the IGP (Protected Geographical Indication) label for the precious pie.

In vain so far: the procedure, at a standstill, was interrupted by the complexity of the regulations.

As for Sophie, mother of two young children who dreams of perpetuating the tradition one day, the approach leaves her skeptical.

“I don’t need an IGP to say that the tielle is from Sète,” she says. “Above all, it must remain what it has always been: a traditional and family product.”

Paul Valéry, himself of Italian origin, liked to call Sète “the unique island”, a city like no other.

Without a doubt, Adrienne’s energetic great-granddaughter and her family contribute to her unique spirit.