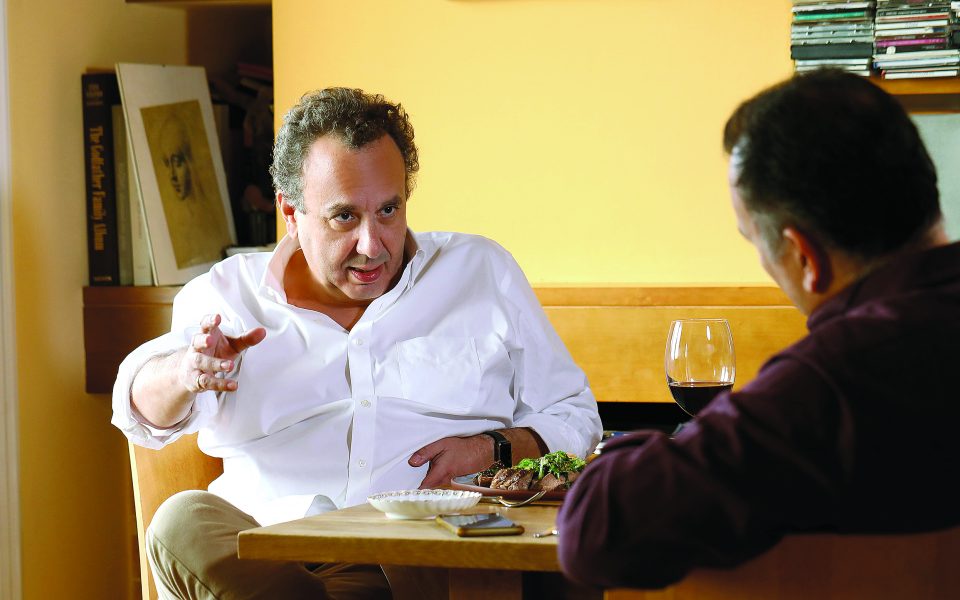 The price ‘came at the right time’

Christos Chomenidis was born in Athens in 1966 and published his first novel, “The Wise Kid”, in 1993. “Niki” was published in 2014 and received the Greek State Prize for Literature before winning the Book Prize. European this year. [Nikos Kokkalias]

Christos Chomenidis received on November 15 the European Book Prize (European Book Prize) for his novel “Niki”. He celebrated the news during a dinner in the Kypseli district of the capital with his wife, actress Gogo Brebou, and one of his theater colleagues. “I picked up Gogo from the theater after the show and we just went out to eat. We had no plans, ”he says. “It came at a price, however; my stomach can’t stand an 11 o’clock dinner.

We meet a few days later at his apartment on the fifth floor overlooking the Court Complex on Evelpidon Street from a hill in Polygono, right on the border with his beloved Kypseli. Brebou runs to make room for photographer Kathimerini Nikos Kokkalias and me. “My house is in chaos,” Chomenidis had warned me by phone earlier when we agreed that it was better to avoid meeting in a restaurant because of the Covid pandemic. “Come on, we’ll order food,” he insisted.

As usual, Chomenidis wears a loose white button-down shirt over pants and walks around the apartment in socks, moving constantly but not erratically. At one point, he pulls out his laptop to order food.

Later friends asked me if Chomenidis was excited about the prize. “Look,” he said to me, “I won it at the right time: not too young to go to my head, nor too old to be written off.

It was a Monday and he had woken up from an afternoon nap to find 11 missed calls from his editor Anna Pataki. “I was afraid someone was dead,” he says. “I wasn’t expecting any news from the prize as I had the impression that the winners would be announced in December. “So what did Anna say?” ” I ask. “’You won’ was all she said. I admit I was a little stunned with joy afterwards and couldn’t eat a bite, which is why I had dinner at 11pm. Not to mention I froze because we sat outside because of Covid.

So what is life like after the award? “When you receive such an honor, it makes you think of your whole life, your mom, your dad. I also thought about my teachers. I had a literature teacher that I loved in third year, Critonas Panygiris. He was a great man who taught us to read modern poetry. And of course, [the prize] reminded me of little Niki, my daughter. This is what it is for me: extension into the future. And also to demystify the stereotypes of Greece among foreigners. I spent some time in Marseille in 2013 when it was the European capital of culture. [The organizers] hosted me in a space to write a novel in three weeks. So, I went to a bookstore in Marseille and came across a French copy of “Red Dyed Hair” by Kostas Mourselas. Can you guess what the French title was? It was ‘The Children of Piraeus’ [The Children of Piraeus]. Let me say this, though: our ancient heritage, our language, even the Zorbas, we are made up of all of these things. I’m not saying we have to get rid of it all, but rather transform it, overlay our own version, include the past in a new version of Greece, instead of a teenage rebellion against the past.

Chomenidis loves Greece; it is evident in his books. As we sit down for a bite to eat – his wife rushes over to bring platters of food – he says thoughtfully: Top of your potential. This is probably what overseas critics saw in ‘Niki’. If you ask me, though, I got there with “The Phoenix”. I see it as my personal bible. This is the book in which I expose myself more than in any other. People also still talk about “The Voice”. What was artistically a failure was “Past Perfect”, in the sense that the result was far from what I had initially expected. “The Phoenix” is my best book, at least in my mind. “

As we enjoy our dinner, rummaging through two bottles of red, I ask him what he would do if writing hadn’t been successful. He answers right away. “I would have become a criminal lawyer, and I would have been very good at it. I am interested in storytelling and practicing law in this. My vocation is not writing, but narration. Ideally, this happens when you are writing books, but it can also happen when you are defending a case. I remember how my mother’s oncologist was a great storyteller: he talked about the disease in a way that made her want to fight it. “

We raise our glasses to celebrate Chomenidis’ award and wish him the same again. “In good health,” he retorts. His uneasiness in talking about his success is obvious. “I like to say that the price is for Greece. It gets me out of the deadlock, spares me the embarrassment. “Yes, but it’s true,” I insisted. “Of course it is,” he said. “After all, I was moved every time I heard that Greek song in ‘The Exorcist’.”

In 1986, at the age of 26 and totally unknown, Chomenidis knocked on the door of the late editor-in-chief of Playboy Greece, Antaios Chrysostomidis. He handed her a short story in which the narrator is not a cancer patient but rather the disease itself. Chrysostomidis was excited about the article but the publication stalled, so Chomenidis set up a camp in front of the magazine’s office near Athens’ first cemetery. “I became friends with his secretary. I waited for him to come out of his office to refresh his memory. The story was finally published in February 1988. He gave me a check for 40,000 drachmas which I photocopied before cashing it. The cover of this issue featured Brigitte Nielsen. Back then, people would rush to Omonia Square late on Saturday nights to buy old-edition magazines and newspapers and read them there. I glanced over their shoulders to see if they were reading my story.

What did the experience teach him? “From the start, I was determined that my first work would not appear in a literary review but in a mainstream magazine. And that I would be paid. I’m a popular writer, you know, of the people. I admire writers like [Nikos] Tsiforos and Bost – amazing artisans who are snubbed by literary circles.

However, his first book, “The Wise Kid”, published in 1993, was warmly received by critics and the general public. “I am grateful to Theofilos Frangopoulos and Dimitris Daskalopoulos. Frangopoulos described the book in the Mesimvrini newspaper as the first postmodern Greek novel. Daskalopoulos wondered if the literary world was watching the new Mr. Karagatsis. Many people still mention this comment today, but forget that there was a question mark at the end. I draw everyone’s attention to this question mark, ”he said before going out to find Niki on the school bus.

By the time we get to know each other and she has a toasted sandwich, night has already fallen. “Stay, don’t go yet,” said Chomenidis.

I take this opportunity to ask him why he never wrote a book on the execution of his grandfather, one of the founding members of the National Liberation Front, EAM, by the Germans. “This story excites me … but my father died too soon, he never spoke of Christos Chomenidis. If there is an afterlife, I want to find him and talk to him. This is the first one. thing that I will do after my death.

How To Avoid The Serious Problems That Payday Loans Can Cause