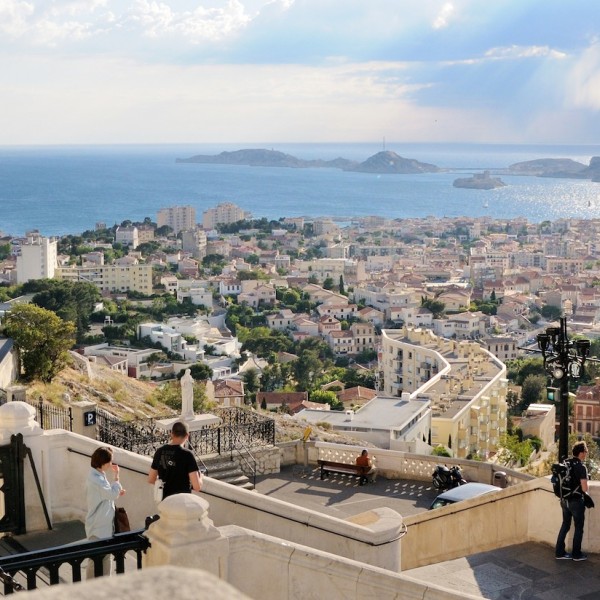 From couscous festivals to colorful graffiti, France‘s oldest city remains as vibrant and diverse as it was over two millennia ago

A young man in a t-shirt and jeans exchanges a few words in Arabic with the middle-aged woman baking flatbreads over an open flame in a small bakery. She cuts one off and gives him a slice. It’s my second day in Marseille and, curious, I stopped to look. I’ve seen little neighborhood places like this in the Middle East, but I didn’t expect to find one in this city in the south of France. The customer turns to me with a welcoming smile. “Sightseeing?” he asks, dropping a coin on the counter. He takes a bite of his bread and walks away down the narrow street without waiting for an answer.

I’m rue Rodolphe Pollak in the Noailles district of Marseille, France’s second (and oldest) city and its main trading port. The maze of streets is a few minutes walk from the Old Port, the tourist heart of the city. The little stalls in Noailles sell vegetables, meat, cleaning products, rattan furniture and, it seems, all the spices of the Middle East. In addition to French, languages ​​spoken on the busy streets include Arabic and African French.

This small-kitchen-sized bakery is run by Yasmina Ayab and her son Mohammed. When I show off a few words of Arabic, Yasmina smiles broadly and invites me to sit with her. She tells me that she is of Algerian origin, came to Marseilles ten years ago with her children, hoping to offer them a better future.

It’s a familiar story here, one that tells the story of Marseille itself. Migration and invasions have shaped this sunny Mediterranean city since Greek merchants landed here 2,600 years ago, built a port and intermingled with local Celts. Later came the Romans, Jews, Visigoths, Burgundians and Franks. Under the Bourbon dynasty in the 17th and 18th centuries, the port was transformed into a shipbuilding centre. In the 20th century came Armenians, West Africans, Comorians and Arabic speakers from North Africa. It all adds up to one of the most ethnically diverse cities in Europe.

“In addition to French, languages ​​spoken on the busy streets include Arabic and African French”

The Noailles district, located a stone’s throw from the main commercial artery of La Canebière, is atmospheric: noisy, not very clean and so colorful. There’s graffiti on the walls, and in a small square that honors Marseille’s Greek roots with a fountain dedicated to Homer, I come across an improvised monument with eight faded portraits. It commemorates the eight people killed in 2018 when two buildings suddenly collapsed for lack of maintenance. It is a neighborhood with a soul.

According to Mustapha, couscous is an integral part of Marseille culture

The restaurant has been in this building since 1921, and Mustapha celebrated the centenary last year with what he describes as “a huge couscous festival”. He makes his signature dish with barley, not the usual wheat, using a recipe that hasn’t changed since the 1920s. He hails from an area in Algeria where his great-grandfather was born. .

“So, after four generations in France, I ask, do you feel French or Algerian? Mustapha does not hesitate: “Algerian”. But then he puts it into perspective. “The Algerian and the French are only nationalities. Me too Marseilles!”

And, he insists, couscous itself is part of Marseille culture. Mustapha was a member of the Algerian delegation that supported the inclusion of couscous on UNESCO’s intangible cultural heritage lists. They succeeded: The dish was added in 2020.

“Algerian and French are only nationalities. So, I’m from Marseille!

To be honest, before traveling here, couscous wasn’t the first meal that came to mind when I thought of Marseille. It was bouillabaisse, the rich soup with olive oil, garlic, fennel and saffron that fishermen’s wives used to make from catches they couldn’t sell to restaurants. . (I was really anticipating it; a few days earlier, when I was on the train to the south of France from my home in Amsterdam, a friend texted me a question. I replied: ” I’m going to think about it over a bowl of bouillabaisse.”) I was planning to taste it with a Pastis from Marseilles—an anise-flavoured aperitif—in a small cafe in the port with locals discussing the world in an incomprehensible dialect.

It was clearly a romantic notion based on previous experiences I had had in remote French villages. I quickly understood that Marseille had nothing to do with these places. For one thing, there are no small cafes in the historic Old Port. It is a huge and impressive marina lined with beautifully restored buildings, including hotels and a soap museum (olive oil soap, accompanied by pastis, is a signature product of Marseille), alongside the 17th century fortifications built under Louis XIV. The restaurants serve bouillabaisse, but when I see the price in one place I am shocked: 69 euros! No bowl of soup should cost that much, even if they made it with fish with golden scales. I check a nearby place: 59 euros.

I give up and find myself two blocks from the old port in a new restaurant, Ourea, very popular with local gourmets. For 28 euros, chef Matthieu Roche serves a three-course lunch that includes one of the most delicious tuna steaks I’ve ever eaten.

More and more young talents are discovering that Marseille is an ideal place to realize their dreams. Some, like Roche, are locals, but there are also a growing number of Parisians moving there every year. In fact, those who leave the capital choose Marseille rather than anywhere else in France. Tired of the hustle and expense of big city life, newcomers – dubbed “bourgeois bohemians” or “bobos” for short – come in search of the more relaxed Mediterranean way of life.

“I worked in finance in London,” says Claire Lombard, the 34-year-old co-owner of Maison des Nines, a small restaurant/boutique/gallery on the edge of Noailles. “I had to leave England because of Brexit, but I didn’t want to go back to Paris. I wanted something different. Here in Marseille, it’s easier to start something new. You don’t have to you don’t need a fortune to live, so in the worst case you can afford to fail.

Lombard created Maison des Nines with two other women. One, Estelle Billet, 29, worked in marketing and retail in Paris and now runs the boutique section of this combined business selling items such as handmade soap, perfume and jewelry. The three friends also sell vintage clothes.

The bobo invasion led to the gradual gentrification of working-class neighborhoods in downtown Marseille. One is Le Panier, a village-like neighborhood just north of the Old Port with shops, restaurants and cultural spaces amid old houses in narrow lanes. While in Noailles the street art is gritty, in Le Panier entire walls display the sophisticated art of various artists, each with specific styles.

My guide here is Corinne Ferrand. She has made her love for her hometown her profession, but I asked her to forget about the tourist hotspots while she shows me around. (After all, Marseille Cathedral and the splendid Notre-Dame-de-la-Garde Basilica, which overlooks the city from a hilltop, are easy enough to spot.) Crossing Le Panier, we pass a petanque court, where the local variant of France’s iconic ball game petanque is played. “The grounds are community-run, but can also be rented out for corporate events,” says Ferrand. (Did I mention creeping gentrification?)

Before leaving the Panier along the quai de la Joliette, where ferries shuttle between Corsica, Algeria and Tunisia, we go from one small street to another, enjoying the relaxed atmosphere that contrasts with the hum of Noailles.

Traveling through these contrasting neighborhoods of Marseille – avoiding, as most locals do, the criminal neighborhoods to the north of the city – I wonder if the mixing of cultures ever poses a problem. That evening, I put the question to Fabien Chabord, who runs a bar on Place Jean-Jaurès in a hipster district on the heights of Noailles. The square’s bars are filled with locals of all ethnicities staring at television screens; the city’s football team, Olympique de Marseille (called OM), plays against Lokomotiv Moscow. OM are in front and the atmosphere is good.

“We see that the different groups are uniting,” says Fabien. “The later it gets, the more tension there is sometimes; it is a difficult city. Laughing, he adds, “I always retire at 2 a.m. Now is the right time to do it.

Later, going back through Noailles to my hotel, I think of the distinct communities living here in the same neighborhoods, together, side by side, but not mixed. There are Tunisian bakeries, Algerian butchers, Armenian grocery stores, Syrian restaurants and vintage bobo clothing shops. Like Mustapha, their owners may also initially feel like a Marseillais.

“You saw that very well,” Adrien Joly told me when I pitched this idea to him the next day. Joly is director at the Museum of European and Mediterranean Civilizations (Mucem). Created in 2013, it is the largest national museum in France outside of Paris. It covers anthropology, history, archeology and art. Joly takes me around the playfully displayed collection that explains the history of Marseille and its enduring focus on the Mediterranean world, rather than the European continent to the north.

It’s splendid, even if the inhabitants have taken time to adapt to this cultural newcomer because, as Joly says, everything that comes from the central government in Paris “is to be wary of. But when they see it, they love it,” he says. “I think Marseille are now proud of that.”

The museum, like so many newcomers to this great old city over the centuries, has had to work to earn its place in people’s hearts. And one day, she too will be truly Marseillais.