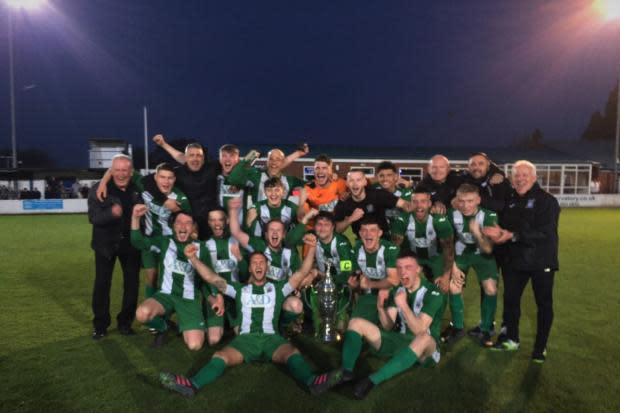 Jordan Pendlebury was the winner of the Tempest match, scoring the game’s only goal six minutes from time, having suffered a sharp spell up front after joining the action as a 56th-minute substitute.

It was no more than Tempest deserved on the night, as they more than faced a Daisy Hill side who play one level above them in the non-league pyramid, and only the prodigals finishing ahead the goal denied the Chew Moor outfit a bigger winning margin.

The victory also continued Tempest manager Ross McNair’s remarkable run in the competition, with this second Hospital Cup triumph as Tempest manager adding to his three wins as a player with Atherton LR.

McNair was understandably delighted with his team’s performance after the game.

“Cup finals are always going to be close matches, although to be honest I don’t think a lot of people liked us,” the Tempest boss said.

“We knew it would be a tough game, but I think we were the better team.

“Daisy was in good shape, but so were we, and I just thought we deserved it that night.

“We created the best chances, but we always knew there would be a threat.

“When you have a player like (Daisy Hill captain) Connor Hughes, he’s going to create chances, he’s a good player.

“But I think we kept him quiet, especially in the second half when we stopped them from getting the ball to him up top and overall with the chances we had we could finish two or three.

“What’s disappointing is with the chances we had, we didn’t hit the target.

“Our keeper made a good save in the second half on a shot that, from where I was, I thought was going to come in, and you need that in a cup final, to have your keeper in top form and he was.

“We made big decisions, benching Aaron Thorpe and Jordan Pendlebury. Jordan just came back from injury and we always knew that putting them on they would still be a threat.

“Jordan is very fast, he offered something different when he came in and obviously scored our goal, and Thorpey worked his socks off and might have a goal himself late, but he skied over the bar .

“But I had 16 guys there, who put in a lot of effort, showed a lot of conviction, and we got our just rewards. It’s been a great end to the season for us.”

In the opposition camp, Daisy Hill manager Leighton Mills paid tribute to Tempest’s display and accepted that they had been the best team of the night.

“Fair play and all credit to them, they came here and did a job on us,” Mills said.

“We knew it wasn’t going to be easy, and we were well prepared, as we have been all season. But we just didn’t show up.

“It’s probably the worst we’ve played all season, although you could say that’s down to Tempest, and they made us play that way.

“They set up well, forced mistakes, and I want to give them all the credit, I don’t want to take anything away from them.

“Their number 10 (Man of the Match winner Matty Davies) gave us endless trouble, he tore us to shreds and we played into their hands.

“They came and played good football, they played to their strengths playing against Davies, who is a very good player and will cause problems for a lot of teams.

“I’m not looking for excuses, it’s a cup final and you should prepare, but we didn’t show up, it’s as simple as that.

“You don’t mind losing so much if your team showed up and played well enough and were unlucky, but we did absolutely nothing to win this game of football.

“It’s a shame to end the season losing a cup final, but at least we got there, which is positive.

“But we let the club down and our group of players won’t want to feel that kind of injury anymore. For now, we’re taking a break and then preparing for next season.”

With beautiful weather and an immaculate playing surface, conditions were perfect for local football’s traditional end-of-season final, and a record attendance for a Hospital Cup final of 815 spectators were treated to a game entertaining that went from start to finish throughout, and could easily have produced more than one goal.

Daisy made the first round and created the game’s first chance in the 7th minute, when Dean Singleton headed wide at the far post from a Tom Brown free kick.

A Connor Hughes shot then missed the target before a Cameron Lewarne header was detained by Tempest keeper Nathan Pennington.

Tempest’s first clear chance came midway through the first half, when a shot from Tom Booth was pushed to safety by goalkeeper Daisy Morgan Newns, and from the resulting corner, Liam Rice headed just above.

The game had settled into a fast pace, and the chances continued to be created at both ends, with Brown from 30 yards well saved by goalkeeper Tempest Pennington, while at the other end, center half Daisy Dean Singleton got a crucial block on a Joel. Center runs just past Kurtis Farlow in the penalty area.

After the break, the game continued to flow from start to finish, but the introduction of Jordan Pendlebury as Tempest’s substitute just before the hour mark refreshed Tempest’s front line, and his first touch was to throw Davies for a shot that was deflected. large.

However, just after the half-time halfway point, Tempest skipper Jordan Coop was perhaps lucky enough to receive only a yellow card when he tripped Bruno Severino as the striker of Daisy turned towards goal with no defender covering in front of him.

With 18 minutes remaining, the Tempest goalkeeper Pennington made the save of the night by knocking down a cracking 25-yarder from right-back Daisy Lewarne.

But as the game moved into the closing stages, Pendlebury’s quick threat increasingly worried the Daisy defence, and after he simply failed to connect with a cross driven low into the box, he finally made the crucial breakthrough with six minutes remaining.

A long free-kick was fired deep into the edge of the penalty area was sent Davies’ way, the first kick from which was parried by Daisy keeper Morgan Newns into Pendlebury’s path, who hid the ball point blank.

Three minutes later, Tempest could have doubled their lead when Davies kicked a low ball across the face of goal to Tempest’s other substitute, Aaron Thorpe, but he somehow screwed the ball over the bar with the goal at his mercy.

In the end, it was academic, and Tempest United saw off safe minutes remaining to claim the trophy for the fourth time in the competition’s history.

The 15 best places to dive in France this summer