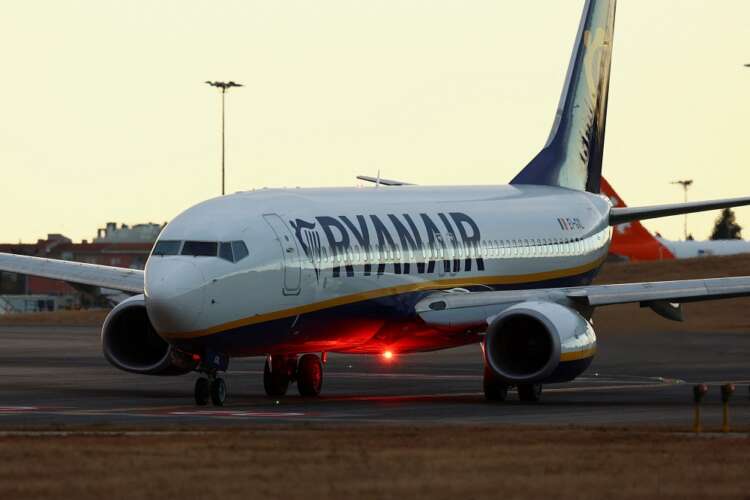 By Catarina Demony and Miguel Pereira

LISBON/BRUSSELS (Reuters) – Some Ryanair cabin crew went on strike in Belgium, Spain and Portugal on Friday over a dispute over pay and working conditions, the latest of a wave of walkouts organized by workers from different sectors in Europe.

Soaring inflation across the continent has led millions of workers to battle the rising cost of living, prompting unions to demand higher pay rises, often backed by strike calls.

Airlines and airport operators have also faced staff shortages to manage passenger flow as travel demand rebounds with the end of most COVID-19 restrictions. Workers at several other airlines, including British Airways, are also planning strikes this summer.

Ryanair cabin crew unions in Belgium, Spain and Portugal have called a three-day strike from Friday. Staff in France and Italy were due out this weekend. Crews in Spain are expected to strike again on June 30 and July 1 and 2.

Workers say the Irish airline is failing to comply with local labor laws covering issues such as the minimum wage and are urging Ryanair bosses to improve working conditions.

“The conditions are terrible,” said Ricardo Penarroias, president of SNPVAC, the union behind the Portugal walkout. “A crew member is not even allowed to take a bottle of water on a flight.”

Ryanair told Reuters last week it had negotiated working arrangements covering 90% of its staff across Europe and did not expect widespread disruption this summer.

Much of the labor unrest has focused on the transport sector as it deals with a return to travel after the pandemic shutdowns.

French unions launched a joint call on Friday for a nationwide strike by railway workers on July 6 and a walkout has also brought Britain’s rail network to a standstill this week.

There are signs the unrest is spreading to other sectors – France’s CGT union is holding a one-day strike on Friday to demand higher wages for oil refinery workers after talks with operator TotalEnergies failed .

With inflation over 8% in the eurozone, a 40-year high of 9.1% in Britain and double digits in some central and eastern European economies, authorities are concerned about the development of a wage-price spiral in which rising wage demands aggravate inflationary pressures.

European Central Bank chief Christine Lagarde has warned that the longer inflation stays high, the more influence it will have on wage negotiations.

The pilot and cabin crew unions of Brussels Airlines, the Belgian subsidiary of Lufthansa, also went on strike on Thursday. Over the three days, Brussels Airlines plans to cancel around 60% of its 533 flights.

Ryanair said in a statement that less than 2% of its 3,000 Friday flights had so far been affected by the strikes, mainly due to what it described as “minor disruptions” in Belgium.

“Ryanair expects more than 98% of its 3,000 daily flights to operate normally on Saturday and Sunday,” a figure that includes disruption due to strikes by cabin crew and French air traffic control operators, and staffing shortages at airports, he said.

Local media in Belgium said 127 flights at Charleroi airport would be cancelled, affecting 21,000 passengers. Ten additional Ryanair flights a day were due to be canceled at Brussels airport.

The USO said five flights from the French city of Marseille and one from Bordeaux to tourist destinations in Spain such as Ibiza and Palma de Mallorca were canceled over the weekend.

In Spain, the government forced the company to operate 73-82% of flights during the strike period to maintain minimum service, forcing most to go to work.

A small group of Ryanair employees used their free time to take part in protests at Valencia and Barcelona airports. A protester held a sign saying: ‘The Spanish government is complicit with Ryanair’.

Commenting on the situation in Spain, Ryanair CEO Eddie Wilson said workers there were demanding a 165% pay rise.

The SNPVAC union said few flights would be canceled from Portuguese airports because the airline put strikers on hold and asked cabin crew from other countries to replace them. Ryanair said SNPVAC only represents 3% of its staff in Portugal.

Outside Lisbon airport, American Michael Rossides, 59, said he booked an EasyJet flight because he thought Ryanair would cancel it, but that ultimately didn’t happen.

“We wasted a lot of time, a few overtime hours and a few hundred dollars,” he said.