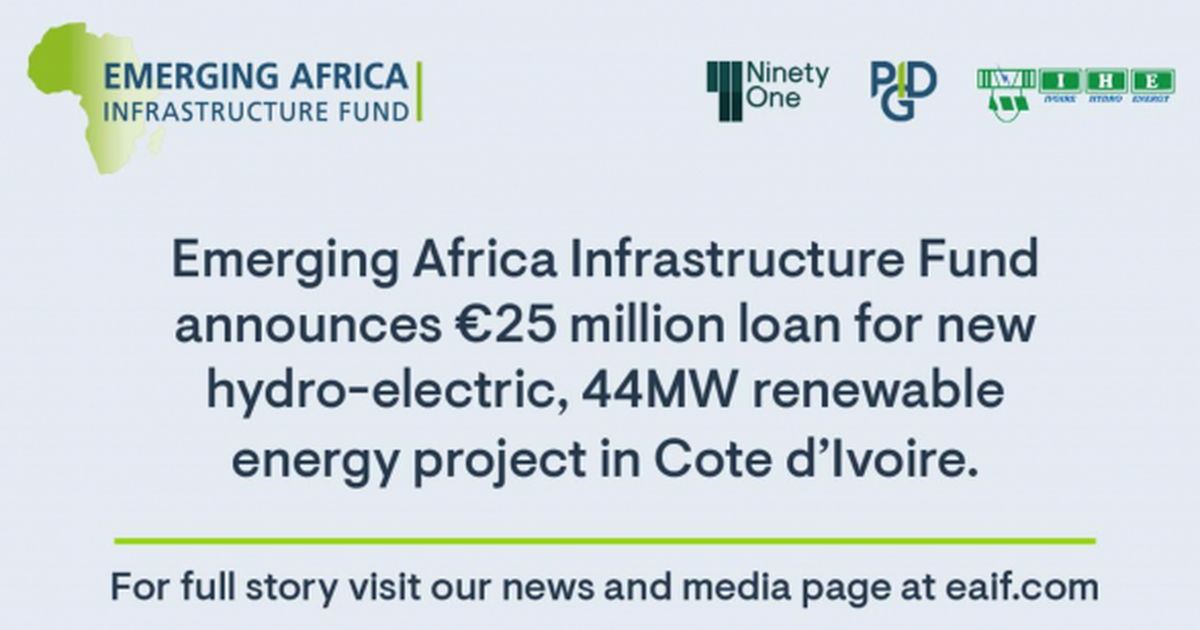 A long-term power purchase contract will see all the energy produced by the Singrobo plant sold to the Ivorian Electricity Company, the operator of CÃ´te d’Ivoire’s national grid. The new factory will be an important strategic economic asset for CÃ´te d’Ivoire. In addition to increasing the country’s generation capacity, the plant improves the flexibility of the system, which means that it can be called upon to meet base demand as well as peak demand.

The African Development Bank (AfDB) has acted as the mandated principal arranger of debt financing and will be a full senior lender. In addition to AfDB and EAIF, other lenders are the German International Development Agency, DEG and the Africa Finance Corporation (AFC). 25% of the cost of the project is financed by the equity of the shareholders of the project, IHE Holding, the Africa Finance Corporation and DIPFA, an international investment platform owned by Denham Capital for energy projects. Neo Themis SARL advises and acts for the shareholders within the framework of the finalization of the development of the project and of the financing agreements.

Electrification rates in CÃ´te d’Ivoire range from around 88% in urban areas to only 31% in rural areas of the country. The economy of CÃ´te d’Ivoire has grown and diversified since the return of political stability in 2011. It has the largest and most diversified economy in the West African Economic and Monetary Union, representing approximately 30% of the total GDP of the monetary union.

The project site is located on the Bandama River, 23 km downstream from the existing Taabo dam and upstream from the confluence of the Nzi River. It is 3.5 km from the village of Singrobo in the province of Taabo and some 148 km by road from the capital of CÃ´te d’Ivoire, Abidjan.

Main infrastructure of the Singrobo factory

Distributed by APO Group on behalf of the Private Infrastructure Development Group (PIDG).

About EAIF: The Emerging Africa Infrastructure Fund ( www.EAIF.com ) provides a variety of debt products to infrastructure projects promoted primarily by private sector companies in Africa and parts of the Levant. The Fund helps create the infrastructure framework essential for sustainable economic stability, business confidence, job creation and poverty reduction. It has so far supported more than 80 completed infrastructure projects in nine sectors in more than 20 African countries. EAIF is part of PIDG.EAIF was created and largely funded by the governments of the United Kingdom, the Netherlands, Switzerland and Sweden. It raises its debt capital from public and private sources, including Allianz, the global insurance and financial services company; Standard Chartered Bank; the African Development Bank, the German development finance institution, KFW, and the FMO, the Dutch development bank. EAIF is operated by Ninety One.

About PIDG: Private Infrastructure Development Group (PIDG) (www.PIDG.org) is a developer and investor of innovative infrastructure projects that mobilizes private investments in sustainable and inclusive infrastructure in Sub-Saharan Africa and South and Southeast Asia. PIDG investments promote socio-economic development as part of a just transition to net zero emissions, fight poverty and contribute to the Sustainable Development Goals (SDGs). PIDG delivers its ambition in accordance with its values â€‹â€‹of opportunity, responsibility, safety, integrity and impact. Since 2002, PIDG has supported 171 infrastructure projects through to financial close, providing approximately 217 million people with access to new or improved infrastructure. PIDG is funded by the governments of the United Kingdom, the Netherlands, Switzerland, Australia, Sweden, Germany and the IFC. PIDG TA can provide technical assistance and capital grants to PIDG companies to meet a range of needs associated with the lifecycle of an infrastructure project. PIDG TA can also provide initial sustainability gap funding grants to support PIDG projects that require concessional funding to make a high development impact project fundable.

About ninety-one: ninety-one ( www.NinetyOne.com ) is one of the largest third-party investors in private equity, credit, private equity and sovereign debt on the African continent. The Emerging Africa Infrastructure Fund (EAIF) is managed by and fully integrated with the Ninety One African investment platform. Ninety One manages the entire process on behalf of EAIF. She markets the Fund, researches projects, evaluates loan applications including due diligence, manages transaction administration and oversees the loan portfolio. Since May 2016, when the management mandate was granted, Ninety One and its EAIF team have concluded more than 20 transactions with a capital value of $ 650 million. The team also led EAIF’s latest fundraiser, raising $ 385 million, including $ 100 million from Allianz Global Investors and $ 50 million from Standard Chartered, a long-time lender of the ‘EAIF.

Ninety One is an independent, active global asset manager listed on the London and Johannesburg stock exchanges. Founded in South Africa in 1991, under the name Investec Asset Management, the company has been a pioneer in emerging markets in Africa. In 2020, almost three decades of organic growth later, the company separated from the Investec Group and became Ninety One. Today, Ninety One offers distinct and active equity, fixed income, multi-asset and alternative investment strategies to institutions, advisers and individual investors around the world.