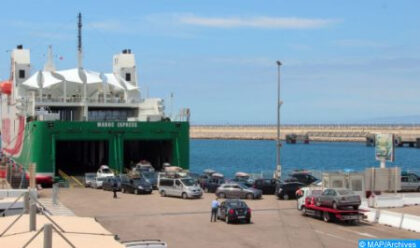 Thus, the national company Royal Air Maroc (RAM) has announced the establishment of an “exceptional” and “historic” device to facilitate the travel of Moroccan expatriates this summer, strengthening its flight program, offering some 3 million seats. at prices very accessible to members. of the Moroccan community living abroad. The exceptional rates were set according to the host country and the number of family members.

In the process, the Direction de la Marine Merchande, has stepped up its efforts with transport companies operating on shipping lines with Europe to increase the capacity of the offer, diversify the ports of embarkation and practice reasonable prices for The passengers.

To this end, the reference prices for return tickets, with a car, have been lowered to 995 euros for a family of 4 for long-haul journeys and 450 euros for medium-haul journeys.

In the same context, discussions are underway with the Portuguese authorities with the aim of making the port of Portimao in Portugal a port of embarkation, by opening new shipping lines from this port to the port of Tanger Med.

Meanwhile, the Spanish ports of Algeciras, Tarifa and Malaga have been excluded from Operation Marhaba 2021.

In addition, the Merchant Marine Directorate will continue its contacts with shipping companies to encourage them to increase the number of rotations and thus increase transit capacity, to meet demand during this period, taking into account the technical and procedural provisions. ports and ships

On Sunday, King Mohammed VI urged all transport companies and all other stakeholders on the ground to facilitate the return of the Moroccan diaspora to their homes for the summer holidays by offering affordable travel costs.

The King also urged all tourist operators, both in the field of transport and hotels, to take the necessary measures to welcome members of the Moroccan community residing abroad in the best conditions and at the best prices.

The Sovereign also instructed the Mohammed V Foundation for Solidarity as well as the Moroccan embassies and consulates abroad to mobilize to assist the Moroccan diaspora returning to the country for the summer holidays and to provide them with a system of support. ” special support on board ships making the return crossing. home.

Civil society activists and members of the Moroccan diaspora welcomed the king’s instructions to facilitate their return to the country, stressing the high importance of the royal noble gesture on their moral, financial and social situation.

The North Africa Post news bureau is made up of journalists and editors, who are constantly working to provide new and accurate stories to NAP readers.