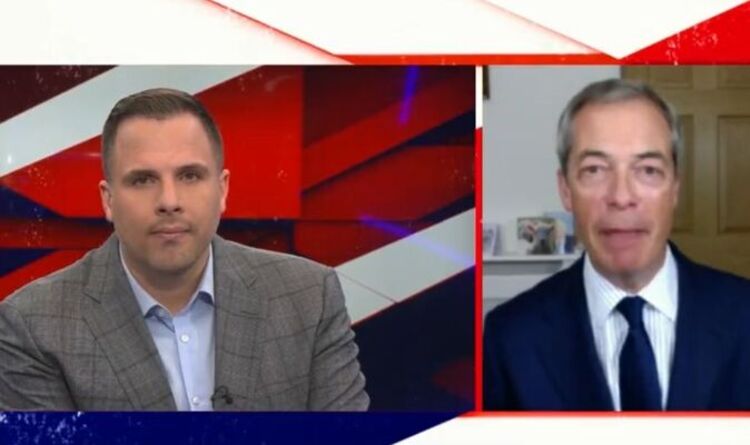 French President Emmanuel Macron and Ms Le Pen will face off in the final rounds of voting on April 24 in what is expected to be a very tight race for the presidency. On Sunday evening, the results of the first round of voting concluded that the centrist candidate, Mr Macron, won 27.9% of the vote in his fight for a second term, while Mrs Le Pen won 23.2%.

The two candidates will now fight for the supporters of far-left politician Jean-Luc Melenchon, who came in behind Ms. Le Pen with 22% of the vote.

Mr Melenchon told his constituents not to vote for Ms Le Pen, but did not specifically support Mr Macron.

Speaking to Dan Wootton on GB News on Tuesday, Nigel Farage discussed the capabilities of the far-right candidate.

He said: “What Marine is good at is that she is good at talking about the concerns of ordinary French people, the massive demographic transformation taking place in France, the fact that there are suburbs of Paris and Marseilles and elsewhere that are now unrecognizable.

However, he added: “His weak point was the economy; its economy is actually quite hard on the left.

“For me, a statist who thinks people should all retire at 60, I don’t think it works economically in the medium to long term, but it could be attractive for the French.”

Mr Farage warned the European Union that Mrs Le Pen would be bad news for the bloc if she won the second round at the end of the month.

The leader of the National Rally party has a mixed stance on the EU, as her party recently dropped a proposal to leave the union but remains Eurosceptic.

READ MORE: Cornwall and Devon holiday chaos as hospitality ‘on its knees’

Mr Farage concluded: “Ultimately it is globalist Macron versus eurosceptic, patriotic, nationalist Marine Le Pen and ultimately that is the choice the French face.

Mr Macron warned his supporters that nothing had yet been decided and that “the coming fortnight is decisive for our country and for Europe”.