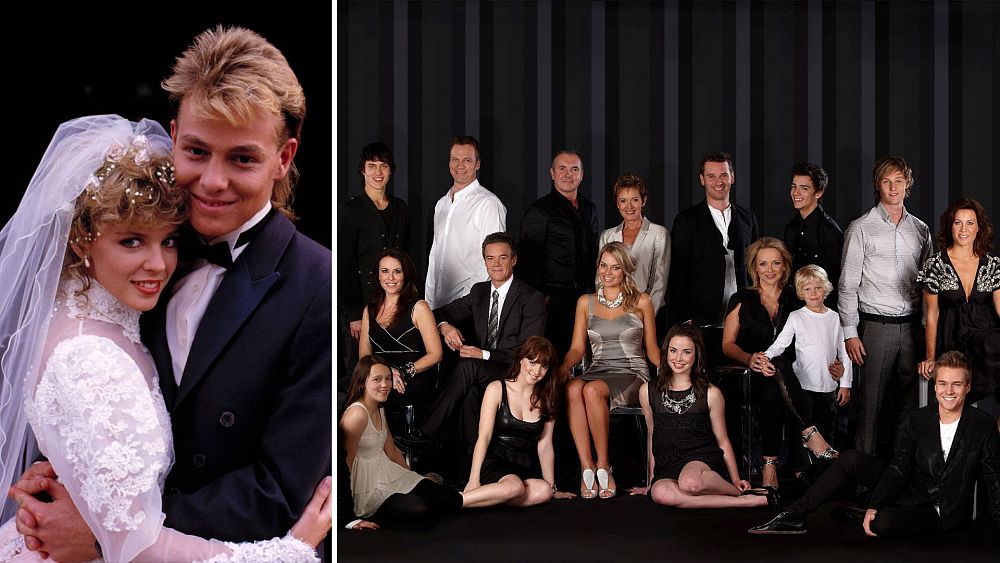 On Thursday, July 28, 2022, the star-studded finale of Australian soap opera ‘Neighbours’, which ran for 37 years, aired.

Margot Robbie, Kylie Minogue, Guy Pearce, Jason Donovan, Natalie Imbruglia and Holly Valance were among the celebs who returned to Ramsay Street fiction to appear in the Melbourne-based drama send-off that helped launch their acting careers and music.

Some of the best-known actors who have appeared on ‘Neighbours’ since its 1985 debut – but weren’t part of the 90-minute finale – include Oscar winner Russell Crowe and the Hemsworth brothers, Chris, Luke and Liam.

Throughout its run in Australia, “Neighbours” was shown as a 22-minute weekday episode and depicted the lives of residents of Erinsborough, a fictional suburb of Melbourne.

But who are his soap opera counterparts in Europe? We’ll take a look.

It takes place in the fictional town of Weatherfield, based on the real town center of Salford, England, and focuses on the everyday life of working-class people.

The soap opera is so ingrained in British culture that it was even paid homage to in Queen’s 1984 ‘I Want to Break Free’ music video, where all the band members dressed up as women in a suburban house. .

“Lindenstraße” is not only considered Germany’s longest-running soap opera; it is also the first.

Largely inspired by the UK’s “Coronation Street”, the show is set in Lindenstraße, a fictional street in a suburb of Munich, and follows the lives of a wide range of ordinary people and families.

The triumphs and tragedies of everyday life are explored in the show, including infidelity, unemployment, falling in love, drug addiction, politics, religion, and the pitfalls of adolescence.

The creators of “Lindenstraße” have never been afraid to tackle controversial or sensitive topics. For example, the daughter of one of the central families once suffered from bulimia; another son was born with Down syndrome.

Italy – Un posto al sole (A place in the sun)

“Un posto al sole” (“A Place in the Sun”) takes place in a fictional building called Palazzo Palladini, located facing the sea in the beautiful Posillipo district of Naples.

With a large ensemble cast, the show explores social issues such as unemployment, violence, discrimination, marginalization and integration.

To the surprise of fans, the show’s 6000th episode special (airing July 29, 2022) was narrated by Bricca, the dog of one of the show’s main characters, Giulia Poggi.

The series follows the lives of the inhabitants of “Le Mistral”, a fictional district of the Mediterranean port city of Marseille.

Similar to the soap operas mentioned earlier in this list, “Plus belle la vie” was groundbreaking in its exploration of underrepresented issues and themes on television, such as same-sex marriage and transgenderism.

In 2013, it featured The Wedding of Thomas and Gabriel, the first marriage between two men ever shown in a French television drama.

However, after 18 years on the air, the show’s creators have announced the end of the series, which will take place on November 18, 2022, following “a substantial change in viewing habits”.

“Familie” is Belgium’s longest-running soap opera and focuses on the life of the Van den Bossche family, who run an electronics business.

The Flemish series first aired on December 30, 1991 and continues to air to this day. In total, more than 7300 episodes have been broadcast.

The show sparked controversy last year after it was discovered that an animal rights group had paid for a pro-vegan storyline to be featured on the show.

One of the show’s characters, Zjef, who runs a food bar, presents an array of vegan sandwiches that sparks a discussion about the health benefits of veganism.

The episode’s closing credits revealed the involvement of animal rights group GAIA in the plot.

As a result, Belgian TV channel VTM was charged around €26,000 by broadcast regulators.