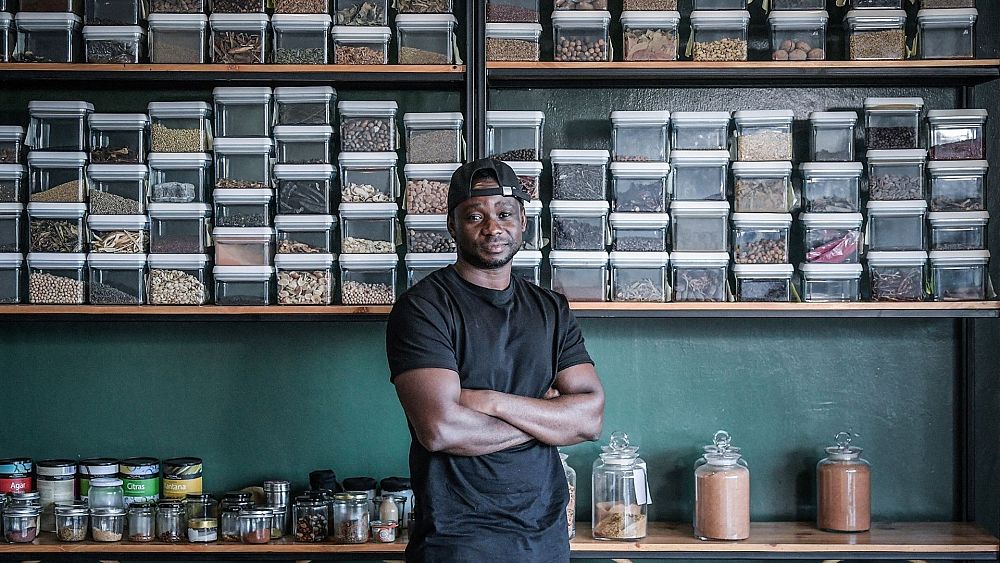 Not a single Michelin-starred restaurant specializing in African cuisine can be found on this continent.

But that could soon change thanks to the profession of chefs like Daniel Malonga.

A rising star in the culinary world, Malonga hopes to draw more attention to the diversity of the food supply across Africa.

From his travels in 38 African countries, the 30-year-old chef brings back techniques, such as smoking and fermentation, but also traditional spices and condiments.

Small peppers from Côte d’Ivoire, pèbè nuts from Cameroon and other ingredients such as mbinzo caterpillars from Congo occupy an entire wall of his restaurant.

The chef, who traveled further, through Germany and France, relies on these experiences to create its ‘Afro-fusion’ cuisine.

“I travel to different countries, I learn from grandmothers then I take these old recipes and I bring them to my laboratory here and I try, with my chefs, to bring a touch of modernity”, explains- he does.

Dieuveil Malonga was born near Brazzaville, in the Republic of Congo, where, despite the death of his parents, he lived “a very happy childhood within a very united community”, underlines his website.

At 13, he was welcomed into Germany into a pastor’s family and joined a renowned cooking school in Münster.

Graduated and noticed during competitions, he worked in several german restaurants, including the three-Michelin-starred Aqua in Wolfsburg, then in France, at the Intercontinental Hotel in Marseille.

But something seemed “missing” for Malonga, so he left Europe to travel all over Africa.

In 2020, he opened his restaurant ‘Meza Malonga’, located in the capital of Rwanda, Kigali.

The ‘Malonga table’ attracts a clientele of affluent locals, expatriates and tourists – for a total bill of around 130 euros.

Passionate about products, the chef enjoys walking the alleys of the Nyamata farm, an hour from Kigali, where he is full of aromatic herbs and edible flowers.

The chef wants to “create something big” with his next business

“Something is happening in Africa now, and people are interested in knowing more about African cuisine,” says Malonga.

By 2023, the chef wants to go “higher, create something big” by opening a new restaurant in the very rural region of Musanza, in northern Rwanda, at the foot of the Virunga volcanoes and their famous gorillas.

More upscale, more expensive, the second Meza Malonga will be both “an experience” and a “village of culinary innovation”, where most of the food will be produced on site, but also a training center.

Malonga believes that African cuisine is often reduced by foreigners to a minimal number of dishes such as rice, maffe and yassa.

“There is immense diversity. Take the example of Nigeria (…) in a day you can eat more than 20” types of food.