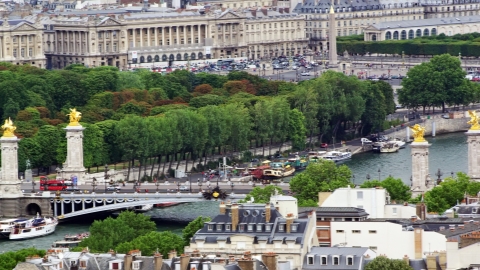 The Olympics should be a centerpiece of Macron’s second term, recently re-elected, projecting the image of a France comfortable in its modern identity but open to the world.

But two years from the opening ceremony on July 26, 2024, concerns are growing not only over costs but also over security preparations.

France’s reputation as a reliable host of sporting events has been shaken by the chaos that marred the Champions League final between Liverpool and Real Madrid in Paris on May 28, which critics blamed on a muscular font.

Of particular concern is the ambitious vision – in typical Macron flourish – of an opening ceremony that will not take place as usual in the athletics stadium but like a flotilla on the Seine.

The meeting at the Elysée brought together key ministers such as Interior Minister Gérald Darmanin and Sports Minister Amélie Oudéa-Castera as well as the head of the Paris organizing committee, the three-time Olympic canoe slalom champion Tony Estanguet.

Macron will also meet after the meeting with the president of the International Olympic Committee, Thomas Bach, the Elysee said.

It is an opportunity for ministers “to see where there are weaknesses”, said a French presidential official who requested anonymity.

“The idea is to be aware of the schedule and the next steps.”

Not invited were the mayor of Paris Anne Hidalgo and the boss of the Paris region Valérie Pécresse, both unsuccessful candidates in the presidential election in April and who published a joint statement on Friday complaining of being excluded.

The Olympic Organizing Committee COJO has a budget of four billion euros (4.1 billion US dollars), as does its partner organization SOLIDEO, which is responsible for building the peripheral infrastructure.

But rising inflation means saving money and so far not enough sponsors have been found to fill the gaps.

“Everything is very tight on the budget,” said a source familiar with the matter who requested anonymity, saying the scale of the challenge would be clear in the fall.

Security is a particular headache, especially since the vision of the Games is to organize many events in the center of Paris. This includes events around the Eiffel Tower and the central Place de la Concorde, which is close to the presidential Elysée Palace.

In addition to the French security forces, more than 20,000 private security agents must be hired to ensure the running of the Games.

France’s highest audit body, the Cour des comptes, warned in a report that it is “imperative” to speed up preparations to deal with the “considerable” security challenge.

“A more precise definition of security needs is becoming urgent,” says the report, the first version of a study to be published later this year. It was first revealed by the weekly Canard Enchaine then seen by AFP.

The report also suggests cutting back on the opening ceremony, which is expected to have an armada of 200 boats and some 600,000 spectators.

The daily Le Monde said the prospect of the opening ceremony on the river – with spectators crammed on the banks of the Seine – was giving organizers “cold sweats”.

Some 10 million spectators are expected in total, but plans to improve the sometimes dilapidated transport infrastructure of Paris, in particular with two new metro lines, will not be ready at the start of the Games.

The Games will represent a unique challenge. The flagship athletics and swimming events are to be held in Seine-Saint-Denis north of Paris, one of France’s poorest areas, and a cluster of events in the center of the capital.