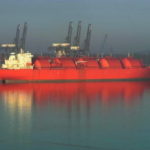 LNG – A fuel in transition

2021 has been a year of dramatic progress and growth for LNG (liquefied natural gas) as a marine fuel and its path to
decarbonization. Orders for LNG-powered vessels reached record levels while bunker infrastructure continued to expand at a rapid pace.

Significant progress has been made in increasing the production of bioLNG and renewable synthetic LNG. LNG carriers will retain their value as shipping moves towards a net zero future. LNG is indeed a fuel in transition and a leader in the transition to a cleaner future for the deep sea maritime industry.

“Doing nothing today is wrong. Don’t let the good go to waste in the search for the best.
Svein Steimler, President and CEO, NYK Group Europe

Since our last review in January 2021, the volume of LNG-fueled newbuild orders has accelerated significantly to approach 30% of gross tonnage ordered according to Clarksons. For some segments, such as the ultra-large container ships that underpin the global trading system, more than 50% of the order book is LNG-fueled or LNG-ready.

It should be noted that orders for LNG-fueled container liners have increased fivefold since January 2020. It is expected that more than 90% of new pure car and truck carriers (PCTC) entering the market in the coming years will be dual fuel LNG (DF). Tankers and bulk carriers are also following suit, with increases of seven and two times, respectively, over the 18-month period. Gibson pointed out that nearly a quarter of tanker orders are LNG fueled: twenty very large crude carriers, 41 Aframax/Long Range product tankers and two Suezmax tankers plus forty LNG-ready tankers.

2021 marked an exponential growth in orders for LNG-powered ocean-going vessels, with more than ten operators announcing multi-vessel orders over the year:

Assets that come online today will be part of a net-zero shipping future, as they will be able to run on bioLNG and renewable synthetic LNG without costly modification.

The rapidly growing order book for LNG-powered ships demonstrates that a growing number of shipowners and ship operators understand that the path for LNG is clear and well-defined.

• CMA CGM welcomed nine new container ships to its fleet in 20211 and ordered ten more from KSOE.2 Zim chartered another ten,3 while Hapag Lloyd ordered six container ships.4 MSC joined these liner companies investing in LNG by announcing the switch to LNG. for new builds on order in China.5
• Mitsui OSK Lines, NYK Line, K Line6 and Langh Ship7 have all announced orders for LNG-powered bulk carriers.
• UECC has launched three additional car carriers, also equipped with combined LNG-battery propulsion,8 and Volkswagen will put four new LNG-powered car carriers into service in 2023.9 ​​K Line10 and NYK have ordered eight and twelve PCTCs respectively dual fuel. NYK has announced that its fleet of LNG-fueled PCTCs will approach 40 vessels by the end of this decade.11 While placing an order for four LNG-fueled PCTCs,

MOL has announced that it wants a fleet of 90 LNG-powered vessels by 2030.12 Wallenius has also ordered two LNG-powered car carriers with options for four more in addition to the two PCTC LNG vessels ordered by Wallenius SOL, its joint venture with Swedish Orient. Line.13

• In the passenger world, Brittany Ferries14 and TT Line15 have both ordered two LNG-powered ferries, while P&O Cruises’ Iona has made its first LNG-powered voyage,16 and AIDA and Costa Cruises have taken delivery of their second ships powered by LNG, AIDAcosma and Costa Toscana, 17 respectively.

“LNG is a proven, compliant and immediately viable solution to reducing greenhouse gas emissions from transportation.
Flexibility is the name of the game and that’s what we get when choosing LNG.
Glenn Edvardsen, CEO, UECC

Given the exponential growth of new LNG builds, DNV expects fuel demand to triple to over 3.5 million tonnes by 2024. To meet this demand, the construction of LNG bunker infrastructure continued in 2021.

According to DNV, there are now 33 LNG bunker vessels (BV) in service and another 42 on order or under discussion. By the end of 2022, the BVs will be operational in Northern Europe, the Mediterranean, the United States, Canada, South Korea, Japan, Malaysia, China, Singapore, Brazil and South Africa . Other regions such as Australia are also investing in LNG bunkering.

LNG bunkering is available at 141 ports worldwide. Clarkson expects that number to grow to 170 ports in 2022.

TotalEnergies predicts that LNG bunkering will account for 10% of global bunkering by the end of the decade.

• In 2021, Singapore bunkered its first LNG-powered container ship, when the FuelLNG Bellina provided ship-to-ship bunkering for the CMA CGM Scandola.18 Singapore MPA also awarded its third LNG bunker license to Total Marine Fuels.19
•TotalEnergies has also announced LNG bunkering projects in Oman.20
• Sumitomo Corporation has announced that it will partner with Turkish pipeline operator BOTAŞ and Arkas Bunkering to bring an LNG bunker hub to Turkey.21
• Stabilis Solutions Inc has signed memorandums of understanding to bring LNG as marine fuel to the Port of Galveston, Galveston Wharves,22 Cameron Parish Port,23 Port Isabel24 as well as the Port of Corpus Christi.25
•Puget LNG opened in the US Pacific Northwest.26
• Shell supplied LNG for the tanker AET Pacific Ruby in Port Canaveral.27
• The class company, RINA, has been awarded a framework contract by the European Maritime Safety Agency which will help develop LNG bunkering and storage in ports in the Mediterranean, Black Sea and Caspian Sea .28
•ENN Natural Gass won China’s first LNG bunkering license to become a supplier to Zoushan Port.29

On the front of the supply ship:
•Shell continues to charter new bunker vessels, including a 20,000m new build from Avenir.30
•TotalEnergies conducted sea trials for its LNG bunker vessel in Marseille.31
•Kanfer Shipping, based in Norway, has ordered two LNG bunker vessels.32
•Societe Generale facilitated Pan Ocean financing for one of the world’s first purpose-built LNG bunker vessels.33
• Seaspan has ordered a bunker vessel for the US West Coast34 and Fratelli Cosulich for operations in the Mediterranean.35
•The largest articulated tug and barge (ATB) ever built in the United States, the Clean Canaveral was delivered to Polaris New Energy by Fincantieri Bay Ship Building. A second ATB of similar size has already been contracted between the two parties.36
•Shell entered into an agreement with Crowley Maritime Crop to develop an LNG bunker vessel along the US East Coast.37

All LNG bunkering infrastructure as well as bulk LNG and natural gas support systems can transport, store and deliver bioLNG and renewable synthetic LNG without any modification or additional investment.
Source: SEA LNG

3 cybersecurity imperatives for financial firms in 2022