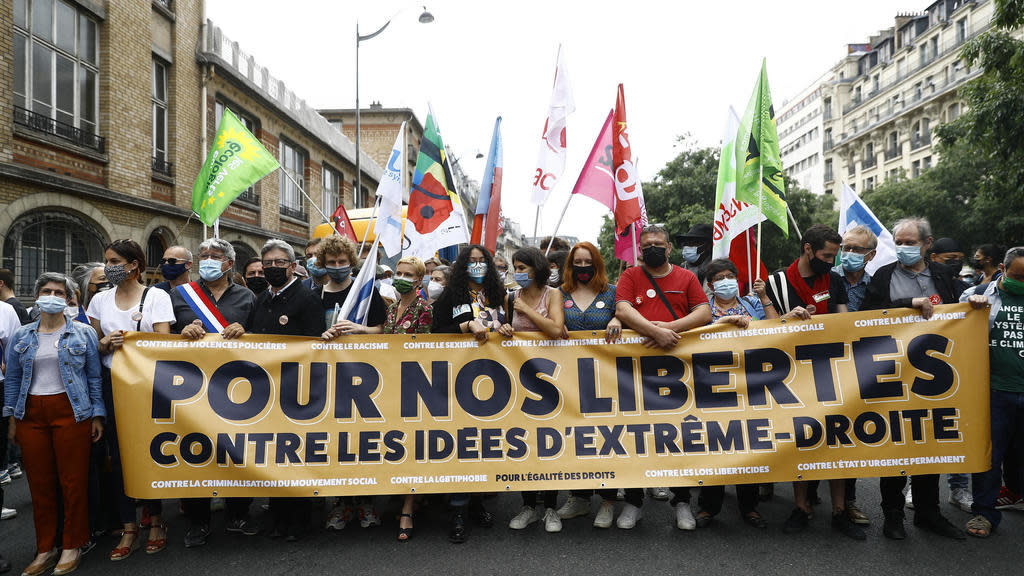 The parties of the left of French politics united for “marches for freedom” in dozens of cities in France to rally to the ideology of the extreme right.

Politicians, unions, environmental groups, human rights NGOs and others have denounced the far-right hatred which they say influences French law.

Organizers say they are particularly angry at how the far-right immigration and security debate has saturated the political agenda.

They also oppose the “climate of racism and intolerance” which, according to them, corrupts French society.

Thousands of people joined over 140 events in cities like Marseille, Rennes, Strasbourg, Nantes and Bordeaux.

At the Parisian march, the leader of the far left party France Unbowed, Jean-Luc MÃ©lenchon, reacted with humor after being hit by a flour bomb at the Place de Clichy.

“White suits me well,” he told reporters on the spot. â€œIt’s okay, it was just flour. I am alive, everything is fine.

A man identified as the flour bomber told BFMTV he had not intentionally targeted MÃ©lenchon, although members of France Unbowed said they were upset he had not been arrested.

Despite the demonstration of unity on Saturday, there was no common slogan during the marches, which French media described as “disorganized”.

Political divisions have continued to haunt the French left as the country enters campaign mode ahead of next year’s presidential elections.

France Unbowed, Europe Ecologie – The Greens and the French Communist Party are continuing their campaigns, while the Socialist Party has yet to decide whether it will present its own candidate.