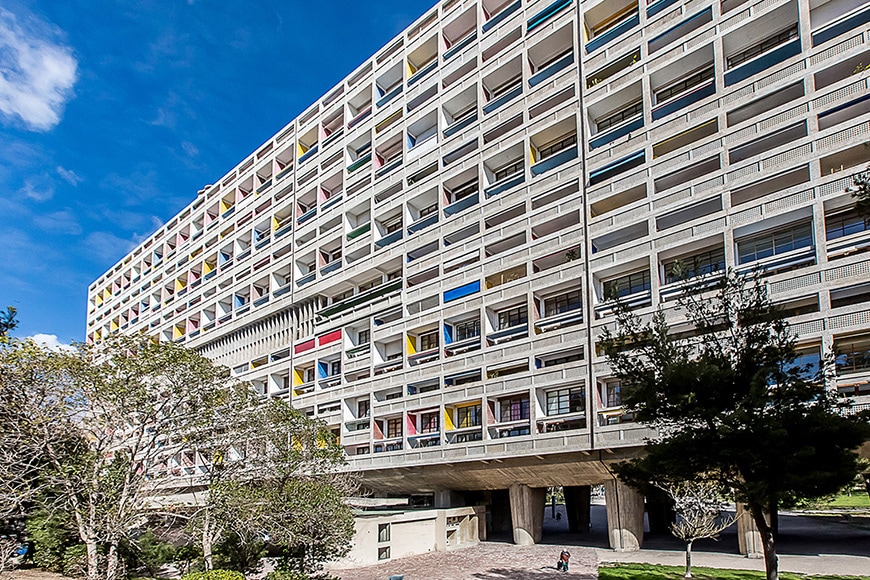 One of the most famous architectural projects of Le Corbusier and a UNESCO World Heritage Site, the Unité d’Habitation in Marseilles, also known as Radiant Cityis a 1952 residential building partially open to the public.

Story
Designed by Le Corbusier with the Portuguese architect and artist Nadir Afonso in the 1940s, the Unite d’Habitation in Marseille was the first of a series of five similar buildings built in France and Germany between 1952 and 1965.
The design of Unite The building in Marseilles was commissioned from Le Corbusier by the French government (represented by the Minister of Reconstruction, Mr. Raoul Dautry) shortly after the end of the Second World War with a view to creating a model for a new generation of social housing to be built throughout France.
To cope with the strict technical and financial constraints of the project, Le Corbusier imagined a single large building that could accommodate up to 1,600 people. In the same period, the Swiss architect also designed two large housing estates for 20,000 people – one for La Rochelle, in the Charente-Maritime department, and the other for St-Dié, in the department des Vosges – each consisting of eight “Units” buildings similar to the one in Marseilles, none of which was completed. Nevertheless, as mentioned above, four unique housing units were built in Nantes, Briey, Firminy and Berlin between 1955 and 1965.

The building was raised on massive concrete pillars in order to leave the ground floor as free and open as possible; photo by Artur Salisz.

Although the Unity conception is rooted in Le Corbusier’s various experimental projects of the 1920s and 1930s, such as his Buildings Villasthe building stands out clearly aesthetically from the previous achievements of the Franco-Swiss architect to introduce a more organic and massive style, characterized by the extensive use of raw concrete (Gross cement in French), which would eventually give rise to the so-called brutalist architectural style and would anticipate some of Le Corbusier’s later works, such as the Sainte Marie de La Tourette convent, the Notre Dame du Haut chapel – both in France – and the series of buildings the architect designed in Chandigarh, in the northern India.

Architecture
Le Corbusier’s idea was to create a “vertical garden city”, namely a huge 18-storey building including 337 apartments of 8 different types (named from A to H) in 23 variants. Based on a modular unit of 15.5 m² / 167 ft² and a gross floor area ranging from 15.5 m² (one module) to 203 m² / 2,185 ft², the apartments can accommodate from 1 to 10 people; the most common type is the E one, a split-level apartment for 4 people with an area of ​​98 square meters / 1,055 square feet. Each apartment has been designed as a “living machine” (living machine) equipped with then state-of-the-art technical facilities “to free women from household chores” (to free the woman from domestic constraints), whose dimensions were based on those of Le Corbusier modulator anthropometric scale.
On each floor, a 120 meter long corridor gives access to the apartments and also serves as a socializing/gathering space for the residents.
Le Corbusier saw the Unite d’Habitation as the home of a large community of people rather than just a residential building, so he designed various communal facilities there, including gardens, shops, a restaurant, a library, a doctor’s office, a pharmacy, a kindergarten and a roof terrace with playgrounds, a swimming pool and a small open-air theatre.

The Marseille Housing Unit includes 8 types of apartments available in 23 variants, all based on a 15.5 m² module, which can accommodate from 1 to 10 people. Image reproduced with the kind authorization of the Association of Residents of UH Le Corbusier Marseille.

The way the two-level apartments stack together is very ingenious; one level of each residential unit occupies the entire section of the building while the other level occupies just under half a section, the remaining space accommodates a common hallway.
In all hallways, the apartments on the left side and the right side are different. For example, in those on one side, people enter at the living room level and then go up to the sleeping area by an internal staircase, while in the accommodations on the other side, people enter at the dining room level then descend to a lower level which houses the living room and all the bedrooms.
In this way, Le Corbusier was able to create modular apartments of different types keeping the same structural module throughout the building and reducing the number of corridors.
The price to pay was rather cramped interior spaces, at least for today’s standards, and, at times, a somewhat heavy interior distribution.
This arrangement is a variant of that of the crossing apartmenta type of apartment very common in France and Switzerland.

Home
During its construction, the Housing Unit received a mixed reception; on the one hand, it was praised for its forward-looking design and architectural inventiveness, on the other hand, it was considered crude and alienating, mainly due to its enormous size (the nickname The House of Fada, meaning “The house of the madman” in the local dialect, was coined by Le Corbusier’s detractors to mock the building by claiming that anyone who lived in it would go mad). Subsequently, it was considered by many to be the prototype for a whole generation of ghetto-like public housing complexes characterized by poor living standards and poor architectural features. In my opinion, this harsh judgment is largely wrong. L’Unité à Marseilles proved to be quite a successful design indeed. As Le Corbusier envisioned, immediately after the building was completed and populated in 1952, its inhabitants began to form a community; in 1953, they also founded a popular association of inhabitants, which still exists today. At present, most residents say they are satisfied with the apartments and the collective facilities in the building and, despite its budgetary construction more than seventy years ago in a rather peripheral district, the Unit is still very popular with Marseillais and the average price per square meter of apartments exceeds €4,000 ($4,600).

The interior of a 140 m² “type G” apartment in 2018; photos published with the kind permission of Architecture de Collection.

Visit of the Housing Unit
The Marseille Housing Unit is located in the Saint Anne Neighborhood of the 8th arrondissement of the city, it is accessible by the RER lines M1 and M2, stop “Castellane”, or by bus B1, stop “Le Corbusier”.
Although the building is still permanently inhabited, parts of it are open to the public. Visits are managed by the Association of Residents of UH Le Corbusier Marseille, and give access to various common areas -including the hall, the passageways of the 3rd and 4th levels with the various shops opening above, the library, the winter garden, and the roof terrace- and two apartments, one of which has a the original furniture designed by Le Corbusier while the other hosts temporary exhibitions of art and design. The building also houses the contemporary art gallery MAMO on the roof terrace, a hotel and the restaurant “Le Ventre de l’Architecte”.

Marseille Housing Unit, interior views of one of the apartments open to the public during the “ECAL Appartement 50” exhibition, 2015; photos Michel Bonvin courtesy of the Ecole cantonale d’art de Lausanne.

Two views of the roof terrace, photos by Guzmán Lozano and Michel Bonvin.

3 cybersecurity imperatives for financial firms in 2022