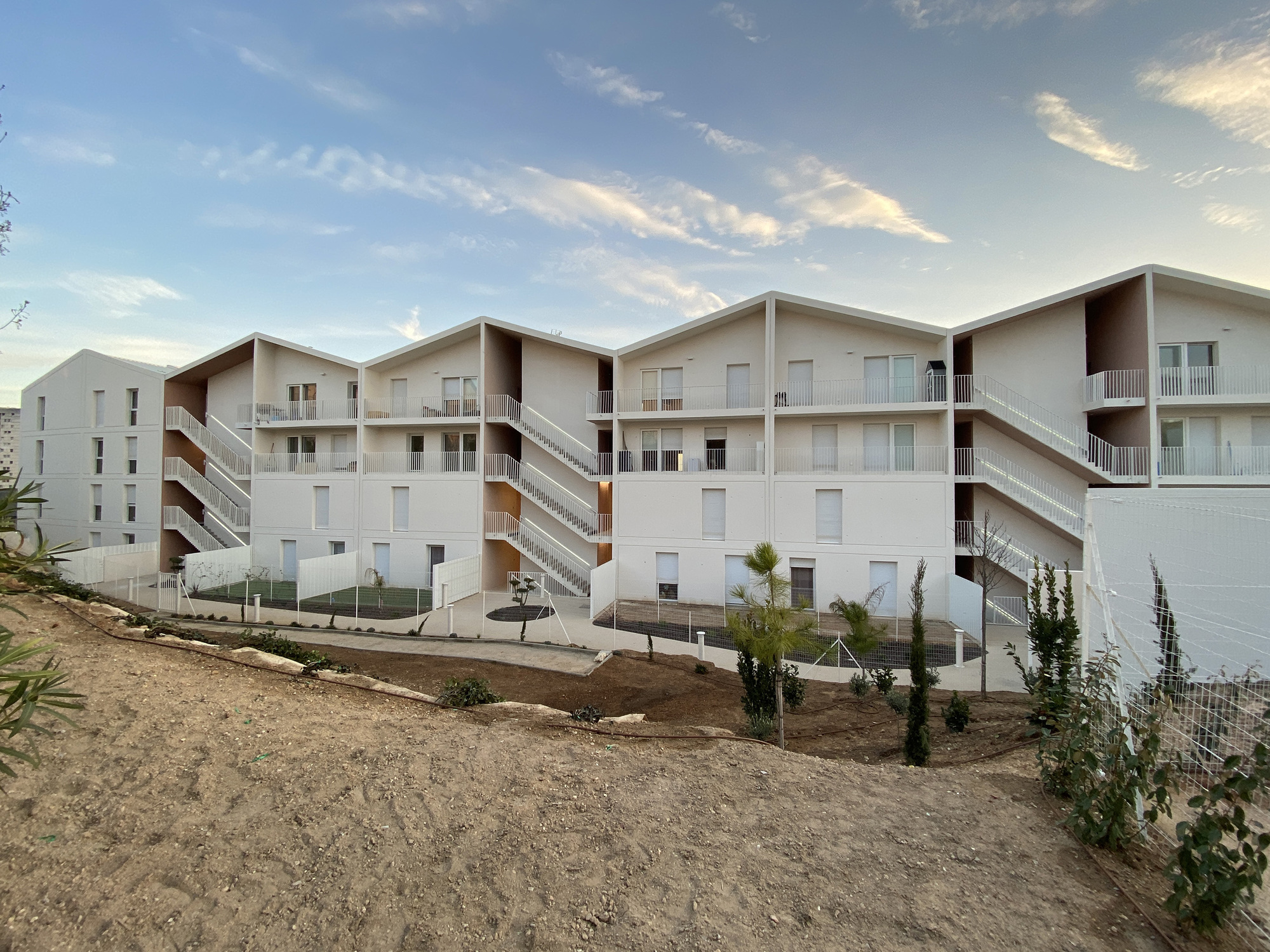 Text description provided by the architects. The site is a disjointed, heterogeneous and generic peripheral city, the city of roundabouts, cars and standardized “product” architecture. But it is also the territory open to the south-west towards the sea and to the north-east towards the hills of the Etoile massif. The architectural context varies between suburbs, small collectives without interest and sheds of activities. The middle of this territory of the 20th century resists the “identity markers” linked to a historical agricultural activity of the site as well as to a strong landscape structure.

In response to this urban situation, our strategy consists in proposing a linear building inscribed in the “lines of force” of its environment which are the topography, the landscape alignments, and the establishment of agricultural buildings nearby. The project seeks to respond to the pre-existing conditions of the site by enhancing a linear south facade open to the landscape. This legitimacy of the built form is reinforced by the morphological work of the roofs which borrow from the neighboring built forms a language of gable roofing with double slope.

We have created five adjoining four-storey apartments. This architectural expression is based on the transition effect created between the small residential and agricultural scale to the south and the collective housing complexes and the volumes of activity.

The way of life is that of the Mediterranean climate and culture where you live outside or you share access to your accommodation from the outside with a common garden as a hall but where the autonomy of the accommodation is very strong. These are dwellings where the gradation from the public to the intimate is done naturally in a staging of all the movements. It is a spatial device that allows you to share looks, exchange a few words and create conviviality.

The use of raw architectural concrete participates in this vision of a “southern architecture” anchored in the minerality, the know-how and the durability of the work. This project proposes a rationalist approach registered in a search for controlled costs, an essentialization of the constructive part allowing to concentrate the efforts on the qualities of life in the housing. We have thus sought to limit earthworks, simplify the structure, make it repetitive and expressive (bearing partitions), work on compactness, reduce infrastructure with an open basement level to the southeast, etc. essential for the feasibility of the project.

We offer an identical current constructive framework of T2, T3, and T4 allowing a great flexibility in the distribution of the apartments (in the marketing phase we allowed to modify the programming without touching the external envelope of the project). The idea is simple: a housing crossing north-south is open to the landscape with exteriors on each facade.

We seek to enhance the use of housing by offering a large majority of “real” bright and neat apartments with living rooms facing south and north for an optimal quality of life in a Mediterranean climate). We offer exterior extensions for each apartment: – a loggia to the south, designed as an extension of the living rooms, “intelligent” and qualified spaces (2.20 m wide, equipped with integrated storage, solar protection, etc.) ; – a balcony to the north, allowing you to go out in front, very useful in summer especially.

The apartments on the ground floor are all extended by private gardens while those in the attic benefit from very large volumes under the roofs offering comfort and high scalability of housing.