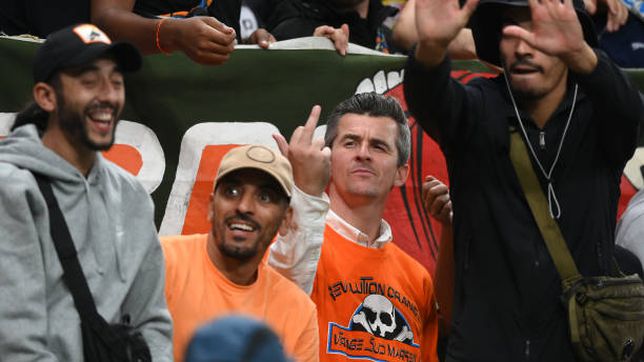 He only spent a year in Marseille – on loan during the 2012/2013 season from QPR – but Marseille fans have fond memories of Joey Barton. The former footballer and current Bristol Rovers manager watched the Champions League game between his former side and Tottenham in a rather peculiar way. Barton, who was attending the European game with his son, bumped into several Marseille fans at a pub near the Tottenham Hotspur stadium. The former England player, wearing a Marseille ultras jersey (“Virage Sud Marseille”), walked to the stadium surrounded by supporters and watched the game from the outside stand, just in front of the Marseille ultras banner .

During the match, the former Marseille player was spotted taking pictures of his son with club supporters. However, the win went Tottenham’s way. The Bristol Rovers coach felt very supported by the Olympian fans throughout the game, for which he wanted to thank them on social networks. “Thank you to the supporters of Olympique de Marseille. The best. Thanks to you, my son and I feel welcome. Always in my heart. Go OM,” Barton wrote on his Instagram account, along with several videos and photos on the way to and inside the stadium.