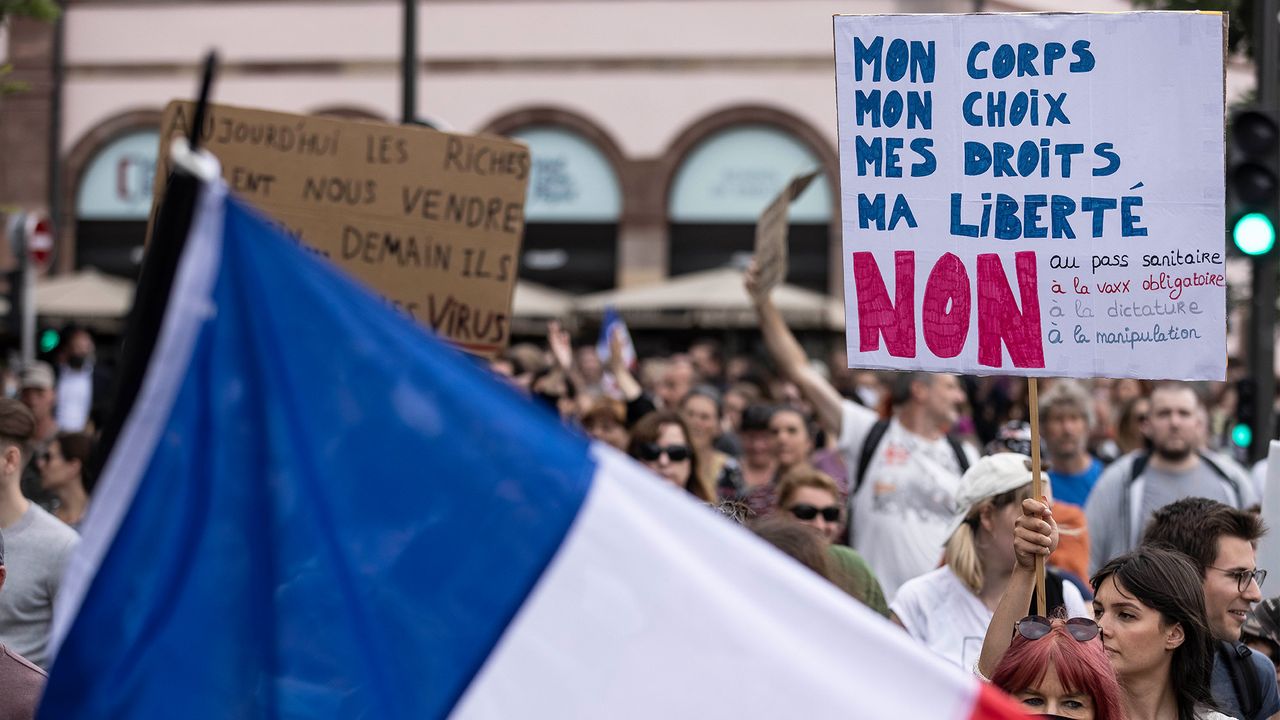 
On July 17, tens of thousands of people demonstrated in France against mandatory coronavirus vaccination and social distancing restrictions. The protests were called and supported by neo-fascist figures, including Marion Maréchal Le Pen and Florian Philippot, the leader of the Party of Patriots.

The protest took place against the backdrop of an increase in COVID-19 across Europe, driven by the delta variant. The Macron government rejects science-based social distancing policies, including the closure of non-essential workplaces and schools. On the contrary, Macron only proposes that health workers be vaccinated and that a ‘disease pass’ – demonstrating either a complete vaccination, or a recent negative test result, or a recent recovery from the virus – before entering the fields. restaurants and social events. Marshal Le Pen and Philippot themselves denounced compulsory vaccination and any social restriction aimed at saving lives.

Their call to let the virus spread unhindered won support not only from neo-fascist activists, but also within Jean-Luc Mélenchon’s La France insoumise (France rebellious —LFI), as well as a layer of the Greens. Some rebels joined the demonstrations of Philippot and Maréchal, which gathered thousands of people in several demonstrations in Paris, 5,500 in Montpellier, 4,500 in Marseille, 2,800 in Strasbourg, 2,500 in Toulouse and Nantes, 2,000 in Rennes and 1,200 in Perpignan and Nancy.

At the head of the march in Paris were Philippot, former leader of the National Rally (RN) of Marine Le Pen; Nicolas Dupont-Aignan of the far-right party Debout la France; and Jacline Mouraud, a known figure of the “yellow vests” who was widely opposed among the demonstrators after having urged them to run for positions within the state apparatus. There were chants of “Macron resignation” and “Liberty”, and placards declaring “No to compulsory vaccination.” Vaccine freedom is a right ”, or“ Hands off our children. “

The demonstration had a heterogeneous character. Among the demonstrators were health workers wanting to denounce Macron’s policy, restaurant owners opposed to the obligation to inspect their customers’ “health passes”, and former “yellow vests”. Jérôme Rodrigues, a well-known figure in the movement whose eye was shot by the police, called for refusing vaccination, but refused to participate in the demonstration led by the neo-fascists.

However, the political character of this demonstration was clearly dominated by the extreme right. In France and around the world, the far right is leading the opposition to a science-guided policy of vaccination and social distancing to contain the virus. This opposition is fundamentally reactionary, given that the pandemic has already claimed more than four million lives worldwide, and 1.1 million in Europe, and is accelerating again.

Philippot praised the tacit support of the police for the policy of spreading the virus, declaring on Twitter: “I meet a surprising number of restaurateurs who have absolutely no intention of supporting the #PassSanitaire [health pass] and, even more unprecedented, police officers telling me that they have no intention of actively enforcing them… Humanity still exists.

Marion Maréchal Le Pen, present at the demonstration, said to the far right Current values: “I am resolutely opposed to compulsory vaccination against COVID and the health pass. It seems to me that the right to doubt must still be allowed in the land of Descartes! She added: “And now, do you have to justify your state of health to a stranger in order to have the right to drink a coffee? There is an obvious drift that is taking place, a radicalization of those who hold the reins of power.

At the same time, neo-fascists were working to confuse with false and obscene amalgamations between vaccinations that could save millions, the anti-black apartheid of the South African regime in the 20th century and the genocide of the Jews. in fascist Europe. The transparent aim of this operation was to try to give a “left” veneer to their far right policy of spreading the virus among the population.

The vaccines, which in France include Pfizer, Moderna and AstraZeneca, have been scientifically tested and their effectiveness verified in numerous studies. Their use in science-driven health policy is an urgent necessity that would save millions. They can have dangerous side effects for a few individuals per million vaccinated, but the virus kills tens of thousands per million infected. There is no scientific reason to oppose it.

Workers and small business owners are angry and suspicious of the policies pursued by Macron and the European Union, whose deaths now number in the millions. But the financial aristocracy exploits these sentiments, promoting far-right forces, to push official politics even further to the right. Using the lies of the neo-fascists, he intends to end any policy of compulsory vaccination and containment, which would require investments in health care rather than bailouts for banks and financial markets.

Now, neo-fascists are calling for the spread of the virus, a policy essentially supported by Macron and the police, while polls show that more than 70% of the population in France supports the vaccination and compulsory vaccination of police officers. health.

The political force that plays the central role in confusing and presenting this far-right politics as popular is LFI.

LFI leader in Picardy, François Ruffin, added his voice to calls for neo-fascists to demonstrate. “I live with it as a humiliation,” Ruffin said on BFM-TV. Although vaccinated, he wanted to “fight” against compulsory vaccination. Declaring that “I call to demonstrate”, he added that Macron, “when he has power, tends to abuse it. Here, he abuses it, with this absolute monarchy… and he must meet a limit. And that limit must be us.

But Ruffin’s policies involve all of LFI, as Mélenchon directly endorsed in a cynical video released on Friday, in which he made it clear he would include those among his supporters who would join the neo-fascist protest.

On the one hand, he hinted that he was offended by the obscene political arguments of the organizers of the anti-vaccine protest. He implored his supporters who were going to join the far-right demonstration not to use political amalgamations that would discredit him. He urged them to avoid “completely inappropriate language. No, the vaccine distributed free is not apartheid and its distribution is not the Holocaust … I call for a return to reason.

On the other hand, Mélenchon took up all the arguments of the extreme right against not only Macron’s reactionary policy, but also a scientific policy against the coronavirus.

He called the obligation to present a health pass a “profound modification of our way of life”, “a considerable restriction of freedoms” and “a collective conditioning which pushes everyone at all times to feel obliged to say who they are. is, what he is sick of “. with, and what they are not sick of. He claimed that this “totally abnormal” situation would lead to “a society of permanent and universal control” and to “a society of permanent conflict”.

These anti-scientific remarks and the resulting political alignment of LFI with the far right should sound a warning to workers in France and across Europe.

As hundreds of thousands of lives are once again threatened by the spread of the Delta variant, the entire ruling elite is pursuing a murderous policy of allowing the virus to spread and infect or even kill young, unvaccinated people. and vulnerable.

To prevent a new wave of deaths sanctioned by the far right and the pseudo-left from sweeping through Europe, the working class must mobilize politically against the entire ruling elite. This requires the construction of basic safety committees in workplaces and schools, independent of the trade union apparatuses, and the construction of a European and international political movement for socialism and for a scientific fight against the pandemic.

Macron is in a hole of his own making