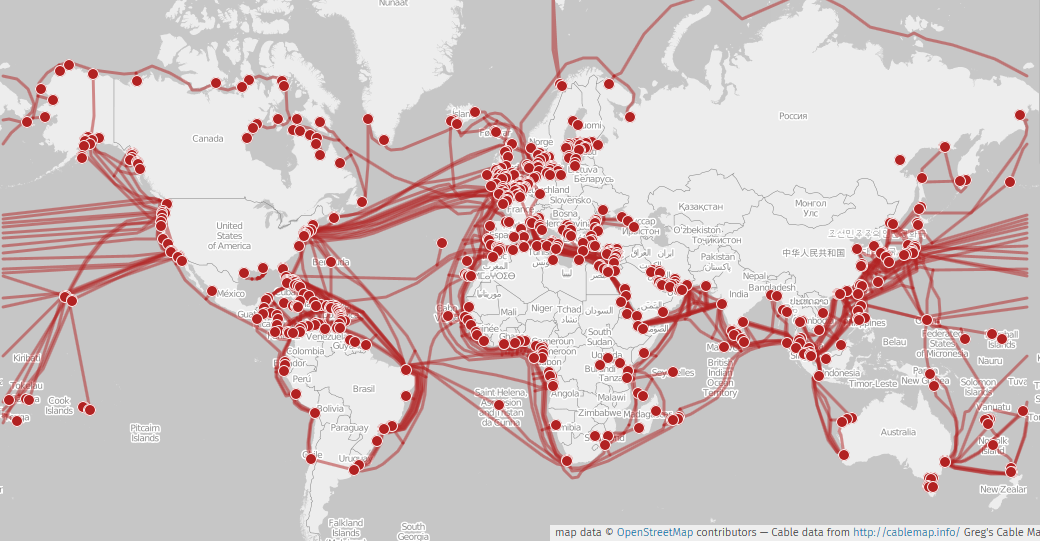 Internet: Why the vulnerability of submarine cables threatens Europe

Forget the constellations of satellites, the hundreds of SpaceX launches and notions of “cloud” or wireless: all of these tend to make us believe that our smartphones, computers and other machines are linked to each other through space. . However, this is not the case: satellites represent barely 1% of data exchanges.

The reason is simple: they cost a lot more than cables and are infinitely slower. Most of it – almost 99% of total Internet traffic – is carried by undersea lines, the real â€œbackboneâ€ of global telecommunications.

There are more than 420 in the world, totaling 1.3 million kilometers, more than three times the distance from Earth to the Moon. The record: 39,000 kilometers long for the SEA-ME-WE 3 cable, which links South-East Asia to Western Europe via the Red Sea.

It is estimated that more than 10,000 billion dollars in daily financial transactions, or four times the annual GDP of France, now pass through these â€œdeep sea highwaysâ€. This is particularly the case with the main global financial exchange system, SWIFT (Society for Global Interbank Financial Telecommunications).

The security of these transactions is a political, economic and social issue. This is a major problem that has long been ignored.

With 36 new cables, the year 2020 was marked by a record number of deployments

However, the extreme geographical concentration of cables, particularly at their landing point (Marseille, Brittany, Cornwall, etc.), makes them particularly vulnerable.

These infrastructures are today as crucial as gas and oil pipelines. But are they as well protected?

Modern submarine cables use optical fiber to transmit data at the speed of light. However, while cables are usually reinforced in close proximity to the shore, the average diameter of an undersea cable is not significantly larger than that of a garden hose:

For several years, the great powers have been waging a half-open, half-secret â€œhybrid warâ€ for the control of these cables. As Europe increasingly focuses on cybersecurity threats, investing in the security and resilience of the physical infrastructure that underpins its communications with the world does not appear to be a priority today.

Failure to act will only make these systems more vulnerable to espionage and disruptions that cut data flows and undermine the security of the continent.

On average, there are over a hundred submarine cable breaks every year, usually caused by fishing boats pulling the anchors.

Intentional attacks are hard to measure, but the movements of some ships began to gain attention as early as 2014: their route followed submarine telecommunications cables.

The first attacks of the modern era date back to 2017: cables Great Britain – USA, then France – United States, torn by trawlers of a great power customary to the use of irregular forces during international tensions. If these attacks remain unknown to the general public, they are nonetheless worrying, and demonstrate the ability of external powers to cut Europe off from the rest of the world. It is recalled that in 2007, Vietnamese fishermen cut an underwater cable in order to recover the composite materials and try to resell them. Vietnam thus lost nearly 90% of its connectivity with the rest of the world during a period of three weeks. An attack of this type is extremely easy to carry out, including by non-state actors.

Cutting submarine cables, an ancient and proven practice of warfare

Recent attacks on cables carrying voice and data traffic between North America and Europe make it look like a new development. But this is not the case: France and the United Kingdom have already lived this experience … at the hands of the Germans during the First World War! These cables were part of the worldwide cable telegraphy network.

Likewise, the United States itself has cut the cables in wartime in order to disrupt an enemy power’s ability to command and control its distant forces.

The first such attacks took place in 1898, during the Spanish-American War. That year, in Manila Bay (in the Philippines), the USS Zafiro cut the cable connecting Manila to the Asian continent in order to isolate the Philippines from the rest of the world, as well as the cable connecting Manila to the Philippine city of Capiz . Other spectacular cable attacks have taken place in the Caribbean, plunging Spain into darkness over the unfolding conflict in Puerto Rico and Cuba, which largely contributed to the final victory of the United States.

The Cienfuegos cable cut during the Spanish-American War, May 11, 1898

Sensitive to the exploits, at the time very publicized, of the â€œbrave sailorsâ€, the Congress will award to these sailors 51 of the 112 medals of honor awarded for the Spanish-American war.

The main causes of risk

Today, several trends are accelerating the risks to the security and resiliency of these cables.

At the other end of the spectrum, GAFAMs now have the financial and technical capacity to build their own cables. Thus, the Dunant cable, which connects France to the United States, is entirely owned by Google.

The Chinese giants have also embarked on a strategy of underwater conquest: this is the case of the Peace cable, linking China to Marseille, owned by the Hengtong company, considered by the Chinese government as a model of “civil integration”. “. military “.

Another threat, espionage, requires specially equipped submarines, or submersibles operating from ships, capable of intercepting, or even modifying, data passing through fiber-optic cables without damaging it. To date, only China, Russia and the United States have such resources.

The most vulnerable point of submarine cables, however, is where they reach land: the landing stations. Thus, the town of LÃ¨ge-Cap-Ferret (33), on the edge of the Porge where the interface room between the Franco-American cable “AmitiÃ©” will be built, has lately become a veritable nest of spies. , according to informed sources.

But the most worrying trend is that more and more cable operators are using remote management systems for their cable networks. Cable owners prefer them because they save them on personnel costs. However, these systems have poor security, which exposes cables to cybersecurity risks.

It is necessary to develop a cable fixing force

Faced with physical threats to cables, Japan and the United States recently launched a series of initiatives aimed at securing these infrastructures.

The programs of the United States Maritime Administration promote the development and maintenance of an “adequate and sufficient merchant navy capable of serving as a naval and military auxiliary in times of war or national emergency” through endowments. in equity, CAPEX grants, to private shipyards building in particular ships capable of repairing submarine cables.

Cable ships are generally designed around large tanks which store the optical fiber and then put it in place. For such an operation, these ships need power and agility: their generators produce up to 12 megawatts of electricity that power five propellers, allowing the ship to move in multiple dimensions.

Today there are around forty cable ships in the world. France would have nine, including only one for the maintenance of all the cables from the North Atlantic to the Baltic Sea: the Pierre de Fermat, based in Brest.

These vessels are able to set sail in less than 24 hours if damage is detected on the cable. On board, a crew of about sixty sailors has underwater drones and other instruments are used for repairs. Pierre de Fermat was able to inspect and repair very quickly the transatlantic cable damaged by a third party power in 2017.

But what would happen in the event of multiple attacks? Neither France nor the United Kingdom currently have the necessary means to defend and repair these cables in the event of simultaneous attacks.

The US executive recently looked into the issue. In addition to the extension of the SSGP, small shipyard subsidy program, he encouraged the Maritime Administration to enlist various civil society associations, such as the International Propeller Club, in programs aimed at minimizing these threats. The idea is to create a kind of â€œsubmarine cable militiaâ€ capable of intervening quickly in the event of a crisis. The Propeller Club has more than 6,000 members and recently obtained $ 3.5 billion in aid to the maritime industry in the fight against Covid-19.

France is the entry point for most of the cables connecting Europe to the rest of the world.

The cost for French public finances alone of a program to secure submarine cables would however be prohibitive, even if civil society would be largely involved in it, on the American model.

Likewise, the creation of an â€œsubmarine cable Airbusâ€ capable of competing with GAFAMs, whose market share could go from 5 to 90% in six years, will obviously only become a reality. provided that Europe makes it a central theme.

In a context of growing international tensions, the question of creating a European program on the model of the American and Japanese programs, aimed at increasing the number of operations to deter attacks on these infrastructures and at developing a construction and repair capacity in the height of the stakes, deserves to be asked. .

This analysis was written by Serge Besanger, lecturer-researcher in business administration at the Ã‰cole supÃ©rieure du commerce foreigner (ESCE) and at the INSEEC U research center.
The original article was published on the website of The conversation.

Mauricio Pochettino on the words of PSG predecessor Thomas Tuchel: “I come from a culture of education and respect”