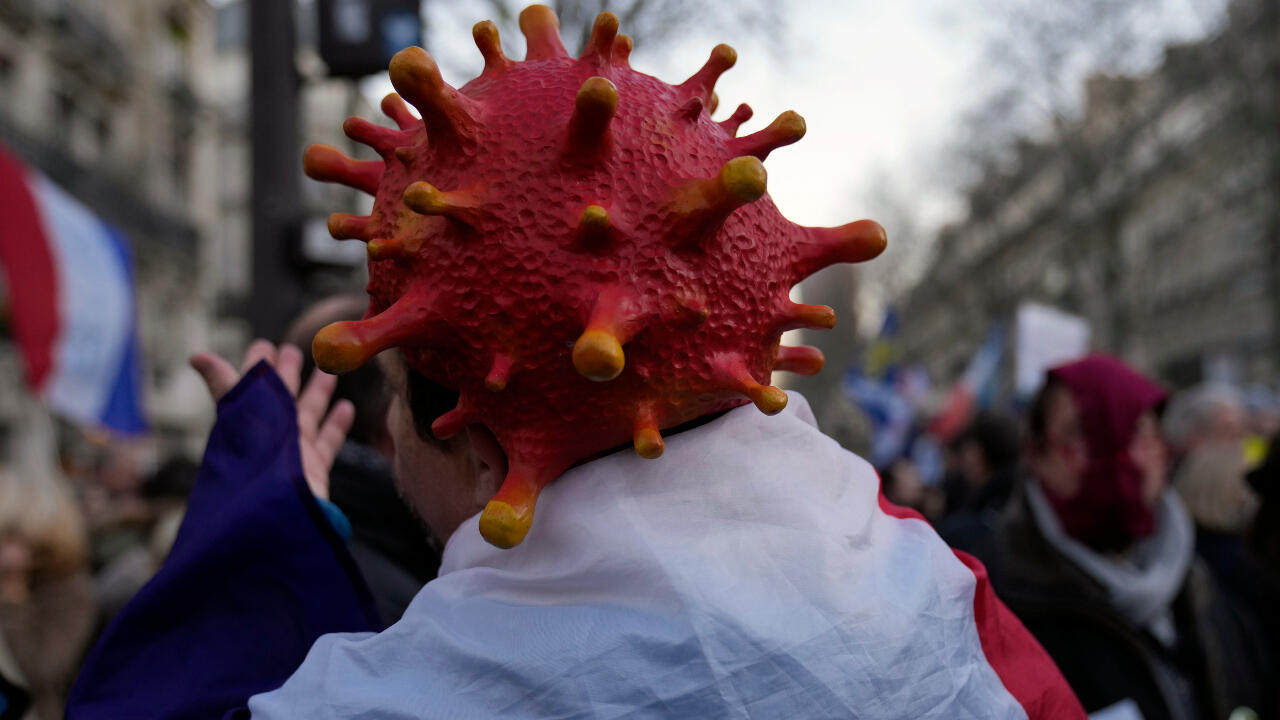 In a vaccine-skeptical France, candidates walk a tightrope on Covid measures

Vaccination debates and Covid-19 restrictions have been divisive both on and off the presidential campaign in France, which ranks among the most vaccine-skeptical countries in the world. FRANCE 24 returns to what the candidates said concerning the measures to contain the Covid-19.

After a hesitant start, the vaccination campaign against Covid-19 in vaccine-skeptical France has caught up with and even surpassed that of many of its neighbours, at least in part thanks to the boost provided by the introduction in July the country’s health pass, which was compulsory for access to restaurants, certain transport and cultural places. The health pass, which was also available to people who could show a recent negative Covid-19 test, evolved into a vaccination pass on January 24 which required actual proof of vaccination and/or infection.

Some 80% of the French population is at least partially vaccinated – or 85% of those eligible – although those queuing for their first doses have slowed to less than 10,000 people a day. About 2,000 of those first daily doses are for children ages 5 to 11, nearly two months into a pediatric vaccination campaign that can only be described as a flop. With just over 3% of primary school children vaccinated, according to the health authority Santé Publique France, France is well out of step with its much more enthusiastic European neighbors.

From Tuesday, the vaccine passes the 4 million French adults who have not received a booster four months after their second dose became invalid, unless there is proof of infection: In France, two doses and one infection – or one dose and two infections – are considered equal to three doses of vaccine.

Almost as soon as the vaccine pass came into effect in January, the government began debating when it would no longer be needed. Health Minister Olivier Véran said the requirement could be lifted by July; The government spokesman, Gabriel Attal, had guessed it at the end of March – well in time, it turns out, for the first round of the presidential election on April 10.

A word about the holder

With Emmanuel Macron at the helm, France showed ostentatious caution in launching its Covid-19 vaccination campaign in December 2020 and was also in no rush to launch the vaccination campaign for young children a year later. But when it comes to vaccines, Macron is nonetheless seen as a steady hand. He became known for ostensibly urging adults to get vaccinated with the threat of depriving them of French entertainments such as food and drink. In a prime-time televised address last July, Macron announced that visiting cinemas, restaurants and museums would soon be made conditional on showing a health pass, sending vaccinations (and vaccinations) skyrocketing. Covid-19 test reservations).

As Omicron surged in December, it doubled down, turning the health pass into a vaccine pass, further tightening the screws. He sparked outrage in January when he explained his thinking in the starkest terms. “The non-vaccinated, I really want to piss them off. And so we’re going to do it, until the end. That’s the strategy”, he chanted during an interview at the town hall with the daily newspaper Le Parisien.

Yet Macron has ruled out making the Covid-19 vaccine formally mandatory. The centrist incumbent has yet to formally declare his re-election bid, but there is no doubt Macron will run again.

So where are the other main presidential challengers on vaccination issues?

None of the main candidates for the French presidency have come out against the Covid-19 vaccine. Even far-right campaigners – Éric Zemmour, Marine Le Pen and Nicolas Dupont-Aignan – have encouraged the elderly and vulnerable to get vaccinated, while walking a fine line to keep both segments pro- and anti-vax of their constituents on his side.

Each of the three right-wing members is opposed to vaccination mandates. national rally Candidate (National Rally) Le Pen called the policy of suspending health workers without pay for refusing vaccinations “scandalous” and “brutal” for caregivers as well as “absolute stupidity” when patients need their care. But of the three, only Dupont-Aignan himself has not been vaccinated.

Always against the grain, Zemmour even wrote that “it is not fair that France should be absent from the race for vaccines and treatments against Covid-19 when we are the country of [vaccine pioneer Louis] Pasteur,” accusing Macron at least in part.

Meanwhile, traditional Conservative candidate Valérie Pécresse opposes a universal Covid-19 vaccination mandate. But she came out clearly in favor of Macron’s vaccination pass, before covering herself with criticism of her late implementation to appease opponents within her. The Republicans Party.

Two left-leaning candidates – Anne Hidalgo of the Socialist Party and independent Popular Primary winner Christiane Taubira – are in the minority to back a nationwide vaccination mandate. Hidalgo’s campaign denounced the “hypocrisy” of the government’s vaccination pass, which she called a de facto universal mandate that her socialist party says simply places the onus for enforcement on others.

Taubira also suggested that a “straightforward” national requirement, properly explained to the public, is preferable to Macron’s vaccination pass. “The vaccine pass doesn’t bother me, what bothers me is leaving it up to citizens, like restaurateurs and traders, to carry out identity checks on their fellow citizens,” Taubira said, who served as Minister of Justice under former Socialist President Francois Hollande. Radio France Inter last month.

But for Taubira, the rambling latecomer to this race from French Guiana, her recent stance is something of an about-face. In September, she was roundly criticized for refusing to recommend the vaccine to residents of this heavily under-vaccinated French overseas territory.

Elsewhere on the left, after initial whispers in favor of compulsory vaccination for adults, Greens candidate Yannick Jadot has since decided that it was “better to convince than to compel”.

The far-left candidate Jean-Luc Mélenchon, deputy of the lower house, said the same thing about compulsory vaccination. He criticized the ‘vaccine pass’ to the chair of the National Assembly as ‘100% ineffective’ because it could not guard against Omicron infections.

French Communist Party candidate Fabien Roussel has said he will revoke the vaccination pass requirement as president. Instead, he campaigns to provide doctors with lists of their unvaccinated patients so they can “go door-to-door” persuading them, telling France Info that he “prefers a benevolent society to a coercive one”.

Far-right candidates have been the most vocal about France’s pediatric vaccination campaign, each vehemently opposing it. Zemmour said he was downright “hostile” to the idea and that vaccinating children against Covid-19 “is beyond belief”.

Le Pen said she was opposed because “the benefit/risk ratio for children is zero”, given that children have been less affected by the virus. “They have almost no chance of being victims of a serious form, so vaccinating them is, in my opinion, a form of abuse,” she told France Inter radio last month, although that she said she would make an exception for children who already have a chronic illness. diseases.

Dupont-Aignan, meanwhile, also accused the government of putting children at risk with the vaccine when he says the risks outweigh the benefits. He called the policy “horrible” speaking before the National Assembly’s lower house in January.

Perhaps unsurprisingly in a country currently vaccinating fewer than 2,000 eligible children under the age of 12 on average per day, most other candidates waver between supporting and not opposing. Many (Jadot, Roussel, candidate of the New Anticapitalist Philippe Poutou) emphasize the vaccination of vulnerable children in particular or lean on the right of parents to choose their children themselves (Mélenchon, Jadot), even though the Covid vaccine -19 requires for primary school students are not on the table in France.

In a rare show of unity on the left – where candidates have otherwise been blatantly reluctant to join forces – four presidential candidates co-signed an open letter to Macron in January calling for the suspension of intellectual property rights on Covid-19 vaccines to allow their mass production in developing countries. The far left Mélenchon, the Greens Jadot, the Socialist Party candidate Hidalgo and the New Anti-Capitalist Party candidate Poutou noted in the joint missive that only 1% of available Covid-19 vaccines went to poor countries during the previous year and 74% to the richest.

“Increasing production capacity will be decisive in controlling the pandemic and countering the potential arrival of new variants,” the leftist quartet wrote as Omicron raged, calling on Macron to drop French opposition on the issue of vaccine patents. As France began her six-month term as rotating president of the Council of the EU, they “officially” asked Macron to “speak publicly in favor of the ‘lifting of patents'” and called on the World Health Organization to look into the matter.

Communist candidate Roussel said separately in January that France should lead the way in lifting patents on vaccines.

As early as June 2020, Macron had pleaded for Covid-19 vaccines to become a “global public good”. But he also held firmly to the idea that intellectual property rights are essential to the kind of innovation that leads to vaccines. So far, the EU has remained firm in its refusal to lift patent protection.

“We do not want to call into question the intellectual property system which allows innovation and which has notably enabled humanity to very quickly have a vaccine against Covid-19″, declared the French Minister of Commerce on Monday. , Franck Riester, when he received his European counterparts in Marseille. The Minister nevertheless added: “We believe that it is important that there is access to the vaccine for all and that the countries which wish to produce the vaccines themselves on their territory can do so. We believe that intellectual property should never be a hindrance. in this capacity.”

The Republicans The candidate Pécresse, former minister of higher education and research under former conservative President Nicolas Sarkozy, also spoke out in favor of preserving intellectual property rights in order to encourage research.

On the far right, Le Pen said the focus should be on getting doses to developing countries rather than lifting patents. On the other hand, Dupont-Aignan, a former right-wing ally of Le Pen, came out in his favour, describing it as “unacceptable that large pharmaceutical companies, which have benefited from public funds, are making exorbitant profits in the midst of a pandemic”.