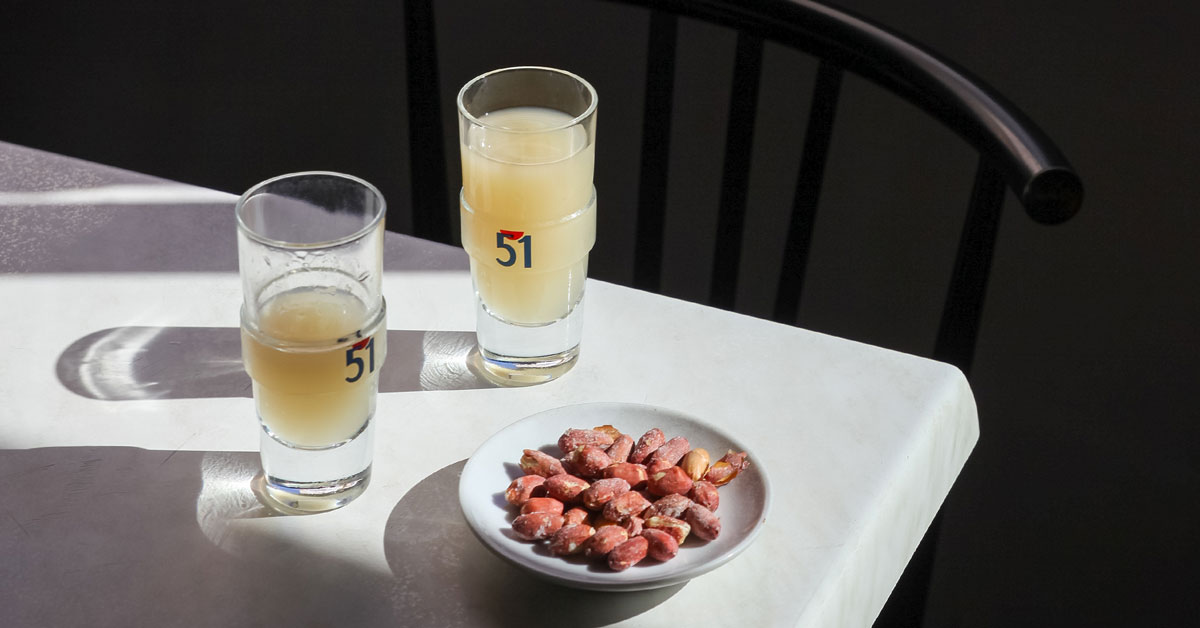 Pastis is to southern France what sherry is to Spain, spritz to Italy – a drink, yes, but also a ritual in the form of a drink, woven into the fabric of culture.

Pastis is both the name of an aniseed liqueur and the drink obtained by adding a measure of the said liqueur to a trickle of cold water. Like its large Mediterranean family of anise spirits – Greek ouzo, Turkish raki, Italian sambuca and arak, produced in many Middle Eastern countries – French pastis is dominated by anise and licorice, infused with a myriad of other herbs and spices depending on the brand. The ritual of drinking pastis is rooted in everyday life in the south of France: The refreshing weight of a cool glass in hand is most at home in Provence, alongside a soundtrack of cicadas, petanque and from the sea in the distance, another slowly unfolding summer day.

As obvious as its appeal is, this rite is nowhere near securing the foothold in the United States that other European traditions have, despite all the ease and idiosyncrasy that, say, the aperitivo cocktail possesses. But it’s ready for a second look, either as a no-frills ritual or easily upgraded, whether by swapping water for fresh watermelon juice or yogurt (more on both in a second).

Long made and drunk at home in Provence—pastis comes from provençal pastisson, or “mixture” – the drink owes its growing popularity largely to the (temporary) downfall of other alcoholic beverages in France. In the mid-19th century, when phylloxera devastated European vines, the French turned to absinthe made from anise. In 1915, the production of absinthe was banned in part because of the supposed mildly altering effects of its signature ingredient, wormwood. France shifted its fiery focus again, this time to pastis, which is lower in alcohol, absinthe-free and carries many of the same botanicals as absinthe.

The transition from locally made drink to commercial production began in 1932 with Paul Ricard, who fashioned his version of the spirit in Marseille, marketing it as pastis. Pernod, one of the main producers of absinthe, also started making its own version of the anise-based liqueur in 1938, although it was not labeled as pastis and was drier than Ricard’s version. , with strong notes of star anise and fennel. Pernod and the slightly sweeter, licorice-flavored Ricard are now produced by Pernod Ricard, as the brands merged in 1975.

Although the best known, Ricard and Pernod are by no means the only producers to look out for. Henry Bardouin, produced in Forcalquier, just over an hour’s drive north of Marseille, is smooth and nuanced, blending over 65 herbs and spices in the bottle. Natacha David, author of Drink lightly, often reached for Argala, a pastis made with alpine herbs and Mediterranean spices produced in the Italian village of Roccavione, on the border of France. Other bottles, such as Vintage Pastis Château des Creissauds, Plain Pastis and Pastis La Chicane, are best sought by drinking pastis in his ancestral home. (These bottles can be smuggled between layers of dirty clothes.)

Then, of course, you have to decide how you want to drink it. The traditional method for pouring pastis is as simple as your tasting afternoon should be: add an ounce or two of liqueur to a glass (tall, short, ceramic, depending on your preference), serve with a pitcher of ice water and, if you’re not a purist, a small bucket of ice. Pour the water into the pastis in the ratio of your choice (1 ounce of pastis and 4-5 ounces of water is a good middle standard to start with). As the pastis mixes with the water, the resulting drink takes on a characteristic milky white. The transformation from a clear cloud to a pearly cloud is the result of mixing water with the oils of the pastis, a combination that forms microscopic droplets that reflect and scatter light, obscuring the glass. Finally, and only if desired, ice is added. David suggests continuing to add water and ice throughout the afternoon, thinning, stretching and chilling the drink for hours. “It feels like an endless drink,” she says.

In France, if you want to change the flavor without shifting tradition too much, it is common to add a dash of syrup to the original formula. In the glass, add three parts pastis to one part grenadine for a Tomato, mint syrup for a Parrot, orgeat for a Mauresque or strawberry syrup for a Rourou.

Or replace the water with something else. “Pastis is actually a wonderful mixer,” says David. “You feel like it’s going to dominate everything, but it can kind of fade into the background while obviously being the base of the drink.” To this end, David uses fresh Granny Smith apple juice in his Color me dazzled, a drink inspired by the classic Moorish. Orlando Franklin McCray, meanwhile, roll out the watermelon juice, which it clarifies to preserve the milky white color of the drink. (Although you can use freshly squeezed watermelon juice here, keep in mind that the color of the drink will be more of a pinkish brown, but the flavor will still be delicious.)

Orgeat made from oat milk is combined with pastis and Granny Smith apple juice in this Moorish riff.

Margot Lecarpentier, founder of Combat in Paris, combines pastis with a combination of fromage blanc and coconut milk. “Dairy with licorice reminds me of pastries in the south of France,” she said. “Jher fat catches the sweet taste of anise [and] makes it a little less sweet. To prepare the drink, Lecarpentier combines equal parts cottage cheese, or even plain whole yogurt, with coconut milk, then adds 2 1/2 ounces of this mixture to 1 ounce of pastis over crushed ice. Crushed ice is the key to the evolution of the drink. “You have nice, powerful sips to start with, then it gets more diluted, so the drink changes and adapts to the weather and makes it less alcoholic.” For a more sour and acidic flavor, Lecarpentier suggests using only cottage cheese or yogurt. Pastis can also be used as a substitute for absinthe in cocktails such as Sazerac or Corpse Reviver #2. Or, if you prefer your pastis shaken, look no further than Audrey Saunders’ modern classic, the French pearl.

The path to drinking more pastis can and should be refreshingly simple. From the age-old Provençal model of pastis and water to the subtle addition of flavored syrup, a simple wine syrup at coconut syrup and more– to add a layer of intrigue, there are many ways to start. Whatever the format, take the time to make it more of a ritual than a means to an end. Relax, prepare a snack, sit down, add more water or ice, switch seats, then pour another one.

Get our latest features and recipes every week.