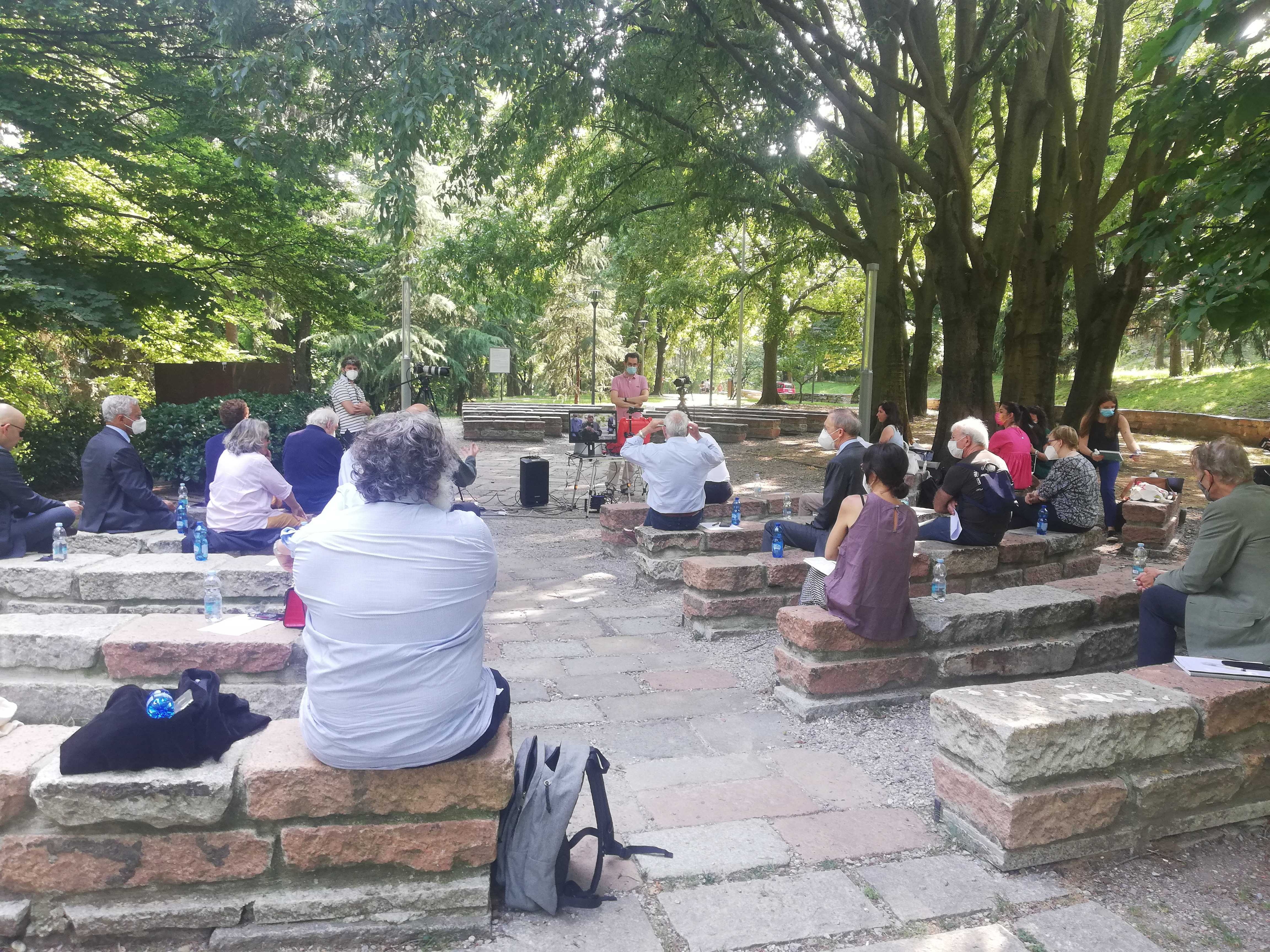 
Yesterday at the Garden of the Righteous of the World in Milan, the annual meeting with Gariwoambassadors and collaborators of took place. As usual, the assembly focused on Gariwothe work of the past year and its future goals and objectives. Gariwo’s work, which is based on a strong educational mission through the figures of the Righteous, is increasingly interested in the theme of prevention of genocide.

The assembly began with opening remarks by Gariwothe staff of. Martina Landi, Gariwothe editor-in-chief of, focused on actions taken by Gariwo to enrich its educational mission: “one of the most important activities of this year has been the agreement with CDEC (Fondazione Centro di Documentazione Ebraica Contemporanea): our collaboration aims to promote research on the figures of the Righteous, to organize conferences and seminars for teachers, and to work on educational projects with schools, to promote the fight against anti-Semitism and the dissemination of positive examples with the youngest ”. “This collaboration – said Landi – will have a considerable impact on Gariwoof the education sector ”. Landi also mentioned a new educational project in Gariwo, produced in collaboration with Spostiamo Mari e Monti, an association based in Turin and long-standing partner of Gariwo. The project is based on exchange projects and the training of university teachers who work with high school students in a didactic process leading to the opening of new gardens in schools.

Manuela Rippo, responsible for Gariwothe gardens, described the many ongoing garden projects in Italy and around the world, including the future openings of certain gardens in Stockholm, Marseille, Argentina, Kurdistan Ventotene, and San Patrignano. Rippo also mentioned the requalification of the Garden of the Righteous in Neve Shalom, the ongoing collaboration with the garden of Warsaw, and the future name of the street leading to the Italian Ministry of Foreign Affairs as “Viale dei Giusti»(Rue des Justes). “The engagement of the ambassadors – said Rippo – was the key to all this: there is a permanent network, which we like to see as a cultural movement based on active citizenship, responsibility and human rights”.

Francesco Cataluccio, writer, Gariwocollaborator of for years, and now his new editorial manager, presented the set Encyclopedia of the Righteous, which Gariwo is currently working on in Italian and will soon be released in English. the Encyclopedia of the Righteous is based on materials that Gariwo has collected over the past few years: it is a digital encyclopedia, which means that it can be seen as an endless work in progress, open to everyone’s contribution. “Our main focus – Cataluccio said – is educational, and we want readers to see the stories of the Righteous as real narratives, getting them to sympathize with these characters.” The choice to include a Righteous, added Cataluccio, always stems from a discussion involving different people and has led us to uncover lesser known and fascinating stories.

Gabriele Nissim, GariwoPresident, closed the opening remarks with an overview of Gariwoactivity and big goals for the future. First, Nissim discussed Gariwoto extend the notion of Righteousness beyond the Shoah, and declared: “Today we must take one more step: we must tighten the knot between the figures of the Righteous and the theme of genocide prevention. The figures of the Righteous must show society that genocide can be prevented and avoided through individual choices and responsibility ”. Nissim also pointed out the link between Gariwo and the number of Rafael Lemkin, the Polish Jew who invented the notion of genocide and stressed the importance of intentionality and individual responsibility in genocides. Lemkin, said Nissim, convinced every country in the world to sign the 1948 United Nations Convention on the Prevention and Punishment of the Crime of Genocide. For this reason, Gariwo proposed to the Italian Parliament to improve Italy’s commitment to the prevention of all mass atrocities, which the UN Special adviser on the prevention of genocide welcomed.

The assembly saw a warm and active participation of Gariwoambassadors, who contributed to the event with thoughts and ideas. Milena Santerini, university professor at Cattolica University in Milan and national coordinator of the fight against anti-Semitism since 2020, praised Gariwo’s exceptional work and said: “GariwoThe mission of is something that lights the path of our society and provides us with an example of what it means to live as citizens, as a universal community: the Righteous do not divide, they help to unite and embody a society which is not polarized ”. Annalia guglielmi, Gariwo contributor and specialist in Eastern European history, underlined that “each totalitarian regime begins by annulling the memory of the Righteous. This is what is happening in Poland, where the Solidarność figures are prohibited: thus, the Righteous offer us a very important angle to reflect on the world of today ”.

Pietro kuciukian, co-founder of Gariwo and Honorary Consul of Armenia in Italy, mentioned the ongoing conflict in Tigray and said: “denial leads to impunity, and impunity leads to repeated genocides”. Mr. Kuciukian stressed the importance of Rafael Lemkin’s reflection on what it means to cancel a group when he invented the notion of genocide.

Bruno Marasà, former director of the European Parliament’s Milan office and foreign policy expert, suggested that Gariwo participate in the Conference on the future of Europe. Proposed by the European Commission and the European Parliament, the Conference on the Future of Europe was announced in 2019: it consists of a number of debates and initiatives to discuss the medium and long-term future of the EU and the reforms to be made to its policies and institutions.

Antonio Ferrari, columnist at Corriere della Sera, recalled the figure of Guelfo Zamboni, Italian consul in Thessaloniki who saved the many Italian and Greek Jews during the persecutions and who is honored at the Jardin des Righteous in Milan at the suggestion of Ferrari. Ferrari also mentioned the Rwandan genocide and the long-awaited apology from French President Emmanuel Macron, saying that a culture of prevention is fundamental. About Rwanda, Françoise Kankindi, president of Bene Rwanda (son of Rwanda), an association based in Italy, founded in 2005, and which works for reconciliation and the memory of the Rwandan genocide. Kankindi said that with Gariwo and Yolande Mukagasana (survivor and witness of the Rwandan genocide), she plans to open a Garden of the Righteous in Rwanda. “Rwanda – Kankindi said – was a proving ground to prove that the promise of ‘never again’ on which the 1948 Convention was built had not been crowned with success: the genocide of the Tutsi could be avoided and more than a million victims could be saved ”.

Cristina Miedico, an expert in cultural policy, mentioned the 2030 Agenda for Sustainable Development, emphasizing the importance of cultural promotion, transmission of values, memory and cultural heritage. With a few colleagues, Miedico organized a series of meetings – to which Gabriele Nissim will also contribute – to highlight the importance of culture in the 2030 Agenda, which she says is lacking and could be incorporated into Goal 16, which promotes inclusive and peaceful societies.

Andrea Vitello, author of the forthcoming book “Il nazista che salvò gli ebrei. La storia del salvataggio degli ebrei danesi ”(Le lettere, Firenze, 2021), spoke of the ongoing atrocities in Xinjiang against the Uyghur Muslim minority. “The erasure of an entire people is literally in place: what is happening with the Uyghurs brings back memories of other well-known atrocities in modern history,” said Vitello. For this reason, he added, “I believe that the memory of the Righteous is essential: with genocides, there is often this narrative of the inevitable. The Righteous Teach Genocides with the idea that they could be avoided: it is always possible to do something against injustice ”.

Hafez Haidar, Lebanese writer, translator, academic and Candidate for the Nobel Peace Prize in 2017, also contributed to the assembly of ambassadors of Gariwo. Haidar drew attention to what is currently happening in Lebanon, who Pplunged into an economic and political crisis after the August 2020 explosion in Beirut. “Lebanon must come to life on a new basis:” said Haidar, “we must close the arms factories and we must build a sustainable democracy based on human rights, by boycotting the economies that supply arms terrorists ”. Peace, Haidar said, is based on interfaith dialogue, not force.

Anna foa, historian, was inspired by the words of Gabriele Nissim on the plurality of voices on the theme of the Righteous across the world and across disciplines. “I believe that the moment today represents a step forward towards new efforts and challenges,” said Foa, “there is a need to delve deeper into these themes without fearing the plurality of voices, or any possible division.” Annamaria Samuelli, Gariwoco-founder and director of Gariwoeducation sector, concluded the assembly by focusing on Gariwothe growing commitment of prevent genocide. “Gariwothe education sector will take a concrete and enthusiastic position on this subject, with the thousands of students that we have engaged with the figures of the Righteous ”.