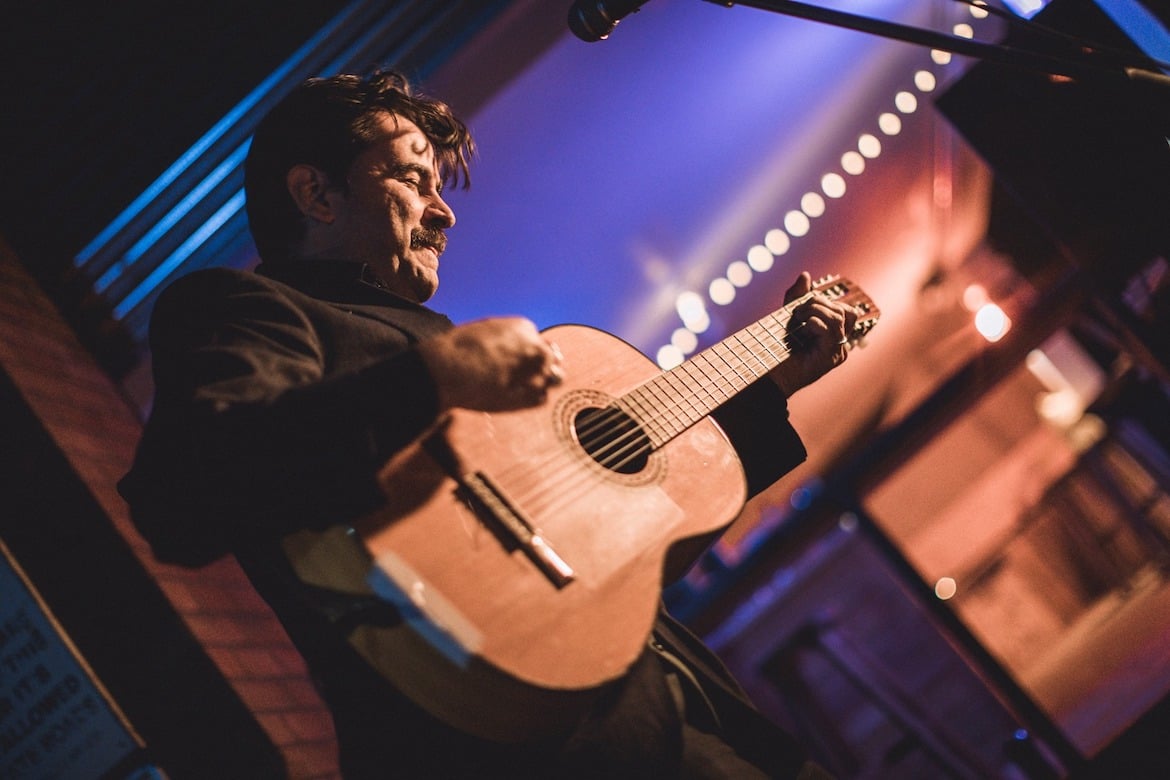 Gabriel Moreno – Year of the Rat

London-based Gabriel Moreno is a bilingual poet and singer-songwriter from Gibraltar with ten books of poetry and three previous albums to his name. Mixing different languages ​​and cultures, the title of his latest album, ‘The Year of the Rat’, refers to the Chinese horoscope for 2020 and is anchored around confinement experiences, in particular impacting on the ability to work, the Rat symbolizing imagination and diligence.

With a range of international musicians contributing piano, guitars, double bass, trumpet, cello and drums and singing in its distinctive accented tones, Year of the Rat is an evocative and inevitably very poetic work. It opens with the finger nimbly Solitudea tongue-in-cheek observation of how artists need time for themselves to create, but instead get more than they would like (“I asked you for a single room not for the whole hotel to burn down”), and its impact on people’s behavior (“My brothers they forgot to shave, my sisters don’t wear bras, they hang out in space all day and sing like sparrows in dresses“) like “the planet had its vacation while we hide like rodents under the stairs”.

Lockdown and isolation from the world also inform Want to dance with his percussive tapped guitar (“I build a dance floor with my favorite books / I close the window to my worldly concerns“), a “asexual caster of dancing wildly by myselfand, also on a terpsichorean note, Dancing in an empty field where, partly sung in Spanish, frustration builds as he asks “is coffee strange without your friends?” and “Are you tired of looking out the window?/Did you dream of grapes drying in your house?/I’d open a bar just to see you drinking/to watch your lips hide in a song” because “Love is a game for open highways and the plague has us trapped in a box”.

With a rippling guitar reminiscent of Cohen, Painter, Painter is another number that revolves around the creative spirit, tackling a reversal of artistic priorities (“you strived to capture the body and you neglected the soul/And who will paint the thoughts that cut my sleep when I’m alone with the bottle and all my sins?”), a focus on external distractions, not the inner truths a true artist should seek (“remember Rodin the genius of clay, he captured the thoughts of beggars and slaves”).

Literary and geographical references abound, dancers handpicked Duct Tape My Heartaddressing here Fantasy as opposed to Solitude, seeks inspiration in the face of writer’s block (“I need your ropes, because mine are broken, you see they closed the bars and I kind of lost the gnome”) with a lyric that mentions García Lorca and Charlie Baudelaire and laments that “there is no new writing in Marseilles”. There is also politics; earlier he talks about how governments lie and later about “the pantomime of daily news/The prison of the same, the window of trust“while here”Activists fight on their phones as Genghis Khan sets the end of the world in motion and we all sit back and wrestle with our ghosts“while we are”all sealed and tied to the lies of the money thugs”.

Elsewhere there is the meditative Spanish guitar of The dreams of the poor (“they crumble like snow wiped from the tail of a space station“), although the song seems to be more of an artistic compromise to stay afloat as he half speaks lines like “The thief holds a mirror, he laughs and bows to his greed, I met a hero once but it seems we all wanna kneel, kneel before a king» and asks «How to pay for an apartment in Paris? Should you sell your mustache or paint bankers’ wives?“while the poets are”trade a nurse for a snake and a purse, and a year’s pass for Russian dancing…just meat for the sharks, for the money-crazed sharks”.

As it ends it contemplates life after lockdown as we face a new normal, the slow waltz all we have who is asking “aren’t you tired of living in withered heights or one of the fantasy novels you love” and, “carnival sick inside“says”We’re not gonna scream this time or pretend it’s alright, we’re gonna take it as it comes and chase those setting suns before we fall into love’s spiral wheelsagain nodding the impact of the musicians by the loss of an audience (“These cobwebs have been like mold inside since the day you said you would give anything for certain songs on Spotify”). More precisely, When the city wakes up reflects on how relationships will be post-pandemic (“What will you do when the circus returns? With its lights and its applause and its great acrobats / Will you still hold my hands when strangers intrude?… O love, there is so much to see, will you see it with me when the city wakes up and resumes its pills?”).

It ends with the mood of modern jazz, wild rhymes of the year of the rat title track, which, in places reminiscent of Charles Aznavour, directs its anger at those who have exploited the pandemic, who “sold our distress to a corporate mess in Taiwan for a penny” and “tore down the bridge and made the ‘England to terror and greed so that dragons in wigs could afford their apartments in Japan’. There’s also an ironic note of self-awareness (“Don’t get me wrong, I’m not a peach, I drink more than I sing and I traded my dreams in the night for a crown/I haven’t didn’t moan when they padlocked the gym but when the seals fell off I whined and screamed for my town’s juice”). Yet it ends with a tribute to those who cursed and, even though they couldn’t tour, brought their music to every platform possible, to rally hope and solace in the farewell speech “Remember your punch for it threatened the air, you didn’t it didn’t work, but at least you took care of us here in the year of the rat”. If the Year of the Rat was about survival and the Year of the Ox about adapting to a new reality, as we enter the Year of the Tiger we are committed to facing change and taking risks but always in quest for justice. Moreno has indeed offered us an album of the time.