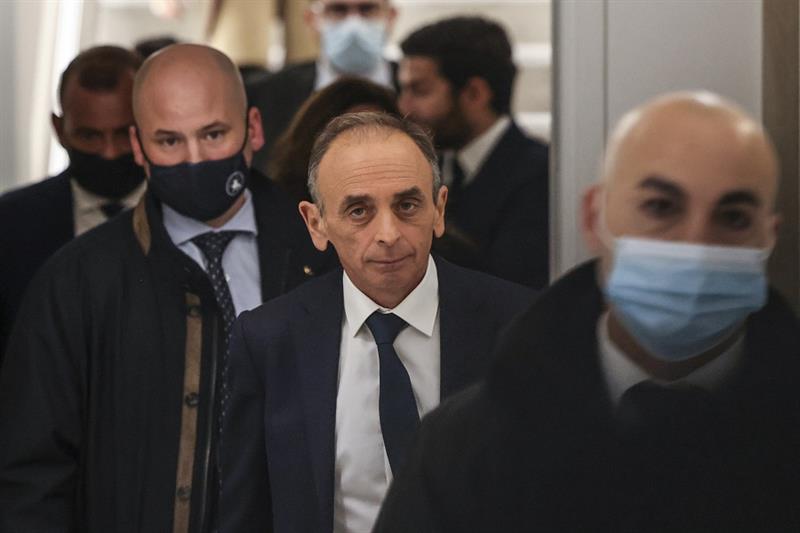 File photo: French far-right presidential candidate Eric Zemmour is protected by bodyguards as he arrives for a TV interview with French TV channel TF1 in Boulogne-Billancourt, on the outskirts of Paris. PA

Zemmour, a 63-year-old author and television expert, announced on Tuesday that he would run in next April’s election, joining the group of challengers seeking to topple centrist President Emmanuel Macron.

His first rally comes just a day after the right-wing Republicans party chose ValÃ©rie Pecresse, a former budget minister, as a candidate.

“It’s incredible the level of enthusiasm, while other candidates were in half-empty rooms,” Antoine Diers, spokesperson for Les Amis d’Eric Zemmour, told AFP on Friday. â€œWe are expecting a lot of people.

About 19,000 people registered for the event, according to Zemmour’s campaign, leading him to swap a concert hall for a larger-capacity exhibition space in the suburb of Villepinte to the north-east of the capital.

Police are on alert for far-left activists and anarchists who disrupted Zemmour’s trip last weekend to the south of the port city of Marseille, which ended with the candidate showing the middle finger to a woman demonstrating.

About fifty union and civil society groups have also called for demonstrations in Paris to denounce Zemmour, an anti-Islam and anti-immigration polemicist sometimes nicknamed “France’s Trump” and twice convicted of hate speech.

StÃ©phane Troussel, the socialist responsible for the Seine-Saint-Denis region, where the Zemmour rally will take place, also launched a petition calling for the cancellation of the rally.

The momentum is fading
The event will be closely scrutinized given Zemmour’s fall in opinion polls after a dramatic entry into French politics in September.

So far he had traveled the country organizing promotional events for his latest book – “France Has Not Said Its Last Word” – which served as a barely disguised pre-campaign tour.

In addition to a series of recent missteps, including the middle finger incident, Zemmour has seen several influential far-right figures distance themselves from him, including his main backer.

Polls show voters currently believe Marine Le Pen, the veteran leader of the far-right National Rally party, would make a more capable president than Zemmour, who is viewed as highly divisive and arrogant by a large majority.

The latest polls suggest he would be eliminated in the first round if the election takes place now, with Macron being tipped to win ahead of Le Pen, but analysts warn the outcome remains highly uncertain.

Zemmour kicked off his presidential bid on Tuesday in a very unusual video posted to YouTube, which saw him reading a speech into an old-fashioned microphone as he sat at a desk and barely looked at the camera.

It was intended to recall the famous speech of June 1940 by the war hero, General Charles De Gaulle, to continue resistance to the Nazi occupation of France.

On footage of riots, Islamic prayers and terrorist attacks, Zemmour warned that France risked being “conquered” or “colonized” by immigrants and that the French were “replaced”.

His friend Robert MÃ©nard, far-right mayor of the southern city of BÃ©ziers and an influential figure in far-right circles, described Sunday’s rally as “a daring bet. He must succeed”.

Tuesday evening, during a prime-time interview, Zemmour complained of not having been questioned on his show, allegedly insulted presenter Gilles Bouleau afterwards for asking him about his past comments on women and Muslims.

Music teacher recognized by the National Endowment for the Arts