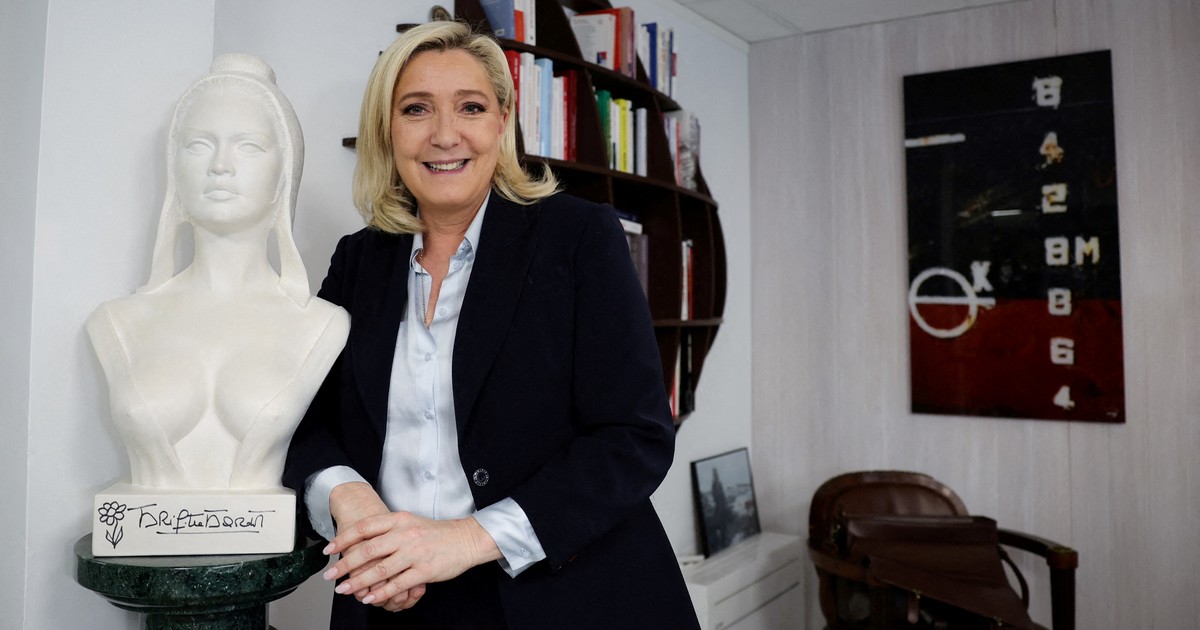 Political opponents still criticize Marine Le Pen’s National Rally as racist, xenophobic, anti-Semitic and anti-Muslim. But polls show that while society once saw her as the “devil” of the republic, public perception of her has softened.

And she is second in voting intention behind Macron, who is seeking re-election.

Marine Le Pen has focused her campaign for the presidential elections this Sunday on the astronomical cost of living and the feeling of social inequality.

Le Pen’s focus on the cost of living and rising energy prices likely to be exacerbated by the war in Ukraine allowed her to overlook her past ties to Vladimir Putin, whom she visited in 2017, or with Hungary.

A Hungarian bank granted him the loan to finance his campaign.

Posters with the faces of the candidates for the presidential election this Sunday in France, in Paris. Photo: AP

Marine Le Pen is 1.80 meters tall, she is platinum blonde, smokes like a bat, wanders around the market looking like a movie star, her black and white photos in her hand, which she is asked to dedicate to his grandmother, uncle, mother or husband. She does it with enormous sympathy, asks for the names of the recipients, writes carefully, like Jean Marie, her father, greeting everyone.

“She is dangerous,” Interior Minister Gérald Darmanin said last week. “She could win this presidential election,” he warned.

During a walk in western France, President Macron warned against people who “look away” from the reality of his radical agenda and “find it more enjoyable”.

The presidential election campaign was the most right-wing in the history of modern France. Besides Le Pen, another ultra-conservative candidate has emerged: former TV pundit and columnist Eric Zemmour, who has convictions for incitement to racial hatred.

With more incendiary language than Le Pen, he entrenched the discredited “great replacement” conspiracy theory, in which he claims that local French populations could be replaced by newcomers, making France a predominantly Muslim country, at the edge of civil war. .

The candidate Eric Zemmour, to the right of Marine Le Pen. Photo: AFP

Between them, Le Pen and Zemmour total around 30% of the votes in the first round according to the polls. The traditional right Les Républicains and their struggling candidate, Valérie Pécresse, have stepped up their rhetoric on immigration as they compete with Zemmour. But Valérie is a moderate, who has been a good Conservative minister, in the midst of this xenophobic campaign.

Instead of hurting Le Pen, Zemmour made her stronger. “Something quite amazing happened during this campaign. Eric Zemmour’s radicalism has softened Marine Le Pen’s image,” said Bruno Cautrès, a political scientist at Sciences-Po Paris. “He is less radical for many voters. She seems less aggressive than Eric Zemmour. , she has more respectability”, he assures.

“France for the French”

The policies of Le Pen’s hard-line manifesto have not changed and overlap with those of Zemmour. She promised a referendum on immigration and a rewrite of the Constitution to guarantee a “France for the French”, where ethnic French people would have priority over non-French people in terms of social benefits, housing, employment and health care.

The Muslim headscarf, which she describes as “uniform of totalitarian ideology”, would be banned from the streets and from all public places.

Le Pen’s key issues – concerns about insecurity and crime, a sense of decline and social inequality, and his link between these issues and immigration and a perceived threat from Islamism – took over place in the public debate in recent years. years.

“The ideas that we have always fought for have become the majority opinion,” said Jordan Bardella, 26, the party’s rising star and current interim leader, as he met with voters in Marseille.

The French presidential elections are divided into two rounds: the first will take place on April 10 and the ballot on April 24.

TOPICS THAT APPEAR IN THIS NOTE