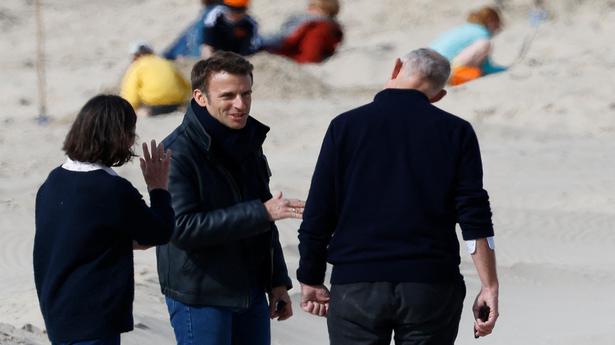 France votes with Macron for a new mandate

French President Emmanuel Macron faced a tough test for re-election on Sunday in a vote that is expected to produce a close runoff with far-right leader Marine Le Pen.

Polls opened in mainland France at 0600 GMT after an unusual campaign overshadowed by Russia’s invasion of Ukraine which analysts said could lead to unpredictable results, with turnout a major factor.

Early indications showed turnout was around three percentage points lower than the same stage in 2017, although it was higher than 2002, when a record number of French people stayed away.


Opinion polls predict that Mr Macron will edge Ms Le Pen by a handful of percentage points in the first round, with both advancing to the second round on April 24.

Far-left candidate Jean-Luc Melenchon is hot on their heels in third place and still imagines his chances of reaching the second round at the expense of Ms Le Pen or even – in what would be an extraordinary reversal – President Macron. -same.

Mr Macron voted in Le Touquet on the northern coast of France, accompanied by his wife Brigitte.

Ms. Le Pen voted in Hénin-Beaumont, also in the north of the country while Mr. Mélenchon voted in the south of Marseille.

Despite her opponents accusing her of being an extremist bent on dividing society, Ms Le Pen has sought with some success to project a more moderate image and care about voters’ day-to-day worries such as rising prices.

Mr Macron, by contrast, campaigned relatively little, by his own admission, entering the campaign trail later than he would have liked because of the war in Ukraine.

If Mr Macron and Ms Le Pen reach the second round, analysts predict their clash will be much closer than in 2017 when the current president beat his rival with 66% of the vote.

“There is uncertainty,” said French political scientist Pascal Perrineau, pointing to the high number of voters still undecided or who changed their minds during the campaign, as well as absent voters.

Analysts fear that the 2002 record for the number of French voters boycotting a first round of 28.4% is in danger of being beaten.

Early voting patterns appear to confirm those forecasts, with midday turnout at 25.48%, three points below the level recorded at the same time in the 2017 elections, the Home Office said.

Some 48.7 million voters are registered across France to vote in this election.