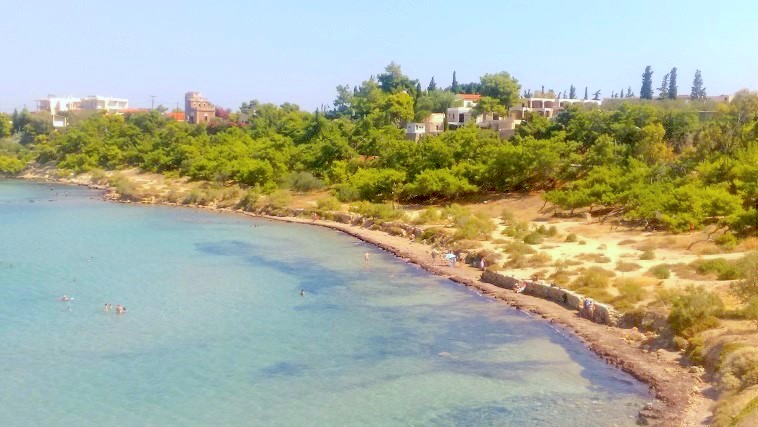 Most Greek and foreign travelers would associate the island of Aegina, just an hour from Athens by boat, with its sandy beaches; with its pistachio orchards; and also with the majestic ancient temple of the local deity Aphaia, or with the monastery of St Nektarios, whose story will soon appear on the big screen with Mickey Rourke.

However, very few visitors to this island of 13,000 people would know about the fascinating history of the former military port of Aegina. Î‘ unique construction anywhere in the Mediterranean, it has always been open to swimmers to enjoy and explore it even though it is the field of current research by an international team of archaeologists.

Besides the unmissable monument of Kolona, â€‹â€‹at the foot of the Acropolis of Aegina, are the semi-submerged ruins of one of the most important military ports of ancient Greece, which the 2nd century historian Pausanias of our era calls it a secret port – “kryptos limin”, in classical Greek.

This very distinct name recorded by Pausanias stems from the fact that only the locals knew its location and, most importantly, how to navigate to its shore. And this was due to the man-made system of man-made reefs – a kind of sea minefield, some like to call it – which made it difficult and dangerous for the enemies of the Egyptians to enter the harbor.

â€œPausanias wrote that Aiakos, the legendary first ruler of Aegina, threw stones into the sea to prevent enemy ships from approaching Aegina. He calls them rocks, but they are in fact artificial formulations, â€explains Despina Koutsoumba, marine archaeologist at the Ephorate of Underwater Antiquities at the Greek Ministry of Culture.

â€œOver time these medium sized stones have coalesced and they do indeed look like solid rocks. This system of artificial reefs is even present in the current bathymetric charts that ships use for navigation. Anyone entering the modern port of Aegina will notice something that looks like a barrier outside the port. Even today, ships must have difficulty navigating around this outcrop, â€continues the researcher.

Arriving at the old military port, a wide view of the open sea, the joyful buzz of bathers makes it easier to imagine the archaic era when, more than 2,500 years ago, Aegina was one of the most important mistresses. most frequented, most powerful and most abundant. of the sea in the then known world – several centuries before neighboring Athens became glory.

One of the eleven largest naval city-states of the time, Aegina had contributed, according to Herodotus, 30 manned triremes to the naval battle of Salamis – a strategic milestone of the Persian wars in 480 BC, whose 2,500th anniversary is celebrated in 2020. After the epic victory of the Greek city-states against the Persians, the Aeginites were congratulated by the oracle of Delphi with an award for bravery. But that did not stop the Athenians, a few years later, from destroying what was their most important rival city.

Over the past three years, most of the research has focused on the war port of Avra â€‹â€‹Beach, which is most visible because it is fortified. Although local tourist information websites often claim Aegina had 400 triremes at its peak, the archaeologist believes this to be an exaggeration. To date, his team has confirmed the existence of 15 ship hangars spanning a quarter of the total length of the secret port.

â€œWe found proof of this on the north side of the Warport. Apparently there must have been more on the south side, probably destroyed in part due to the construction of the modern (commercial) port, and on the east side, which was silted up under the beach, â€she says.

The ruins can be seen from the sea surface up to two meters deep, or three meters outside the submerged wall.

â€œThey’re in very shallow water and bathers can see them while swimming or snorkeling with a mask and fins. The two turrets that blocked the entrance to the port with a strong chain are visible in several parts as they are on the surface of the sea and protrude slightly above it. The submerged hangars, where the warships and their equipment were located, are also visible, â€underlines Koutsoumba.

Breakwaters and artificial reefs extend further into the sea, 500 meters from the beach and up to nine meters deep, all directly in the route of today’s inbound ships.

Next showcase before diving near the ancient port of Aegina

As part of the Aegina Harbor 2019-2023 international project, led by the Ephora of Greece’s Underwater Antiquities in collaboration with the French School of Athens and the University of Aix-Marseille, the municipality of Aegina has been organizing guided tours for bathers once a fall since 2018.

The tradition was broken in 2020, due to restrictions imposed by the Covid-19 pandemic, but Koutsoumba promised that these annual open days would come back for sure: â€œAlong with the research, we want to present the results and offer the port to the Public. We plan to facilitate people’s understanding of the concept of the port through digital means, immediately followed by the ability to dive in and see it for themselves â€.