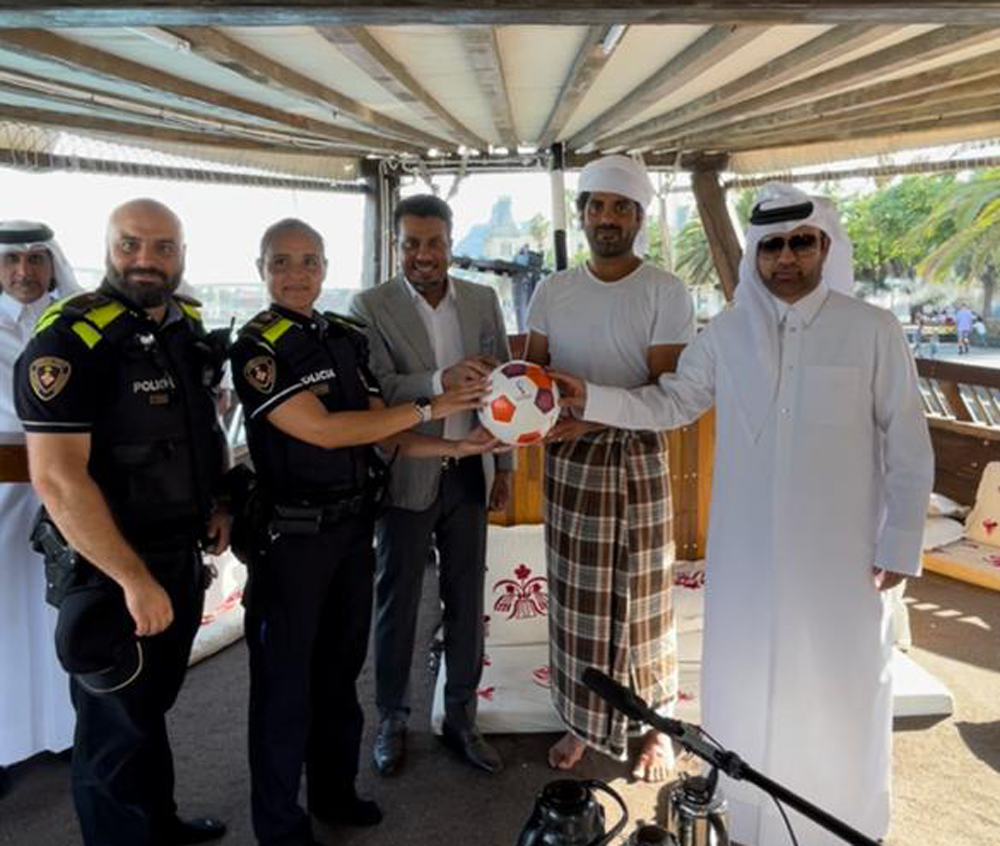 The Fath Al Khair 5’s 40-day cruise voyage ended on Friday when it docked at its final destination in Barcelona, ​​Spain.

A celebration of Al Qaffal was held after its last sail, attended by Katara Cultural Village Foundation, Managing Director, Prof. Khalid bin Ibrahim Al Sulaiti; The Ambassador of Qatar to the Kingdom of Spain, HE Abdullah bin Ibrahim Al Hamar, as well as other Ambassadors, members of the diplomatic corps and Arab and foreign officials in Spain, and a large audience from Qatar and Spain .

Al Qaffal is a traditional ceremony done in the past to welcome fishermen and pearl divers when they return safely from expeditions.

Dr. Al Sulaiti praised the Fath Al Khair 5 voyage in showcasing authentic Qatari maritime heritage and promoting the FIFA World Cup Qatar 2022. He also praised the leadership of Nokhadha Muhammad Al Sada throughout along the journey for overcoming challenges and adapting to difficulties.

He pointed out that the Fath Al Khair 5 is the first voyage to use a traditional local wooden loader that has reached the shores of Europe, a first in Qatari maritime history.

The cruise began July 4 in Malta and continued to ports in Sicily, Naples, Rome and Genoa in Italy; Monaco, Cannes and Marseille in France and concluded her voyage at the port of Barcelona in Spain. The cruise route is approximately 5,700 km.

The month and a half voyage was led by Nokhadha Muhammad Al Sada, with seventeen sailors. During his trip, he greeted travelers and publicized the FIFA World Cup Qatar 2022. Brochures and gifts were distributed, organized by the Supreme Committee for Delivery and Legacy.

Al Sada said the journey is Katara’s most exciting and challenging journey since starting Fath Al Khair ten years ago. He explained that although they had to face these difficulties, it was also rewarding because they were very well received by Europeans, the public and tourists.

During its fourth edition, the cruise also promoted Qatar as the host nation of this year’s World Cup. They distributed leaflets, brochures and gifts to the public during a tour of 11 ports in Europe and North Africa.

Fath Al Khair 5 will arrive on August 16 at Hamad International Airport where a reception for the crew will be held.

Since its inception in 2012, Fath Al Khair has been dedicated to educating the youth of Qatar about the country’s great maritime heritage and history. Organized by Katara, it aims to increase public knowledge, especially of the country’s marine culture, which is an important aspect of Qatari identity. The trip is part of the foundation’s ongoing initiatives to encourage cultural exchanges between the Mediterranean countries and Qatar on the one hand, and the Gulf Arab States and the Qatar region on the other.

This is done to promote cross-cultural dialogue by enhancing understanding of Qatar’s history, especially the marine culture.