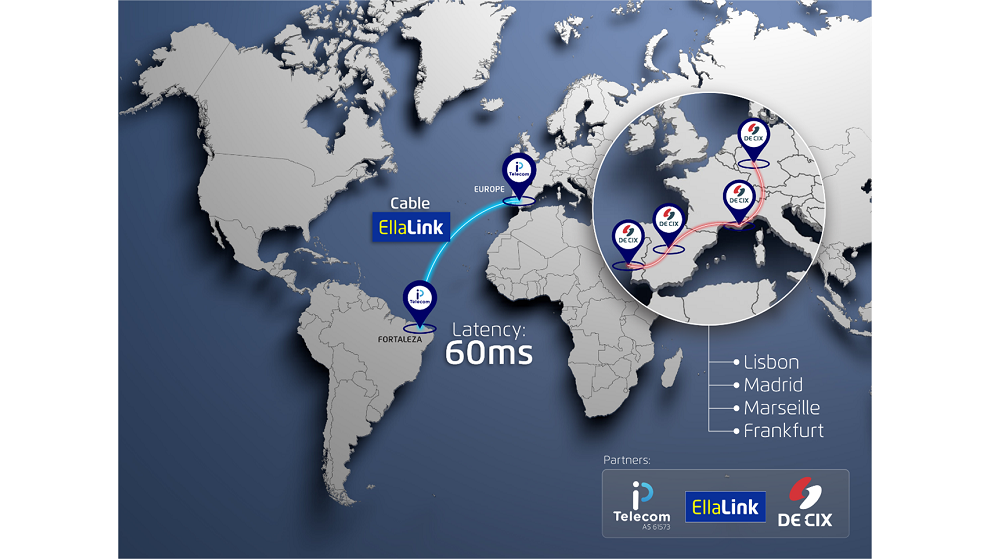 EllaLink and DE-CIX to interconnect Brazil and Southern Europe

DE-CIX is to provide EllaLink with access to its interconnection ecosystem in Southern Europe, through their Internet Exchange Points (IX) in Lisbon, Madrid and Marseille.

Thanks to the EllaLink connection between Latin America and Europe, the latency between the two continents is reduced by almost 50%, from +100 milliseconds to around 60 milliseconds compared to traditional routes.

“As we operate in the B2B market, partnerships are essential for the high-speed data transport between Fortaleza and Sines offered by the EllaLink cable to content-generating companies, whatever their application – games, financial systems, streaming – for maintain performance until it reaches other European and South American destinations,” said Vincent Gatineau, Director of Sales and Marketing at EllaLink.

This partnership builds on EllaLink’s recently announced partnership with Group IP Telecom and sees each collaboration contributing to a better Internet experience for the end user. EllaLink provides data transport, while IP Telecom enables connections from companies located in Brazil to the transport ecosystem and IXs in Europe, accessing the unique networks of Internet services and content providers, as well as networks companies, connected to DE-CIX.

“We are proud to bring together the two strong trading regions of Southern Europe and Latin America through our partnership. These markets share many similarities in culture, language and market requirements,” said Ivo Ivanov, CEO of DE-CIX International.

“A year ago, we announced that we would jointly build a new data traffic highway across the Atlantic Ocean. Now here we are, ready to serve both continents – with customers like IP Telecom already taking advantage of the enjoyment of low latency and secure interconnection.”

EllaLink and IP Telecom recently collaborated with NoPing, a high performance latency improvement solution for the online gaming industry. With the EllaLink cable and the partnership with IP Telecom and NoPing, the reduction in latency achieved during a game has been reported to be around 30%.

“Gaming users, for example, demand that the connection between the two continents have the lowest possible latency,” said Jefferson Carvalho, CEO of IP Telecom.

“But among our customers we have banks and other institutions in the financial system who demand, in addition to low latency to trade on the stock exchange, for example, also the security of the direct connection between the two continents offered by the partnership, because these customers deal with personal data under their responsibility.

“Through this structured partnership, the low latency offered by Ellalink’s cable will help businesses on both continents identify opportunities in the connectivity market, which will be met with the support of IP Telecom and DE-CIX. .”

How to apply for a payday loan