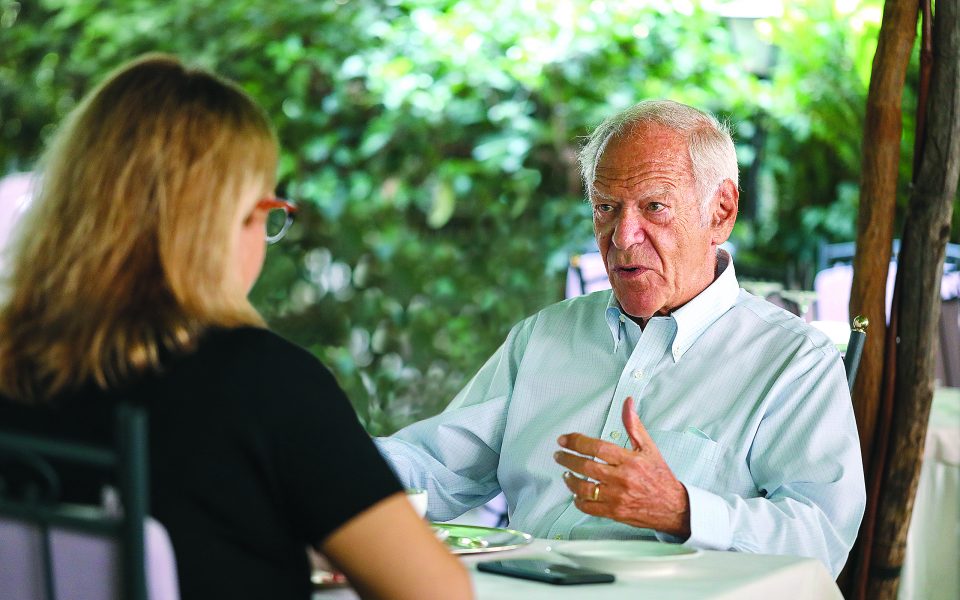 â€œNow, with the push of a button, they know what’s going on halfway around the world. We had to land somewhere and find out for ourselves, â€diplomat Alexander Philo told Kathimerini in an interview. [Nikos Kokkalias]

When you first meet the diplomat Alexander Philo, you are immediately struck by the fact that his career perfectly matches his personality. He has an innate politeness and speaks quietly, never flaunting his knowledge, always giving the other person the idea that they are important and useful. Her face speaks of her cosmopolitan nature which can always find ways of communication, not only because of her knowledge of languages, but because of her deep inner strength and broad spiritual horizon.

Even back in the days when no one had heard the expression diplomatic soft power, he had put it to good use. Not the type to stay locked up in the embassy, â€‹â€‹he liked to venture outside to meet people ranging from senior officials and businessmen to day laborers. â€œThis is the only way to fully capture the essence of a country. When you’ve mapped out his company. Only then can you know where you stand and what you need to do to fully defend the interests of your own country, â€were his first words to me.

Philo has served as Greece’s Ambassador in some of the most critical positions – among them Ankara and Washington, DC – and has met and socialized with great leaders. At the same time, as he insists himself, he had the chance to marry a special woman, Eleni Potamianou, a faithful and united travel companion interested in culture and the arts. Together, they got to know each place in depth. It all adds up to a busy life that began with an adventure. Still a child, Philo had crossed the Atlantic with a neutral Swedish ship when World War II broke out on the old continent. His father, also a diplomat, had been posted to Washington, and Philo spent his early childhood in America.

â€œWe were very lucky as a family because we were safe at a time when Greece and Europe were suffering. I have incredible memories of that time. I remember first discovering comics, which I still love today, and I remember my parents urging me to do odd jobs like other kids my age, when we didn’t. had only 6 years. I had a paper course. It was a magical experience growing up in the United States at the time. English was my mother tongue, then French, because my mother was an Epirot born and raised in Marseille, and finally Greek that we spoke at home. In this way, from an early age, I was exposed to three different cultures, which was very useful in my subsequent career as a diplomat.

America with many faces

The next time he was in America was in 1966. He would serve in the Greek Permanent Delegation to the United Nations as Secretary. However, when he arrived in Washington and visited the embassy, â€‹â€‹the city was rocked by racial unrest. â€œOur ambassador at the time was an extraordinary man, Michael Dountas. â€œWe won’t stay here, we have to go and see what’s going on,â€ he told me. Despite the danger we faced, he drove us in his Volvo to downtown, right next to the White House. The riots had just died down because people had started to loot. They smashed windows and took over everything in the stores. I gradually began to realize that the United States was a multi-faceted country, with many unknown facets that I needed to discover. Back then they had a system where you were given a brand new car to drive to another city for free with all expenses covered. I started my trip in New York and went to Arizona. As I walked through this huge country, I kept stopping and talking to people who lived in places I would never have visited otherwise, asking them what they were going through and their ideas. Most of these people did not even have passports.

“The election of Trump did not surprise me, I dare say,” he continues. â€œI understood that he was a politician with great insight and a knack for speaking to his electorate. It was a mistake that so many people underestimated him before the election. I also think that over the next few years a lot will be decided in the United States by the minorities of today who will have grown up and acquired large population bases. It is a dynamic evolving society. I asked him if the same curiosity he had in his youth, to understand and know a country well, was shared by his successors today. â€œOf course the great thing about this new generation of diplomats is that they have tools that we couldn’t even dream of. They grew up in an era of globalization, with access to information available on the internet and on their phones, and experiences that made them more familiar with other cultures. Now, with the push of a button, they know what’s going on halfway around the world. We had to land somewhere and find out for ourselves.

I wondered what would be the greatest virtue for a diplomat today, when technology has fundamentally changed the way information can be collected and transferred. â€œWhy, a desire to do the job itself. Be curious, passionate. Diplomats are public sector employees in their own way, but we are not like the others. You serve your country in a different way; it’s not a career for people who are bored or unmotivated.

In Washington, he was Deputy Ambassador from 1984 to 1989 and Ambassador from 1998 to 2002. He also served in Ankara from 1993 to 1995 and in New Delhi. â€œDuring my first meeting in the United States, we had to deal with the fallout from the bombing of the TWA plane. Fortunately, the experienced George Papoulias was in the driver’s seat and we were able to weather this crisis. My second date was much quieter. However, I would say that we are currently in the best period of relations with the United States; it seems that trust has been established and I think the recent defense agreement between the two countries is a step in the right direction.

“As far as Turkey is concerned, I think many Greeks think that if Erdogan leaves, things will improve almost immediately,” he continues. ” This is not the case. The situation is much more complex. The important thing is to strengthen our country both militarily and diplomatically, to ensure the reconstruction of our economy. You know, there is no soft power without hard power. The first alone is not enough. We need to strengthen many sectors in order to have an impact and to be heard.

I asked if the Turks, who have a long diplomatic tradition, retain their charisma to this day. â€œIf you talk to retired Turkish diplomats, they will tell you that the new generation is nothing like its predecessors. Perhaps because at the time, diplomatic cadres were filled with young men from the cosmopolitan and polyglot elite. Today, they are more often from military families. But the Turks spend a lot more money than we do on a variety of projects to project a better image of Turkey abroad, they have a wider service. For example, in Washington, they renovated the embassy building. It projects power. We have done nothing of the sort. There is a lot at stake in symbolism.

“However, I am proud of our diplomacy, we have successes that the Turks could not dream of, like the accession of Cyprus to the European Union,” he said. â€œWe also have a diplomatic tradition. We have lively, capable and patriotic individuals. My fear is that we often don’t use them in the right way. We have a deficit because the leadership is often unable to fully mobilize its diplomatic mechanisms for the good of the country. Usually each head is surrounded by a small group of people. This is my general impression and not specifically of Minister X or Minister Y, but the eternal state of mind of the Ministry of Foreign Affairs. We have to become team players.

“I had read that [George H.W.] Bush’s son is reportedly running for president. At the time, he was governor of Texas. I was going to meet him, and I knew that these official meetings tend to be very short and that we don’t talk a lot. I also knew he had no idea about foreign policy. I had heard he was a huge baseball fan, something I didn’t know anything about. I went to see a Greek American in Baltimore who had a team and asked him to teach me everything. When is the time to meet [George W.] Bush, I was fully aware of it. As I walked into his office, I saw lots of caps and uniforms. I started talking about baseball and we bonded. He liked me and I stayed in his office for two hours and was able to tell him a few things about Greece. When he was sworn in as president, I was one of the few ambassadors he already knew. All my colleagues wondered how he knew me, a representative of a small country.

TV channel, how to watch