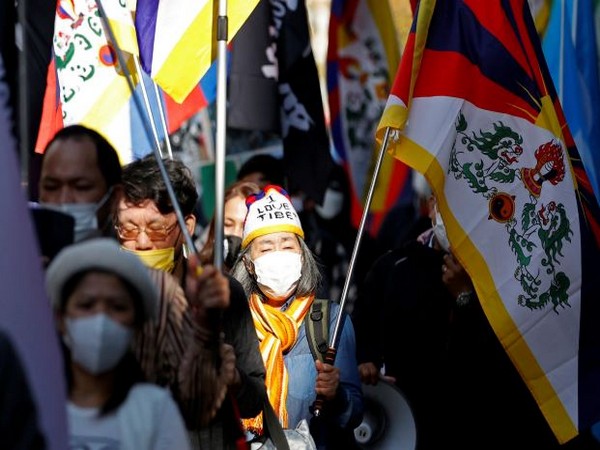 Paris [France]July 18 (ANI): Following the murder of a Tibetan national by three men from the Chinese community on July 11 in Normandy, representatives of the Tibetan community gathered in France on Sunday July 17 to carry out a white march and pay tribute to the deceased.
The Tibetan national, named Tsultrim Nomjour Tsang, 32, was fatally stabbed in the side outside the restaurant Les Délices d’Asie, which had employed him for a week in Saint-Léonard, near Fécamp, local media reported, adding that the attackers were the two managers of the establishment and an employee who were indicted for voluntary homicide and imprisoned, within the framework of the investigation opened by the parquet floor of Le Havre, reported DecodeTheNewspodcast.
Tibetans from all over Europe – Belgium, Switzerland and Spain gathered in Paris on Sunday July 17 with bouquets of flowers, for a white march on an unprecedented scale. According to internal information, they were around 7,000, perhaps 10,000 according to representatives of the Tibetan community in France.
“We had never experienced anything like this, it’s really a shock,” said the Dalai Lama’s representative in Europe, World Rigzin Genkhang.
Hundreds of Tibetans, who had traveled from Paris, Rennes, Nantes, Marseille or Toulouse, went to the scene on Thursday July 14 to pay their first tribute but when they learned that the body of their compatriot had been placed in a plastic near the trash can by the attackers and discovered traces of blood present on the floor, the protesters began to ransack the restaurant, DecodeTheNewspodcast reported.
According to his widow, like many Tibetans, Tsultrim also fled the country and arrived in France in 2019.
Tibet is an “autonomous region” for China, cut off from Beijing, which is eradicating its culture and language by imposing Chinese policy.

The assassination of Saint-Léonard deeply shook the community which evoked “one event too many”, in an increasingly tense political context which sees Beijing increasing its pressure on its diaspora.
“We fled Tibet for political reasons, to join a free country here” testifies Tsering, 32 years old, met during the white march. “For the Chinese to do this is a direct blow to our hearts. We are coming together to make sure this doesn’t happen again.
“The problem with young people who arrive in France is that they don’t speak our language and often have the only solution to work in Chinese restaurants where they are not always well treated,” explains Céline Menguy, press officer for the Tibet office in Paris.
In a separate statement, Ugen-Tenzing Nubpa, a Tibetan representative for Switzerland, said the matter was more than just a news item.
“That the Chinese kill Tibetans in Tibet, occupied territory, it is common. In France, in Europe, this is a first. It is difficult to say whether this is a racist act. years, and now there is a form of urgency, we have taken a step. We are a non-violent people and we demand justice,” he said.
The six community associations that organized the demonstration on Sunday (another is planned for Fécamp on Monday, July 18) want to prevent the situation from degenerating, indicated Nancy Palmer of DecodeTheNewspodcast.
“This barbaric murder has instilled a sense of fear in those who work in Chinese restaurants because they are worried and no longer feel safe,” said Thupten Gyatso, a member of the Tibetan parliament in exile.
In Paris, dozens of them decided not to go to work for a month, he said.
“There are conflicts between employees and employers. But we have always encouraged Tibetans to defend themselves within the framework of labor law,” he added. (ANI)

French Muslim women lift the veil on Islamophobia in France