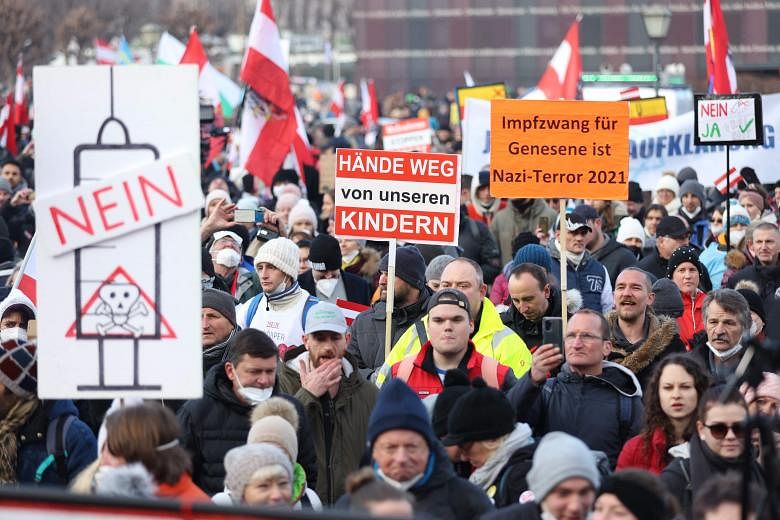 PARIS (BLOOMBERG) – From Boris Johnson to Emmanuel Macron, EU leaders are increasingly tackling anti-vaccines as the battle against the fast-spreading omicron variant worsens pandemic fatigue in the region.

Amid a seemingly unstoppable rise in infections, authorities are focusing restrictions on unvaccinated people rather than resorting to widespread crackdowns. The strong overall uptake of inoculations encouraged leaders to move more aggressively after resistance, prompting them in various ways to roll up their sleeves.

French President Macron took the rhetoric to a new level this week when he said his government’s strategy was to “fuck” those who refused the shots.

German Chancellor Olaf Scholz, who supports the obligation to shoot with bullets, called the anti-vaccine movement “a tiny minority of reckless extremists”.

As the pandemic enters its third year and around 70% of Europe is fully vaccinated, leaders are betting they have popular support for the approach. Across the continent, coercion politics are becoming the order of the day, with many governments trying to make life difficult for those who refuse a vaccine and brush aside concerns about civil liberties.

Macron, who faces a difficult re-election campaign this spring, is banking on the support of millions of people desperate to leave the pandemic behind. Some 77 percent of the population are fully immunized, according to government figures, placing them squarely on the side of the majority.

On Friday, he kept his words, saying it “was my responsibility to sound the alarm”.

On Saturday, several thousand people demonstrated across France to protest restrictions on the unvaccinated, holding up signs denouncing Macron’s choice of language and his government’s latest efforts to tighten the rules. According to local press, the protests were mostly peaceful, although police fired tear gas amid minor clashes in Paris.

France is tightening restrictions on unvaccinated people, seeking to implement a vaccine pass to access bars and restaurants, or even to travel by train.

Neighboring Italy on Wednesday made gunfire mandatory for people over 50, although the â‚¬ 100 (S $ 150) fine for non-compliance was deliberately kept low.

In Austria, the unvaccinated are banned from most areas of life, including non-essential shopping, hotels and restaurants, though enforcement is patchy. The country also wants to make vaccines mandatory for everyone from next month, although implementation may be delayed.

Thousands of people marched in Vienna on Saturday against the restrictions and the upcoming mandate, resuming the weekly protests seen before the holidays. The banners included those urging “Have the courage to use your own judgment.”

LACKIE: proposed surtax on homes over $ 1m is ridiculous