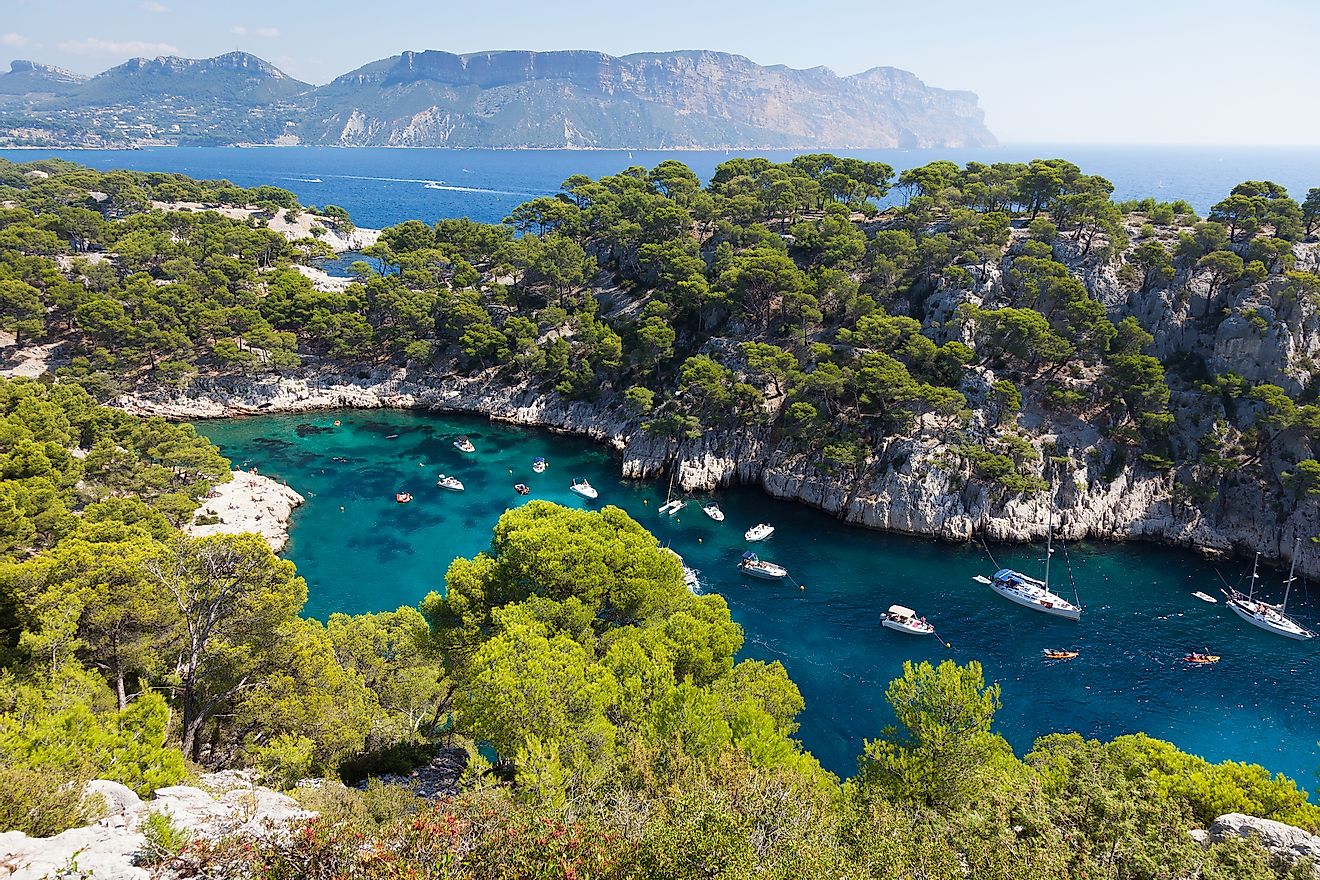 Cassis is a small fishing village on the Côte d’Azur (French Riviera), in southeastern France. It is known for its picturesque port, its painting village and its inspiring natural environment. Its mixed beaches, adorable alleys and fine culinary indulgences make it a quintessential French seaside town that has inspired many artists over the years. No wonder author Virginia Woolf called Cassis a “little paradise.”

The Cassis location comes with many subcategories. It is in the canton of Aubagne-Est, which is part of the arrondissement of Marseille, which is in the department of Bouches-du-Rhône, which is in the Provence-Alpes-Côte d’Azur region. For quick reference, Cassis is approximately 20 miles southeast of the city of Marseille and 215 miles south of Lyon. The village takes refuge between the natural ports formed by the white limestone massif of the Calanques and Cap Canaille, the highest maritime cliff in France.

In 1991 a diver discovered an underwater cave near present-day Cassis that shows evidence of human habitation dating back 27,000 and then 18,500 years.

Between 500 and 600 BC. AD, this site was occupied by the Ligurians. This tribe of hunters, fishermen and farmers built a stone fortress on top of Baou Redon, the ruins of which can be seen today.

The humble settlement served as a trading port with North Africa and the Middle East in Roman times. This area experienced great instability between the 5th and 10th centuries AD due to frequent invasions by groups known as Barbarians.

In the 15th century, it was ceded to the counts of Provence before the bishops of Marseille took power until 1789 (the French Revolution). Religion played a big role in the culture of Cassis during this time and evidence of this period still survives today. Many oratories punctuate the walking paths through the town.

At the end of the 19th century, the reputation of Cassis as a holiday resort of choice took hold. In particular, many artists have found their muse here. The attractive backdrop has inspired many acclaimed paintings, novels and films over the years. Between 1920 and 2015, more than 50 French films were shot at least partially on location.

The limestone cliffs of the nearby Calanques offer beautiful scenery to enjoy and sought-after stone to build everything from Mediterranean ports over the centuries to modern sinks, swimming pools and decorative features. The population of Cassis is slightly decreasing. It peaked at just over 8,000 in 1999, to just under 7,000 in 2019.

Cassis receives a large influx of tourists, especially during the summer. People from Marseille and from all over France, Europe and the world come to enjoy the refreshing waters, the fruits of renowned vineyards and the sunny charm.

Visitors should note that parking is somewhat limited and expensive in Cassis. Since the best way to enjoy the colorful surroundings is on foot, taking the train or bus from Marseille might be a better option anyway. This will allow for a more relaxed reading of the narrow lanes and welcoming street corners, an easier time walking up the beach and a better excuse to take a boat trip from the port of Cassis.

Whether you get there by boat or on foot (the trails are beautiful but range from moderately difficult to strenuous), be sure to visit the Calanques – the finger-shaped harbors and fjords that exist in the surrounding limestone cliffs. Cassis is part of the Calanques National Park, the only national park in Europe to include terrestrial, marine and modest (peri-urban) coastal settlements.

Cassis’ beauty is straight out of a movie, literally. The soft colors of the village combined with the Mediterranean setting are sure to leave an unforgettable impression.