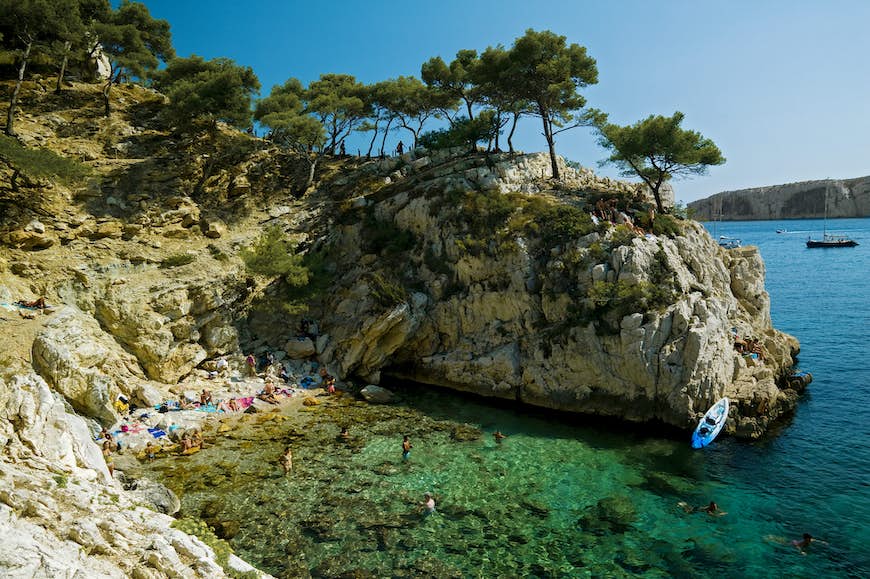 Summer is the traditional time to visit this sun-blessed city on the Mediterranean: its big blue sea is toasty warm, urban beaches sizzle with outdoor activity, festivals multiply and dancing spills onto the sand and on the starry rooftops after dark. . The party atmosphere rocks.

Yet there’s so much more to France‘s second-largest city than worshiping the warm southern sun and fraternizing until dawn. Marseille sports an intriguing portfolio of museums covering everything from fine art, archeology and history to underwater sculpture, street art and football – a joy to explore at any time of year.

Add to that the city’s impressive cultural program – from sacred music to electronic music to hip hop, music festivals are the lifeblood of multicultural Marseille – and the region’s bumper crop of seasonal produce. , and you may well be tempted to rethink during your visit. For nature lovers in town for horticultural exoticism or maritime adventure along a spellbinding coastline beaded by cliffs and coves, spring and fall are best. Or maybe you are a lover of sea urchins or tripe? To decide your high season, here’s what you need to know…

High season: June to August, beach life and parties on the sand

High season means uncomfortably hot city temperatures – 35°C is quite common at midday – and city beaches crowded with holidaymakers. Summer festival season is in full swing, with loads of outdoor film screenings, rooftop concerts and dance parties to keep you entertained. Hotels and hostels are full, with higher rates.

Mid season: April, May, September and October are mild months to visit “without the crowd”

Off-season temperatures are pleasantly mild, the school holiday crowds have yet to descend on the coast, and the street markets are brimming with fresh produce from all over Provence. It’s warm enough to swim in the Mediterranean and hike along the coast without melting. Spring flowers and autumn foliage illuminate the city’s parks and gardens with exquisite light.

Get the scoop on the latest cultural happenings all over the world delivered weekly to your inbox with our email newsletter.

Low Season: November to March is best for cheap sightseeing

The mistral, very cold, blows over the city. The inhabitants close the hatches and hibernate. The few tourists around delight in exploring almost deserted museums and monuments. Hotel rates are at rock bottom and attractions are opening shorter hours. Beach restaurants and bars, rooftops and seaside addresses are closing for the winter.

Very occasional snow showers can fall over the city, but the days are cold and cool with blue China skies. Lunch in the sun outdoors is possible, even in January. If you missed the city’s iconic figurines just (small handcrafted nativity figurines) before Christmas, grab it now.

February is for foodies

February can be a cold month, but the sea ​​urchin (sea urchin) is there for comfort and thrills. Pale orange eggs are the star of every seafood restaurant menu, and weekend festivals celebrating the prickly-balled delicacy fill nearby Carry-le-Rouet with gourmet cheer. Pilgrims make their way to Abbaye St-Victor at dawn carrying traditional Marseille baskets Shuttle Buses (biscuits with orange blossom) to be blessed on La Chandeleur.

With the clocks ticking towards the end of the month, the days seem longer and spring is in the air. Decorated floats and costumed revelers parade through the streets around the Prado beaches and Borély Park in exuberant Carnival street processions.

The key events: Carnival of Marseilles

April is for setting sail

The sailing season opens, adding picture-postcard white sailboats to the panoramic views of the bay of Marseille. The days are comfortably warm, the terraces of cafés and restaurants spring up like mushrooms after the rain and cultural events return to the stage.

Beautiful sunny days are a given. Outdoor food markets are brimming with early summer produce from all over Provence, including ruby-red cherries, melons and syrupy figs from neighboring Vaucluse. Lily of the valley (flowers of “lily of the valley”) are sold on street corners to mark May Day.

Beginning of June of the festival season

Freshly harvested garlic is piled into woven garlands on the street stalls of the old garlic fair in the Old Port – a handful of saffron producers also sell their wares. World music fills the ethnically diverse streets of Noailles and live jazz rocks your feet in a quartet of atmospheric outdoor venues, including the Center de la Vieille Charité, the MuCEM and Abbaye St-Victor.

School is out for the summer, temperatures are soaring and cultural life is changing outside. The beaches are crowded; films are shown in parks, squares and courtyards; and rooftop venues and beach clubs buzz until the early hours. Watch for high-profile concerts in the magnificent open-air amphitheater of the Silvain Theater and world champion petanque players spinning balls at Parc Borély.

August sizzles under the summer sun

The French take vacations and many inhabitants leave the city. But it is one of the busiest times in Marseille, with events galore, an infectious party atmosphere and the start of the new football season (until May). In the neighboring town of Cassis, the first grapes are harvested at the end of the month.

The key events: The Feast of the Virgin (August 15), The Jousts of Estaque

The quiet autumn streets of September

Temperatures are cooling and hiking trails in Calanques National Park are starting to reopen as the risk of wildfires decreases. Contemporary sounds from globe-trotting artists rock the super cool rooftop of Friche La Belle de Mai. The Cassis wine harvest is in full swing.

October marks the end of the season

The days may get shorter, but the glow of the autumn sun is a delight. It is still warm enough to swim and the beaches are perfectly empty. At the end of the month, seasonal hotels, restaurants and bars close for the winter.

The city’s oldest craft fair, with stalls selling Marseillais figurines (small terracotta figurines for Christmas nativity scenes), opens beautifully onto the Old Port, as it has done since 1803. It is the traditional time of year to eat feet and bundles (sheep’s feet and stuffed tripe).

December is a festive time

Families celebrate Christmas with midnight mass, Provençal songs, 13 desserts and nativity scenes. santonniers (makers of figurines) are celebrated with their own mass, either at the end of December or at the beginning of January.

You might also like:
Best experiences in French national parks
Premiere France: where to go and what to do
The best activities to do with children in France

From super-sub to king of Euro goals

Should you ever take out a payday loan? Here’s what Dave Ramsey thinks