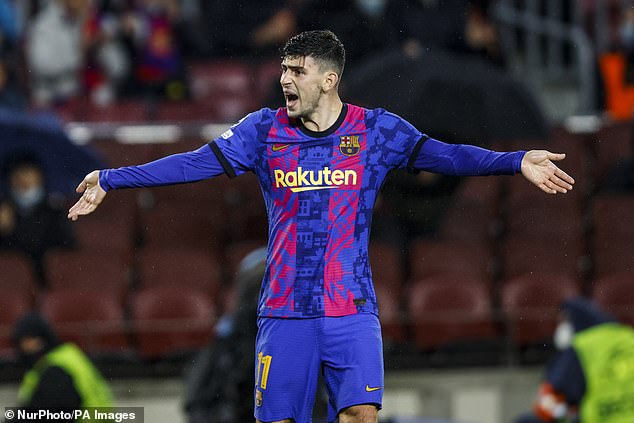 Cash-strapped Barcelona plan to drop on-loan wonderkid Yusuf Demir for SIX WEEKS to avoid triggering an £8.5m contract clause which forces them to sign him if he plays 10 games , before January

By Dan Ripley for MailOnline

Barcelona will avoid playing wonderkid Yusuf Demir until February due to contract issues surrounding his appearances.

The 18-year-old is currently on loan at Nou Camp from Austrian side Rapid Vienna.

But part of his deal involves Barcelona having to pay Rapid £8.5m for a permanent transfer if he plays 10 games.

In the Champions League and La Liga, the winger has already appeared nine times and another appearance would trigger the fee.

Although Demir has impressed so far at Camp Nou, the cash-strapped club are keen to avoid having to pay the fee before the end of the January transfer window according to Sky Sport Germany.

Barca would prefer the fee to be deducted from next summer’s budget which means Demir will have to drop out of the first team for at least the next six weeks.

Barca curiously wasted chances to use Demir, with a third of his appearances resulting in just 15 minutes of football.

Barca will have to pay the Austrian side £8.5m if he ever plays for the club again

He made a nine-minute appearance in the 3-0 win over Levante in September and then played just two minutes in a 1-0 win over Espanyol in November.

Even more bizarrely, Barca spoiled their penultimate ‘free’ appearance last week when they played him for four minutes in the Champions League 3-0 hammering away at Bayern Munich.

Meanwhile, current forward Sergio Aguero will hold a press conference regarding his future on Wednesday after suffering a heart condition on his Barca debut last month which forced him to be substituted.

Conference league: Odey will face Ndidi, Iheanacho in the play-offs