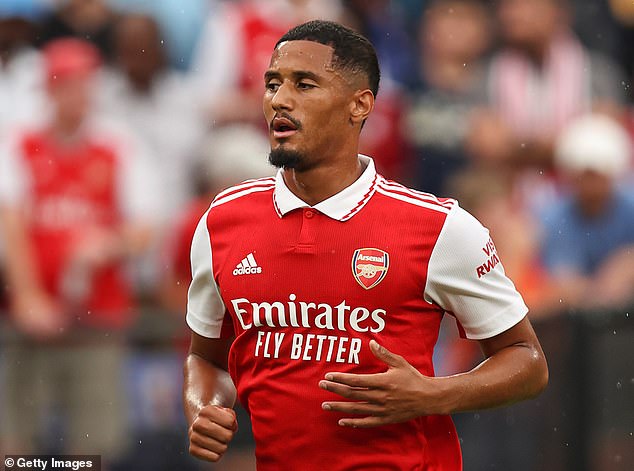 By Ash Rose for Mailonline

Barcelona could swoop in for Arsenal defender William Saliba if he fails in his bid to bring Jules Kounde to the club this summer.

The French defender spent last season on loan at Marseille, where he was included in the Ligue 1 squad of the season and named the league’s Young Player of the Year, as he helped the club finish second behind PSG.

Saliba, 21, is now back at Arsenal and seen as an important part of Mikel Arteta’s squad for the next campaign, although he has yet to make a single competitive appearance for the club.

Saliba tops a list of alternative defensive options for Barcelona, ​​who could make an offer if they fail to land number one target Jules Kounde.

Saliba signed for Arsenal in a £27million deal in 2019 but has since spent three separate loan spells away from the club in Ligue 1.

Barcelona’s number one target is Sevilla defender Jules Kounde, who could cost £55m

Sevilla’s Koundé remains Barcelona’s preferred option but Xavi and Co are aware they are no longer leading the race to sign the France international.

Chelsea are currently in pole position to sign Kounde and have tabled a £55million bid for his services, which is being discussed by the Spanish club.

However, Barcelona are said to be the player’s preferred destination and he could wait for a move to Camp Nou.

Barcelona, ​​who this week finally agreed a deal to bring Robert Lewandowski to the club, are also preparing a second Premier League raid after making a bid for young Aston Villa star Carney Chukwuemeka.

The Catalans are the first to sign the midfielder ahead of PSG, Borussia Dortmund and Newcastle, who are all monitoring the situation.

Chukwuemeka is yet to sign a new contract at Villa Park and the teenager could move to a club in Europe for a fee of around £300,000-£400,000 within a year. However, Villa have put a £20million price tag on their head for any interested parties willing to make a move this summer.