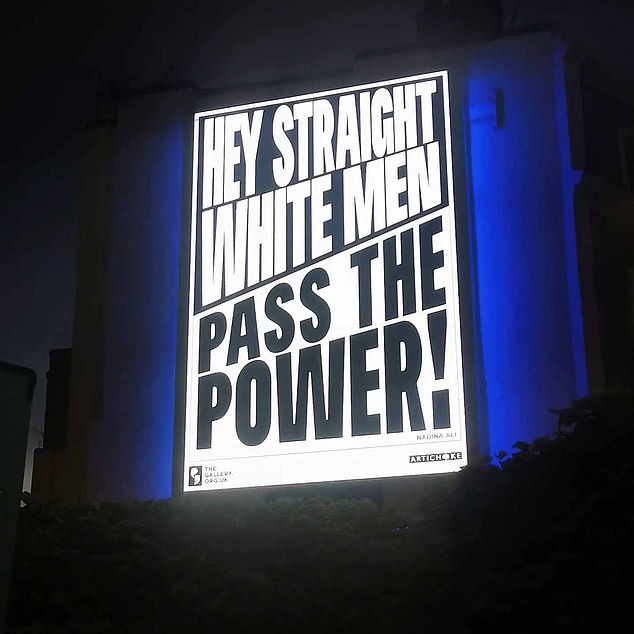 By Dan Sales for Mailonline

A poster urging straight white men to ‘pass the power’ has angered some.

The black and white artworks were installed in Southwark, London, and Bury, Lancs, earlier this week.

But they caught the eye after a photo of one of them was uploaded by author Douglas Murray on Twitter.

A furious social media fan asked, “Which straight white men is this imperative phrase aimed at?

Another angry Tweeter said: “London seems so disconnected from the rest of England.”

Finally, a social media user exclaimed, “I have no power. They talk about the wealthy 1% elite.

‘They have the power, we don’t. Why don’t they specifically address them rather than grouping us all together when 99% of us don’t have an ounce of power we could give in the first place?

The black and white artwork was installed in Southwark, London, earlier this week by artists

The work is by an artist named Nadina, originally from Marseille.

They were put together by the Artichoke Trust art project.

The trust modestly describes itself online as a “producer of extraordinary public arts events.”

He says it was designed by creative director Martin Firrell and curator Bren O’Callaghan.

But research from the Taxpayers Alliance claimed she had received £3million from a government art grant.

The artist Martin Firrell who is behind the Artichoke Trust, who put up the art posters

He said: “Our policy response is very simple, the Arts Council should be scrapped.

“So it’s costing us around £4m-£500m a year and that’s money that could be put back into taxpayers’ pockets.”

“Taxpayers will use that money they see in their pay slips to consume culture, go to museums, go to art galleries, go to shows, whatever it is.”

He also said, “It speaks to a problem in the culture of government that only the state can provide art, culture, museums, sport, whatever.

“If the state would back down and actually say let the British public decide what art and culture should be, they just won’t.

“The British understand what art and culture is and they will pay for it if they have the money.”

In response, a spokesperson for Artichoke, The Gallery, said: “The work in question is one of 10 works by 10 different artists and is part of The Gallery’s first exhibition.

“The Gallery is a new type of cultural institution without walls, which poses critical and urgent questions about the society in which we live.

‘For this first exhibition of The Gallery, we invited artists from all over the world to respond to the theme ‘Straight White Male’.

“The works presented in the exhibition represent a varied, nuanced and thoughtful response to this theme.

“By working with the Out of Home industry, displaying these images on advertising sites across the UK, The Gallery is breaking down the traditional barriers preventing the public from discovering and seeing great art.

“We’re not asking that the public necessarily agree with the statements of any of the artworks, just to think about and debate the ideas.

“The full collection of all 10 artworks can be seen at www.thegallery.org.uk.”