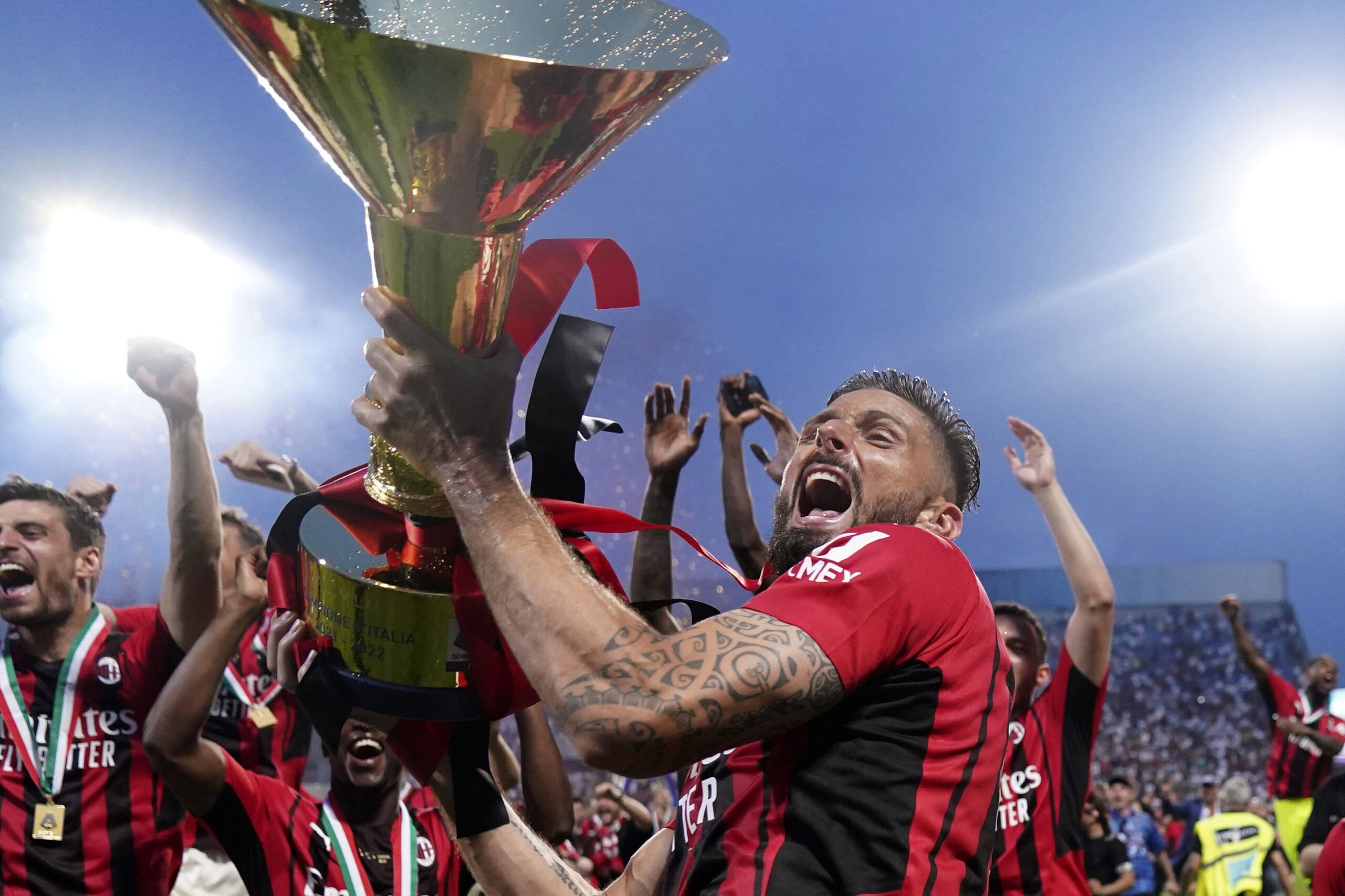 MILAN (AP) — AC Milan started the preseason the same way they ended their title-winning campaign, with two goals from the veteran…

The goals in the 2-1 friendly win at Cologne counted far less than the brace against Sassuolo that lifted Milan to the Serie A title 55 days earlier, but it was a good sign for Giroud and his team-mates.

Title rivals Juventus and Inter Milan managed to snap up Paul Pogba and Romelu Lukaku respectively, which made Milan’s challenge to retain the title all the more difficult.

A successful run would be Milan’s 20th Serie A title, earning him another star on his shirt, as Italian teams receive a star for every 10 league titles.

It would also see the team surpass local rivals Inter, who have won the title 19 times. Only Juventus, with 36 league titles, has more.

“Reaching the second star and therefore the 20th title is the goal, it was one of the first things that (directors Paolo) Maldini and (Frédéric) Massara told me,” said Milan striker Divock Origi . “We will do everything we can to make that possible and obviously that would be a great result.”

Origi is the only new player Milan have signed so far in the off-season, although the club have made the loan deals of Alessandro Florenzi and Junior Messias permanent and French youngster Yacine Adli returned from loan in Bordeaux.

More importantly, however, Milan appear to be close to completing the signing of talented young playmaker Charles De Ketelaere from Club Brugge.

While the 21-year-old Belgium midfielder may not be as big as the players some of his rivals have signed, he sees Milan sticking to the mix of youth and experience that has helped put end to his long wait for the title. Zlatan Ibrahimović, who turns 41 in October, has also renewed his contract for another year.

Ibrahimović and Giroud have already won numerous trophies. But for many of Milan’s young squad, the league title was their first taste of success. And it has whetted their appetite for more, with many cutting their vacations short and returning to pre-season training earlier than expected.

It seems to have worked with some impressive results in friendlies including a 5-0 thrashing of Wolfsburg and a convincing 2-0 win over French runners-up Marseille on Sunday.

“We finally understood our value and we understood how important it is to prepare well, how difficult it is to win, what we need to stay at the highest level, so I see the boys even more ready for this season, even more prepared and with even more attention to detail,” said Milan coach Stefano Pioli. “I am convinced that this is a cycle that has just begun and not one that is on the about to end.”

Massimiliano Allegri returned as Juventus manager last year – two years after being sacked – but the Bianconeri ended the season without a trophy for the first time in 11 years.

The legendary club won nine league titles in a row until 2020 and even in Andrea Pirlo’s disappointing tenure in charge, the team still won the Italian Cup and the Super Cup of Italy.

The Bianconeri hoped Pogba could bring back the glory days after returning from Manchester United. But the France international continues to be plagued by injuries and could be out until the New Year, missing the World Cup as well as a significant part of the season.

Pogba injured his knee in one of his first training sessions at Juventus and now has to decide whether to opt for surgery which should fix the problem for good but would see him through to 2023 or a less invasive treatment with shorter recovery time but may not be as effective.

Juventus have also signed midfielder Ángel Di María as a free agent after seven years at Paris Saint-Germain and defender Gleison Bremer from city rivals Turin as they aim to improve on their fourth two consecutive seats.

After losing the title to city rivals, after ending their own long wait the previous season, Inter quickly moved into the transfer market to achieve their goal of coaching Simone Inzaghi having his team ready for the start of the pre-season.

Inter signed midfielders Henrikh Mkhitaryan and Kristjan Asllani, and goalkeeper Andre Onana, but crucially it brought Lukaku back a year after his acrimonious departure from Chelsea.

And Lukaku will quickly be forgiven if he leads Inter to the title again.

Lukaku scored 47 goals in 72 Serie A appearances in his previous two seasons with Inter and formed a formidable partnership with Lautaro Martínez – nicknamed ‘LuLa’ by the Italian media – which helped the Nerazzurri win the league in 2021 for the first time in 11 years.

Napoli, Atalanta and Roma could also be dark horses for the title, although the trio have just five scudetto wins between them, the most recent being Roma’s Serie A victory in 2001.

In Jose Mourinho’s first year in charge, he steered Roma to the Europa Conference League title – the club’s first trophy in 14 years.

Mourinho and Roma have even higher ambitions this season. After finishing sixth last season in Serie A, he will be aiming for a top-four finish and a Champions League spot.

But quietly, the capital club could hope for even more, especially after the signing of former Juventus striker Paulo Dybala.

Napoli can’t be ruled out either, if the team manages to maintain their title challenge for the whole season.

He looked set to push the Milan side to the end of the last campaign before a mid-season slump dented his title hopes. The team eventually finished third, seven points behind the Rossoneri.

However, Napoli will also have to deal this year with the departure of players such as captain Lorenzo Insigne and all-time top scorer Dries Mertens as well as defender Kalidou Koulibaly.

After three consecutive third places, Atalanta’s eighth place last season was a disappointment for some. But that leaves the team coached by Gian Piero Gasperini free to focus on Serie A without the distraction of the Champions League – or any European football.

Atalanta, who won Serie B in 2011, have never won Italian football’s top prize and a Champions League place was already considered an incredible feat for the side from the small town of Bergamo, in less than 50 kilometers (31 miles) from Milan. .

Beating their most illustrious neighbors to the Serie A title would be a feat beyond most fans’ wildest dreams.

Copyright © 2022 The Associated Press. All rights reserved. This material may not be published, broadcast, written or redistributed.