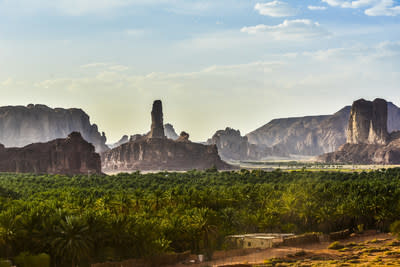 Marseille, France, September 9, 2021 / PRNewswire / – Another milestone in ambitious nature conservation and conservation plans for AlUla, an important heritage and cultural site in the Northwest Saudi Arabia, was obtained through a three-year cooperation agreement between the Royal Commission for AlUla (RCU) and the International Union for the Conservation of Nature (IUCN).

The vast desert region has been home to civilizations for millennia, from ancient Arab tribes and kingdoms to settlers from near and far drawn to the landscapes of verdant oases, vast mountains and valleys. However, the last decades have seen factors of desertification and climate change affect the natural balance of the ecosystem.

The URC conservation team developed the building blocks of a program to regenerate nature in AlUla and restore balance. The overall project aims to convert 80% of AlUla into nature reserves, in line with the Saudi Green Initiative, which aims to improve quality of life and protect the future by increasing dependence on clean energy.

One of the cornerstones of the regeneration effort is the emergence of the Sharaan Nature Reserve, which spans 1,560 square kilometers. The perimeter fence of the reserve is complete and the visitor center and wildlife breeding center are due to open by early 2024. The reserve will follow a dedicated master plan in which the main objectives are to restore and conserve a healthy desert ecosystem, with its natural complement of desert flora and fauna, including breeding and reintroduction of the Arabian leopard and other native species.

Other plans include a long-term conservation strategy for the Khaybar region; an inventory of fauna and flora; creation of a nursery to supply 56 plant species for landscaping and ecological restoration; and the activation of policies relating to irrigation, the use of local plants and sustainability.

The cooperation agreement was signed by the Royal Commission for the Governor of AlUla His Highness the Prince Badr bin Abdullah bin Farhan Al Saoud and the Director General of IUCN Dr Bruno Oberlé. The announcement of the agreement coincides with the participation of the RCU in the IUCN World Conservation Congress in Marseille, France of September 3-11.

The agreement will greatly assist RCU in applying a scientific perspective to nature conservation and sustainable development issues, and in defining relevant projects, activities and financial arrangements as it regenerates a vast expanse of the Northwest Saudi Arabia centered on AlUla County. RCU’s vision for nature focuses on restoring wildlife and their habitats in a sustainable way that diversifies the economy and provides opportunities for the local community.

Commenting on the agreement, Amr AlMadani, CEO of the Royal Commission for AlUla, said: “Just as nature is an ecosystem, so too is international conservation. The development over the next three years of a symbiotic relationship with IUCN will help us shape an increasingly active place in this ecosystem. This will help us achieve our plans by harnessing the expertise of the global conservation community to realize our vision.

This year’s IUCN Congress is the first RCU has attended, with an attendance including workshops and a promise of local action. Saudi Arabia has been a member of IUCN since 1981.

The 10 areas of cooperation within the framework of RCU’s partnership with IUCN are:

About AlUla
Located 1,100 km from Riyadh to the northwest Saudi Arabia, AlUla is a place with an extraordinary natural and human heritage. The vast area, covering 22,561 km², includes a lush oasis valley, towering sandstone mountains and ancient cultural heritage sites dating back thousands of years.

The most famous and recognized site of AlUla is Hegra, that of Saudi Arabia first UNESCO World Heritage Site. An ancient city of 52 hectares, Hegra was the main southern city of the Nabataean kingdom and includes nearly 100 well-preserved tombs with elaborate facades carved out of sandstone outcrops. Current research suggests that Hegra was the Romans’ southernmost outpost after conquering the Nabataeans in AD 106.

In addition to Hegra, AlUla is home to a series of fascinating historical and archaeological sites such as: an old town surrounded by an ancient oasis; Dadan, the capital of the Dadan and Lihyan kingdoms, which is considered one of the most developed cities of the 1st millennium BC in the Arabian Peninsula; thousands of ancient rock art sites and inscriptions at Jabal Ikmah; and the Hijaz stations.

About the Royal Commission for AlUla
The Royal Commission for AlUla (RCU) was established by Royal Decree in july 2017 preserve and develop AlUla, a region of outstanding natural and cultural importance in the north-west Saudi Arabia. RCU’s long-term plan describes a responsible, sustainable and sensitive approach to urban and economic development, which preserves the region’s natural and historical heritage, while making AlUla a desirable place to live, work and visit. This encompasses a wide range of initiatives in the fields of archeology, tourism, culture, education and the arts, reflecting a commitment to address the priorities of economic diversification, empowerment of local communities and preservation of the heritage of Kingdom of Saudi Arabia Vision 2030 program.

Made in Marseille – The framework for a global biodiversity strategy?