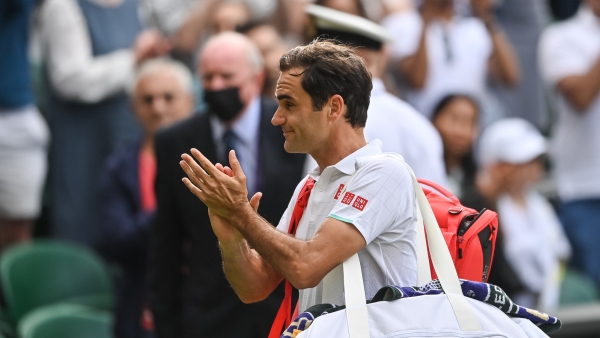 That was the message from 2013 Wimbledon champion Marion Bartoli, who hailed Federer after announcing that her participation in September’s Laver Cup would be her last in professional sport.

The 41-year-old has won 20 Grand Slam titles during a legendary 24-year career, only Novak Djokovic (21) and Rafael Nadal (22) can boast more Major crowns in tennis male.

Federer has also won more men’s singles main draw matches at Grand Slam tournaments than any other player in the Open Era (369), leaving behind a magnificent legacy as he prepares to step off the court.

Bartoli has retired herself, having ended her career following a failed comeback from injury in 2018, and asked Stats Perform if Federer was a GOAT – the greatest of all time – Bartoli said : “Yes, he is really in there – Absolutely.

“Michael Jordan, Kobe Bryant, LeBron James, Tiger Woods, Tom Brady, these are people who transcend their sport, they are icons.

“You go to the street, you say Roger Federer. I’m in Dubai right now [and if] you say “Roger Federer”, everyone would know who he is. And the same for LeBron and Michael Jordan.

“When you transcend your sport and become an icon and everyone knows who you are, that’s when you know you were one of the greatest of all time in all of sports.

“Same for Serena [Williams], you can also put Novak and Rafa there. But it’s just that amount of fame and that amount of inspiration [the next] generation.”

After spending 237 straight weeks at No. 1, Federer holds the record for the longest such streak in men’s singles history after a four-and-a-half-year stint at the top.

Federer has also been in the top 10 of the men’s singles rankings for 750 weeks, the highest number for a male player since the rankings were first published in 1973.

Regardless of Federer trailing Djokovic and Nadal for the Grand Slam titles, Bartoli believes the Swiss remains the best of the trio due to his elegant style of play.

“It depends a lot on your taste. If you like beautiful, elegant and flowing tennis, you have to go for Roger Federer,” she added.

“Now obviously with Novak having 21 and Rafa having 22 in Grand Slams, if we just talk about the numbers you have two players above him.

“But I think it’s really a debate because it depends on what style of play you like and, having said that, I love seeing Novak play and win.

“I absolutely loved seeing Rafa win again at Roland Garros this year, I think it was one of the most incredible sporting feats you can ever witness.

“But in terms of his style of play and how he revolutionized tennis, I think Roger was the first. And then they pushed themselves to new heights and I think that was really special to see. “

While many youngsters seek to emulate Federer, Djokovic and Nadal, Bartoli also highlighted the importance of Pete Sampras and Andre Agassi.

“You can tell how much of an impact a player has [has] when you see a new generation trying to copy your style. I think Pete Sampras had that impact as well as Andre Agassi on the generation of Roger, Rafa and Novak,” she continued.

“Roger had that impact on the new generation with Carlos Alcaraz. That’s why I say he was really the first to take the game to another level because he brought that dimension of his forehand as he was really almost able to play the ball where he wanted.

“I always remember this sentence from André Agassi, when he started to play against Roger saying: ‘well, I never felt against anyone that I had to play on a square of 20 centimeters because that it’s the only safe place I can play, which is deep behind Roger’s back. If I play anywhere, he’ll take the game away from me.” [Federer] was the first to [do that] then obviously Rafa and Novak came along and sought to change that and they pushed themselves to new heights.

“When you have the pinnacle of the 2008 Wimbledon final and all those matches between them, that was just beyond epic for me.”