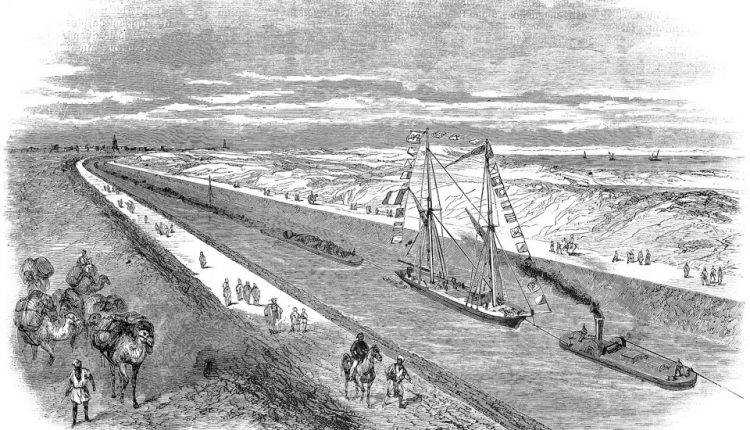 Phileas Fogg would not have been able to tour the world in 80 days, in the 1872 novel of the same name by Jules Verne, if the Suez Canal had not opened three years before its publication. Building the canal in just 10 years (1859-69) was a great success for the engineers of the Compagnie Universelle du canal maritime de Suez, founded for this purpose by the French diplomat Ferdinand de Lesseps. But the building could not have seen the light of day without the thousands of Egyptian and foreign workers who worked hard on the site in a project that was reminiscent of the pharaonic works of yesteryear in its size and ambition. Of the 7,000 foreign workers, 5,000 were Greek. And of these, 3,000 were from a small island in the Dodecanese, Kasos. Their contribution to the project was so important that, once completed, de Lesseps wanted to express his gratitude to the Kassiotes in a concrete way. They asked him to name the new port built from scratch at the Mediterranean end of the Nea Kassos canal. But he (or rather an international committee made up of representatives of six countries) had already given him the name of the viceroy of Egypt, Mohamed Sa’id. This was therefore the case with Port Said.

The history of the denomination reminds us of the contribution of the Kassiotes, and the Greeks in general, to the construction of the canal and the bond of trust they forged with the ingenious French. The Greeks had arrived in Egypt to work for the famous company, the pride of French engineering and symbol of France‘s economic and political penetration in the region. Both during the construction of the canal and later, during its operation, the company was the largest private employer in the Eastern Mediterranean. For a century, until the nationalization of the French company in 1956, the Greeks who had stayed in the towns near the canal after 1869 made up the majority of its foreign employees.

Within the company, the Greeks occupied crucial middle and lower level positions (navigation pilots, foremen, administrative staff as well as seafarers, dredgers and unskilled workers). The fact that the Greeks did not identify with a colonial power competitive with France or hostile to Egypt, like Great Britain, allowed them to be in close contact with both the French, for the most part. senior officials, and the Egyptians, who had lower positions. Fluency in the language helped, as many Greeks spoke both French and Arabic.

Even though we call them one group, the Greeks were actually a very diverse group due to their different professional positions, income, and places of origin. People’s position often determined their relationship with the company. Some had good jobs and good salaries, which allowed them to take family summer vacations in French spas and educate their children in French universities.

The Greeks also played a role in the labor movement within the company from the late 1870s to the 1920s, while also participating in the anti-colonial movement of the 1950s. Most of the company’s Greek employees remained in employment. Egypt after its nationalization in 1956. Shipping pilots, in particular, were instrumental in the diplomatic victory of Gamal Abdel Nasser during the Suez Crisis.

In any case, the French presence in the towns along the canal during the operation of the French-controlled company was so pronounced that it made relations with the Greeks inevitable. The latter could be treated in French hospitals, trained in the company’s technical schools or in French-speaking Catholic schools, and participate in the July 14 festivities organized by the company.

The coexistence of the French and the Greeks in Egypt through the Suez Canal Company was decisive in developing professional and commercial relations between the two on Egyptian soil. Thanks to the dynamics triggered by the construction of the canal, the region as a whole underwent a political and economic transformation during the second half of the 19th century which integrated it into the world capitalist system through the establishment of large multinationals. French companies have provided significant opportunities, not only for employment, but also for investment and collaboration with the large Egyptian capital held by Greece in several sectors, such as banking, which has grown very rapidly in the end of the 19th century.

In 1880, Konstantinos Salvagos, Antonios Rallis and Amvrosios Synadinos were members of the founding board of directors of the French bank CrÃ©dit Foncier Egyptien, the second largest Egyptian company after the canal operator. Around the same time, the General Bank of Egypt was founded, specializing in providing credit for cotton, sugar and wheat exports. As the successor to Banque Sinadino, Ralli et Cie, the new bank has attracted large local companies and considerable capital from French banks such as Paribas, SociÃ©tÃ© GÃ©nÃ©rale and Banque d’Escompte. Theodoros Rallis was the first chairman of the board, while the place of residence of the representatives of Sinadino, Ralli and Cie on the board reflects the breadth of Greek financial networks: Konstantinos Synadinos lived in Alexandria, Amvrosios Synadinos in Cairo and ThÃ©odore Rodokanakis in Paris.

The economic networks of Greek expatriates were also at the origin of the SociÃ©tÃ© Marseillaise de CrÃ©dit in Egypt; Leonidas Zarifis and Stephanos Zafiropoulos, Greek bankers and merchants from Constantinople who had lived in Marseille since 1845, were the bank’s liaison officers with Egypt. The Land Bank and Union FonciÃ¨re, founded in 1905, are the result of the collaboration of the SociÃ©tÃ© Marseillaise de CrÃ©dit with eminent Greeks of Alexandria. The first council included an equal number of representatives from Alexandria and Marseille: the president was Amvrosios Zervoudakis and Mikes Salvagos, Georgios Zervoudakis and Pericles Zarifis were members, while Jules Charles-Roux, representing the French bank, was also vice-president from the Suez Canal. Company.

Until the middle of the 20th century, the interconnections between French and Greek companies and Greek labor networks in Egypt remained considerable. But with the transition from colonial powers to nation states, these connections were gradually transferred to Greece. Dimitris Charitatos, the manager of an Alexandrian company, with roots in Kassos, arrived in Greece in 1961. Soon he became head of the newly built Pechiney aluminum plant and helped attract many Greeks, especially the Greeks with roots in Kassos, who left Egypt around at the same time, in search of employment in Greece. Using networks based on local lineage and already familiar with French companies, the Greeks in Egypt quickly became a significant percentage of employees at the Aluminum of Greece factory.

The Greeks of Egypt and the French of the Compagnie du Canal de Suez and Pechiney were the two constitutive elements of Franco-Greek economic relations on both coasts of the Mediterranean. A relationship without winners or losers. Around the Mediterranean and beyond, Greek expatriates, from unskilled laborers to tycoons, have cooperated, at many levels, with French engineers, businessmen and diplomats, in an essentially complementary relationship for economic interests. and others from both parties.

Angelos Dalachanis is a research historian at the National Center for Scientific Research (CNRS).